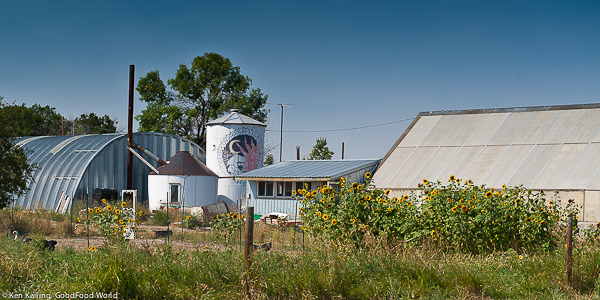 Will we lose our small local family farms? Will farmsteads be left empty and derelict? Where have all the farmers gone? Let’s keep them on the farm!

Yes, we are stating the obvious when we say that consumers have lost their connections with their food and the farmers, fishermen, millers, and bakers and all the people who grow and prepare it. Those lost connections have allowed Big Food and Big Ag to replace good healthy food with “not food” and “edible food-like substances,” as Michael Pollan calls them.

GoodFood World is an important platform to help remake the connections. In 2011 we visited more than 40 good food producers and providers in 30 cities across four states and British Columbia. We petted cows and goats in dairy barns, waded ankle-deep in shellfish beds and waist deep in grain fields, trotted down rows of vegetables and fruit, and walked numerous orchards, large and small. We had to brush the flour out of our hair each time we left a grain mill.

The following is a cross section of the many wonderful folks we met along the way. Read all our profiles here. 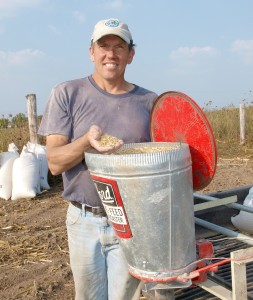 Rick Adamski, Full Circle Farm, on Co-operatives and Partnerships Quick! What is the first thing that comes to mind when you hear the words “dairy cows?” Probably black and white cows in a grassy field in front of a red barn, right? That’s the image that every confinement dairy operation would like you to imagine, but very few cows are raised that way. Rick Adamski, Full Circle Farm, Seymour Wisconsin, is a grazier. No, he doesn’t eat grass; he milks about 90 cows that do.

Five Generations of Dutch Farmers – Fresh Breeze Organic Dairy Dairy farming has made a full circle on the land where you’ll find Fresh Breeze Organic Dairy; five generations of Dutch farmers have made their living here, just south of the U.S./Canadian border. Farming methods have changed over the last hundred years, yet Shawn Langley’s great grandfather would surely have been comfortable on the farm today.

Organic Dryland Farming: Eastern Washington and Northwestern Montana For those who are trying to farm in the Palouse region of eastern Washington, northern Idaho, and northwestern Montana, there is only one name for it – Dryland Farming. Annual rainfall levels of 8 to 16 inches mean that farmers have to be good – very good – at moisture management.

Search and rescue – reclaiming farmland and an ancient grain Sam Lucy, grain farmer and land conservationist in the Methow Valley of north central Washington, is a one-man search and rescue team for farmland. He has spent the last 15 years seeking out and reclaiming fallow farmland and bringing it back to viable production or transitioning it into native grasses and other plants.

How to Buy a Flour Mill: Check Craig’s List Then one day, in June of 2007, Kevin Christianson was checking Craig’s List for bargains and came across this ad: “Fairhaven Organic Flour Mill for sale…” Kevin didn’t know a thing about flour or milling, but he was willing to learn and to work hard.

One Small Company’s Local Food Economy When most people are asked about the “Local Food Economy,” they talk about local farmers, food hubs and CSAs (Community Supported Agriculture). It’s not often that they think of a small manufacturer. Jack Jenkins, manufacturer and marketer of Country Living Grain Mills, is a unique member of one of Washington’s local food economies.

Let them eat bread! Amanda Irving and René Featherstone are an unlikely partnership and yet it takes both – the farmer and the baker – to turn an ancient grain like spelt into delicious bread. American consumers have strayed a long way from real food and real bread. René and Amanda are on the path that farmers and bakers have followed for millennia: growing good grain and making good bread. Long may that partnership last!

Jubilee Biodynamic Farm: Close Community Connections How does one farm feed nearly a 1000 people? No, it’s not the miracle of the loaves and fishes; it’s the miracle of good soil, organic cropping, rotational grazing, and a community of busy hands. Jubilee Biodynamic Farm, Carnation WA, supplies 400 families with fruit, vegetables, and meat through a Community Supported Agriculture (CSA) program – all from just 40 intensively-farmed acres.

Pick a Peck of Purple Peppers Minutes after meeting Hilario Alvarez in the packing sheds on his farm south of Yakima Washington, we were dashing after him down and across rows of peppers that were blazing with ripe fruit. Until you’ve stood knee-deep or, in some cases, waist-deep in dark green pepper plants, you have no idea how striking the colors of ripe peppers can be.

It All Began With An Apple (or Was It a Pear?) Farmers and orchardists who clearly love the land and the fruit and vegetables they grow are discovering creative ways to make unique products that consumers seek out and are willing to pay a premium for. We profile five Washington orchards ranging from Broetje Orchards, a very large commercial and organic orchard, to four small artisan growers and producers of a variety of organic tree fruit including apples, pears, and stone fruit.

A New (Old) Way to Raise Meat Over the last 70 years, the beef industry has changed considerably, evolving into an intense, industrial enterprise designed to put as much weight on as many cattle as fast as possible and get the resulting meat to market as quickly as possible. In response to the damaging impact of feedlot production, more and more farmers and ranchers are choosing to return to – and improve upon – traditional methods of raising cattle on grass.

Grass Farming on the Bluffs Above the Mississippi River: On the Road in Minnesota Situated on a high bluff overlooking the Mississippi, the 50-acre Richard Malinowski farm is a mix of oak woods and open pasture. Currently the cattle are rotated among 5 paddocks spread across 20 acres; in past years as many as 50 cattle a year were finished here, with cows and calves housed at a second farm nearby.

Melissa Lines: Farmer, Shepherdess, Educator, Marketer Running a farm and raising fifty or more sheep, a handful of beef cattle, and two horses is not a job for the faint of heart. And Melissa Lines is NOT Little Bo Peep. It was a farm visit when she was 4 years old that convinced Melissa that she wanted to work with animals, but it took decades – and a corporate career – to bring her to the point where she could actually make it happen.

A Tale of Two Fish – Which Would You Rather Eat? We are just beginning to understand that we may soon reach the end of the line – pun intended – for some of our “keystone” fish species: salmon, sea bass, cod and tuna. Top chefs in the US and Europe are pushing for sustainable seafood; “sustainable sushi” bars are popping up in cities across the country; and food service giants are offering sustainable seafood. But how is a discerning consumer going to find good quality, sustainable fish to purchase for his or her own table? 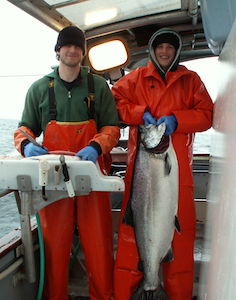 It’s Spring! It’s Salmon Season!! While one of the true signs of spring is fresh LOCAL asparagus; here in Puget Sound we have a second measure – salmon! Jon and Paula, from Wild Salmon Seafood Market, have put together this great chart of wild salmon “openers” to help you choose the kind of salmon and the source.

Breakup of Farms into 5-acre Farmettes Puts Shellfish at Risk Shellfish production is a $100 million business in Washington, and Samish Bay contains many thousands of acres of shellfish farms. Nonpoint pollution, most often caused by agricultural runoff, has closed the shellfish beds repeatedly over the last several years. Now both Skagit County and the state of Washington are focusing on the problem.

We believe 2012 will be the year of the small food producer: local, sustainable, socially responsible good food professionals on whom our families and our future depends.

There are more profiles available here; don’t miss a single one.

And join me in thanking these folks for the great job they do every day!