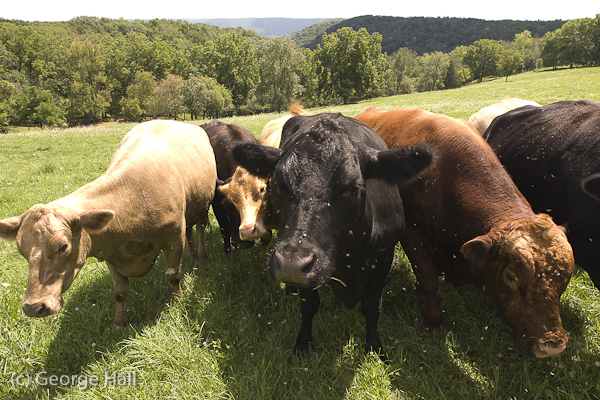 (Click here for a virtual tour of Richard Malinowski’s farm.)

As an active board member with two food cooperatives in Madison, Wisconsin, I have become interested in the whole foods supply chain. Attention has shifted to organic and whole foods in recent years so that sourcing is now a major concern, especially for naturally produced meat, poultry and dairy products. One item that stores are beginning to stock is grass-fed beef; however, both the authenticity and quality of this product along with its price need to be substantiated.

The benefits of pasturing cows so the animals get fed by grazing grasses and legumes as opposed to grain-feeding and the “crippling expense of annual cultivation and grain harvest” associated with confinement have been demonstrated. However, I wanted more information to identify local grass farmers, get acquainted with their operations, determine long-term viability, and see what sourcing agreements could be made with them.

The landscape around Madison is not the best grass country for cattle; it is too densely developed. The land is flatter and the soils not yet paved over have succumbed to more intensive annual cropping. Some form of livestock confinement, partial or total, is also becoming the rule.

Seeking pasture farming, I was led to the more marginal Mississippi Blufflands of southwest Wisconsin and southeastern Minnesota. There I discovered Richard Malinowski, the grass farmer who had originally introduced natural, grass-fed beef to the Peoples Food Cooperative in La Crosse Wisconsin. Richard resides near La Crescent Minnesota, which is situated just across the Mississippi River from La Crosse and about 3 hours’ drive from Madison. I made an appointment to discover everything I could about this independent, small, natural grass-fed operation.

Richard and Pat Malinowski’s farm presented me with the tangible environmental differences in outcomes that result from following rotational grazing practices in contrast to conventional beef farm operations. A carpet of grass in the barnyard – not the typical rag weed so abundant in the area – and the absence of odor, large farm equipment, and a much-less-than-full hay barn and grain bin, made me think at first that the farm had no cattle. A contented herd of 23 animals, totally unafraid of people, grazed just down the hill.

Situated on a high bluff overlooking the Mississippi, the 50-acre Malinowski farm is a mix of oak woods and open pasture. Currently the cattle are rotated among 5 paddocks spread across 20 acres; in past years as many as 50 cattle a year were finished here, with cows and calves housed at a second farm nearby.

The paddock in use had grass cover at least 6-8 inches high and an adjoining paddock was recently cut for hay – a result of a very wet southeastern Minnesota summer. The grass cover was largely comprised of timothy, brome, bluegrass, rye, clovers and trefoil; the only evident non-edible ground cover component was Queen Anne’s Lace.

By carefully managing grass height, any worm cycle is interrupted which means there is no need for antibiotics, no worming, and no vaccinations. In the heavy grass cover, there were no evident paths leading to the several watering stations.

All the limestone blufflands of southeastern Minnesota are highly erodible. Despite the steep slopes on Richard’s farm, no erosion runnels were present. On the other hand, with conservation practices on cultivated adjacent land, there was erosion. The contrast between his farm and the neighboring bluff-situated farms raising corn is telling. Nonetheless, cash grain cropping neighbors receive subsidies for conservation practices that Malinowski does not. It is interesting to note the lack of recognition in the US tax code for certain beneficial agricultural practices; it is just one issue that hampers the broader adoption of rotational grazing.

Richard purchased his farm more than two decades ago as a retired middle school science teacher. When he and Pat acquired it, they had to deal with erosion and poor ground cover remaining from the farm’s previous use as a horse and hobby farm.

The Malinowski’s started with 5 cows, intending to raise beef for their own use and to possibly sell beef to others. In the early 1990s, they established a connection with the Peoples Food Co-op in La Crosse, through a Co-op board member, at a time when many natural foods markets were primarily vegetarian.

To introduce potential customers to good quality, grass-fed beef, Richard set up a grill in the market’s parking lot and gave away samples of his meat. In the beginning, the store sold only a few pounds, but the natural meat caught on so that in a comparatively short time, they were selling 900 pounds – the equivalent of an adult animal – each week. As demand increased for Richard’s meat, he and Pat leased pasture on a second farm.

In our conversation, Richard told me that not many farmers in the area are practicing rotational grazing, as it requires a lot of hands-on involvement. “Setting out appropriate fencing, establishing a water system to serve all paddocks, and developing butchering and marketing resources and strategies are just a few of the hurdles to be surmounted,” he said.

Richard thought that one would have to go about 50 miles to find another beef operation similar to his. When I asked whether the Cooperative Extension (USDA, University of Minnesota, etc.) assisted him, he said they will make information available, but that he had to become a good student of rotational grazing, and learn everything from scratch, by relying on periodic conferences and written materials from such publications such as the Stockman Grass Farmer. Are institutions formally teaching the management practices that Richard learned to others? His answer: a blunt “No!”

That Richard Malinowski is a successful grass farmer, there is no question. But other factors have led Richard and Pat to contemplate retirement and begin to disengage from raising grass-fed beef. They are currently spending winters in Arizona. In Richard’s words, “It’s the Minnesota weather.”

Well, one can’t argue. Pasturing beef, for all of the nutritional value and ecological benefits, is not easy. It is a lot more than just fencing in a bunch of steers. And doing it Richard’s way means getting close to the animals; he even gives them names and they come when he calls.

But age is getting the upper hand with the onset of arthritis. And there is the problem of social isolation as farm culture changes and few remain connected within supportive farm communities or are sympathetic with more traditional practices. Many have left the land altogether and a lot of farmers that remain are “corporate.”

Then there are all the external challenges that include encroachment by subdivisions, inadequate protective zoning, penalizing rules, loss of meat processors, failing agreements, and a host of others including increased competition. Grass fed beef is entering the local market from locations as remote as Nebraska.

When asked how Richard saw his operation remaining sustainable over the long term, he named several key issues:

A multitude of factors come to play; and without a coherent support system in place, he believes that farmers will simply take the more certain conventional and centralized route.

The Malinowski grass-fed beef operation sits at the crossroad. Pat and Richard are not at all atypical of Midwestern grass farmers doing it a better way and producing a better product. However, they are caught between the forces of escalating land prices, suburban development, and totally industrialized “cash” operations. Richard is concerned that country life is becoming something for the idle rich, telecommunicating professionals, and factory farm workers.

Leaving the Malinowski’s traditional farmstead and facing a “gaggle” of new high-tech communications towers across the road at the end of their drive, I couldn’t help wondering if I was observing the culmination rather that the invention of a smart land use and better food idea. Like much in our society these days, the future of a sustainable pasture farming culture seems to rest with government policy.

About George Hall
After 25 years, George recently retired from the State of Wisconsin Department of Administration where he served as planner and managed a number of land use related activities. For six years George was the treasurer for the Regent Market Co-op (Madison WI), and continues to have an interest in food policy and its relationship to land use.