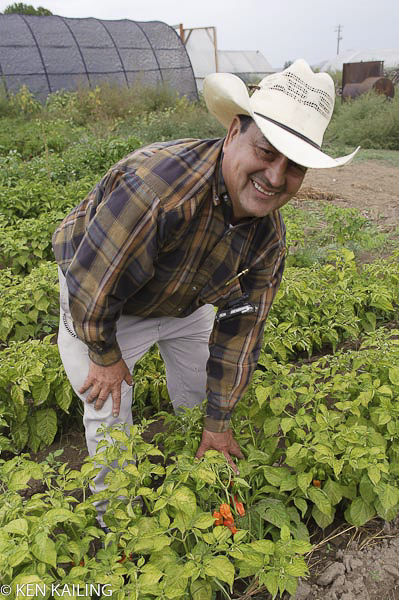 Minutes after meeting Hilario Alvarez in the packing sheds on his farm south of Yakima Washington, we were dashing after him down and across rows of peppers that were blazing with ripe fruit. Until you’ve stood knee-deep or, in some cases, waist-deep in dark green pepper plants, you have no idea how striking the colors of ripe peppers can be.

In the early 70s when he was a young man in his 20s, Hilario emigrated from Michoacán Mexico (west central Mexico) where 20% of the land area is farmed, to eastern Washington. He worked on farms owned by others, then rented land, and finally, in 1981, bought his own farm in Washington’s agriculture center – the Yakima Valley.

Patriarch and “Pepper Master,” Hilario Alvarez, his wife, his 9 children, their spouses and children, myriad cousins, aunts and uncles, and a small contingent of seasonal workers pick, pack, and sell more than 400 varieties of vegetables including 200+ varieties of peppers, 50+ varieties of tomatoes, 20+ varieties of eggplant, summer squash of every size and shape (13 kinds of zucchini), melons, and winter squash. The Alvarez family raises one more “southern” crop in the Washington sagebrush country – peanuts.

Alvarez Farms is famous in the Pacific Northwest for growing hundreds of varieties of sweet and hot peppers. From traditional sweet bell peppers in colors from yellow to purple to “Pumpkin Sweets” used to make those famous pickled peppers; from “Black Cayenne,” a finger-long, thin chili pepper that is almost velvety black to one unnamed variety that Hilario claims is the “hottest pepper in the world!”

(Click on the image to see the next one.)

Whether you want bell, cayenne, habanero, or jalapeno peppers, they all come from one genus (Capsicum), which consists of about 20 wild and 5 domesticated species. Cultivated pepper varieties are difficult to classify; there are so many, some are “transitory” and will disappear after just a few years, and new varieties are constantly created through natural hybridization and selection.

Chilies are some of the earliest domesticated plants in the Americas. Archeological evidence from Mexico shows that humans began using wild chilies for food as early as 8,000 BC. The pepper with the greatest variety of size, form and color is the Capsicum annuum, from which almost all the peppers you see in supermarkets and farmers markets come.

When Hilario and his growing family moved to Mabton WA to their own farm, he tried raising the “usual” assortment of vegetables and he faced a lot of competition when he sold them to distributors or at farmers markets. The “law of supply and demand” kept the prices he could charge down, and he was barely able to make enough money to support his family.

Rather than throw away the peppers he couldn’t sell, he converted the dried pepper wreaths he had seen in Mexico into fresh pepper “rings and strings.” The brightly colored wreaths and ropes became a hit at farmers markets, and now more than 70% of the revenue and a large share of the profits for Alvarez Farms comes from peppers.

Tiny “Blue Berry” peppers, no bigger than a navy blue or purple marble, cross with the long chilies and you’ll find one bush covered with stubby 1-inch long dark navy peppers next to one bearing long, slender 4-inch light blue fruit. The size, shape, and color of leaves and fruit change on each bush as you move down the row. Rarely do you see the purple chilies for sale in the markets; the darkest peppers are the prized color accents in the pepper wreaths and chains.

Tucked away in the riot of color, we found a handful of plants covered with “Chocolate Peppers,” which looked like they had been molded out of milk chocolate. These Hilario carefully picked and tucked into the pockets of his work pants to save the seeds for planting next year.

Niche Marketing at Its Best

“Product differentiation” is major strategy for many companies; it’s what makes your product different – and special – in the market place. Hilario struggled in the beginning when he offered the same kinds of vegetables that hundreds of other farmers around him were growing. It was when he began to specialize in peppers and unusual varieties of other vegetables, that Alvarez Farms began to sustain itself.

Intuitively choosing vegetables that few other farms offered, creating a “value-added product” that is a beautiful decoration, and willingly – and proudly – teaching others about the huge varieties of fruit and vegetables that grow on the farm; those are the strategies that have made Hilario and Alvarez Farms famous. And won them recognition as the 2009 Farm of the Year; awarded by the Tilth Producers of Washington, an organization that promotes ecologically sound, economically viable, and socially equitable farming practices in the State of Washington.

For more information about Alvarez Farms, visit their Facebook page.

Research on domesticated chilies from Mexico:

2 thoughts on “Pick a Peck of Purple Peppers”