By the time the first settlers reached the small spit of land that was ultimately to become part of Seattle Washington in 1850, the Olympia oyster population on the Pacific coast was already beginning to be over harvested. And in the early 1900s, poor water quality in Puget Sound threatened to finish it off.

More than a century later, Washington, Oregon, and Alaska have a significant hatchery-based oyster industry and are now the major producers of the Pacific oyster in the U.S. The non-native Pacific oyster, first imported in the early 20th century, is the most important commercial oyster species in the region.

Taylor Shellfish Farms, now managed by Bill and Paul Taylor, is part of a family history of growing and harvesting shellfish. In the 1880s J.Y. Waldrip, the Taylor’s great-grandfather settled in Puget Sound to farm Olympia oysters. 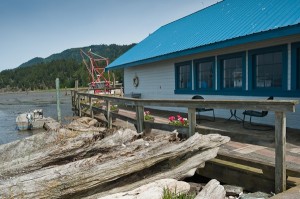 Today Taylor Shellfish Farms cover a total of 3 1/2 square miles of tide flats located primarily in Puget Sound including Samish Bay; one farm is on Willapa Bay in southwest Washington. The farms employ more than 400 employees to raise, harvest, and process a wide variety of shellfish, including Eastern, Pacific, Olympic and Kumamoto oysters, Manila clams, Mediterranean mussels and geoduck.

Shellfish, and oysters in particular, provide a necessary environmental service by filtering and cleaning the water in which they live. But because the water is filtered through the oyster’s body, any toxins or pollutants are taken into the meat and contaminated shellfish can make people sick. Closing the beds for several days gives the pollutants time to filter out of the animals’ bodies.

Heavy rain, agricultural runoff, and oil spills will all trigger closure of the beds. Daily testing of water quality monitors the beds and potential contamination is caught at the earliest possible moment thus preventing the sale of inedible oysters.

Run off from a pulp mill in the 1920s destroyed the oyster beds in Oakland Bay where the town of Shelton is located and home to several of the Taylor farms. At that point shellfish growers became actively involved in water quality and other environmental issues to protect their livelihood. To this day, they closely monitor the water and are on the front line when it comes to identifying pollution runoff. 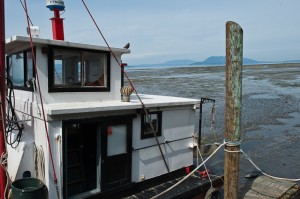 While oil spills remind the public that water quality is at risk, it’s the ongoing day-to-day drainage of fecal matter – animal and human waste – that is a bigger problem today. Called “nonpoint pollution” because it comes from many sources rather than identifiable “points,” pollutants come from farmland or storm water runoff, leaking septic tanks, and even pet waste.

In the 1990s a major effort focused on cleaning up Samish Bay and runoff problems were greatly reduced. Unfortunately the water coming down the Samish River continued to bring in pollutants.

In the past, state-level water quality testing was done on a schedule, not triggered by weather events, and in 2008 this “ambient” water testing overlapped with a period of rainstorms. It was then that the increased water flow brought in more fecal matter and tests identified it as a problem. The Washington Health Department began testing the water after every heavy rainfall and closed the shellfish beds more often.

Throughout 2009 and 2010, emergency closure of the beds happened frequently. This year more than 4000 acres in Samish Bay were reclassified and downgraded in order to bring about more careful management.

Samish Bay drains an area that is primarily rural, where many commercial farms have been broken up into 5-acre “farmettes.” Non-commercial livestock such as buffalo, alpaca, llamas, goats, horses, or a few cattle are often the animals of choice on small acreage. Unfortunately, the owners of these smaller holdings generally don’t have the farming and soil conservation skills needed to know how to manage animal waste and prevent runoff.

The water quality issues have highlighted these smaller holdings as a serious problem. While large dairy operations and livestock CAFOs – confined animal feeding operations (there is only one in the Samish watershed) – must operate under strict animal waste management regulations, these farmettes with a small number of animals more or less “fly under the radar.”

Bill Dewey, owner of a clam farm in Samish Bay and spokesperson for Taylor Shellfish Farms, says, “We hope that the problems in Samish Bay will draw attention to livestock management statewide.” The typical runoff in rural areas – leaking septic tanks, manure waste from livestock, dairy and small animal holdings, and wildlife – is causing a majority of the problems right now.