Here in the Pacific Northwest a clam called a geoduck – pronounced “gooey duck” – is the butt of many lewd comments because of its unusual shape. Actually, it’s just a case of outgrowing that way-too-small shell! Geoducks are the largest burrowing clam in the world and Washington shellfish growers have only been raising them since 1991.

Raising and harvesting geoduck is not a short-term proposition; geoduck can live to be close to 150 years old. It takes nearly five years before they weigh 1 1/2 to 2 pounds, a salable weight. And because they burrow underground and extend a neck that is 3 feet long to the surface, they must be harvested by hand. That harvest is hard work because it takes place as much as 70 feet below the water’s surface.

Harvesting shellfish underwater is hard, yes, but for those who are hoping to pocket a fistful of money, it also means no one is likely to be monitoring the collection. Now that geoduck meat is selling for about $150 a pound in China, there has been a rise in organized crime, poaching, and illegal export of geoduck in recent years.

So much so that the Washington Department of Fish and Wildlife calculates the slow recovery of stock after a recent harvest indicated that as much as 800,000 pounds of geoduck “appeared to be missing.” The missing meat is estimated to be worth at least $14 million.

State biologists and Fish and Wildlife officers are dealing with clever and organized thieves willing to risk capture for the buried treasure. 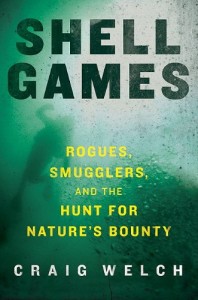 Pick up Shell Games: Rogues, Smugglers, and the Hunt for Nature’s Bounty by Craig Welch and learn what’s going on under the cover of deep water and night skies. Welch has been the Seattle Times environmental reporter since 2000 and he tells the story of environmental detectives who are trying to track down smugglers of the geoduck.

It’s a cops-and-robbers tale set in a double-crossing world where smugglers fight turf wars over these bizarre marine creatures. The geoduck is so valuable that it is traded for millions of dollars on the black market – in a world where outlaw scuba divers dodge cops while using souped-up boats, night-vision goggles, and weighted belts to pluck the clams from the sea floor. And the greatest dangers come from rival poachers who resort to arson and hit men to eliminate competition and stake their claim in the geoduck market.

Listen to an interview with Welch on PBS’ Living on Earth series:
Craig Welch and Shell Games

2 thoughts on “Geoduck – Hard to Say, but Big Business!”