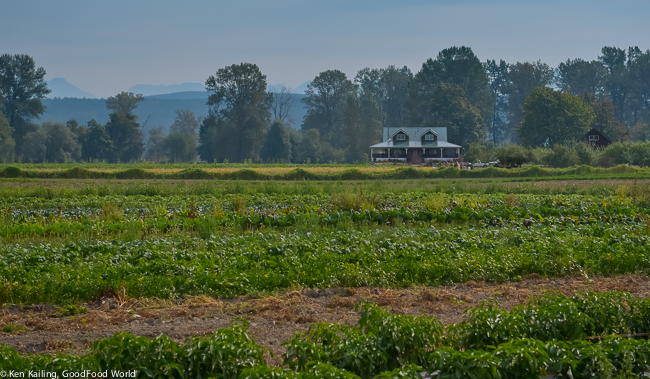 Seattle is just part of the Regional Food Policy Council, so the city and our mayor do not drive policy decisions, but strive to influence them.

At GoodFood World, we’ve reviewed the candidates’ answers and we have a few comments of our own.

Seattle proper packs 634,500 people into 142.5 square miles sandwiched between Puget Sound and Lake Washington. Any “urban agriculture” within the city must take place on very expensive land – or “spare space” in such public locations as parks, right of ways, and schools. Given that it takes an average of one acre to feed one person per year (based on potential production averaged across the US), only 91,200 of us would be able to eat if we leveled every building and roadway in the city limits. So what’s everybody else going to eat?

A city is fed by the surrounding “foodshed” and draws from larger and larger concentric circles, depending on the climate and growing conditions for a full range of foodstuffs. Yes, we can grow kale and spinach in our backyards, and tomatoes and peppers if you’ve got a good southern exposure without shade, but unless you have a greenhouse and a green thumb, you’re not likely to produce any citrus, bananas, or avocados.

Considering the size of the task of feeding 2/3 of a million people, even the most adventurous and creative city projects are token at best. Here is a quick list of projects that will allow residents to grow, process, sell, and distribute more food in Seattle, as outlined by Mayor McGinn in his commentary:

All well intentioned, but taken in total these projects will feed a very small number of people.

So what is our mayoral candidate going to do about it?

Murray tipped his hat toward the bureaucracy of the local and regional food community, but he addressed at least one area that could result in more local food making its way to city tables.

A key issue for both “urban” farmers and farmers like those in the Snoqualmie Valley and other surrounding areas is how to get food from the field to the table when they don’t have access to packing, processing, and distribution facilities.

In his commentary, Murray outlined steps to support local food production as a business, including the creation of an urban food hub that he describes as a district with concentrated food processing and treatment facilities, and storage and warehouse space with access to sufficient commercial transportation infrastructure.

From his description, I envision a light manufacturing area and a “terminal market” that makes it possible for small food processors producing everything from jam to cookies to packaged vegetables, and local farmer coops like the new Snoqualmie Valley Farmers Cooperative founded by Erick Haakenson, Jubilee Biodynamic Farm, and Matt Tregoning, Sol to Seed Farm, to reach new retail and food service customers in Seattle.

What SHOULD our mayor do about it?

Here are a few additional steps our next mayor can take:

Can any city feed itself? Hardly. Can the mayor of the City of Seattle truly change the food system? It’s not likely. But with real efforts focused on the business of local food production, we can certainly improve the quality and quantity of food for city residents, provide additional employment for immigrants and low-income residents, and support our local farmers.

Hungry City: How Food Shapes Our Lives, a book by Carolyn Steel

Can Western Washington Feed Itself?

One Acre Feeds a Person

On the Puget Sound Fishery