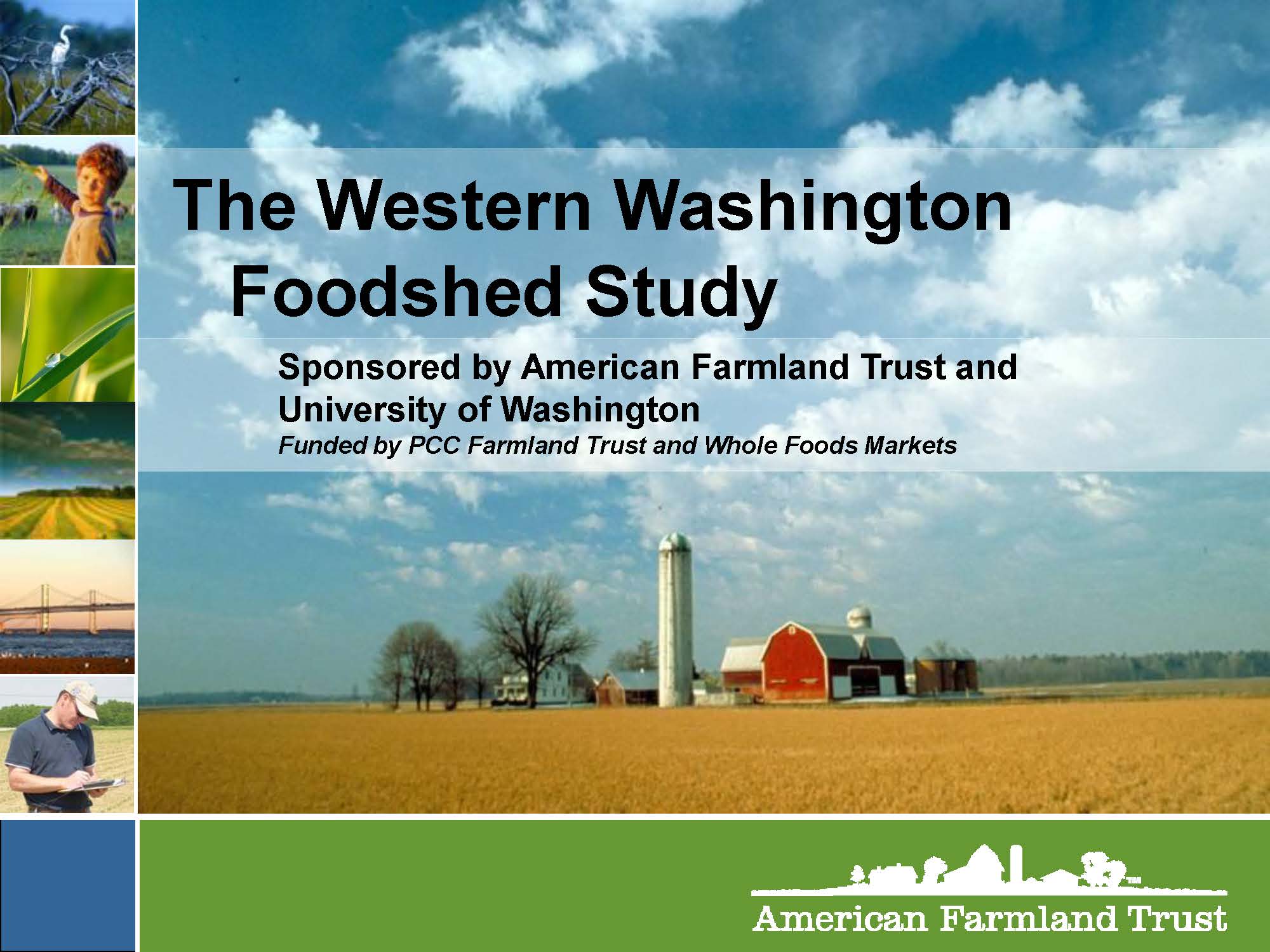 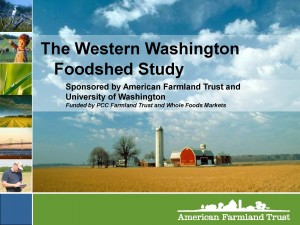 Sponsored by
American Farmland Trust and University of Washington

Studies providing real information about food production and consumption, especially incorporating local and regional data from the private sector, are increasingly important yet difficult to obtain. Those people involved in food policy and urban planning are hard pressed for both the funding and access to accurate data to prepare adequate studies. Nonetheless, an accurate view of the amount of perishable food that is produced or comes into a region and is being consumed or disposed is critical to the improvement of the food system. One of the people center to the interest of local food systems in Washington is Brandon Born, professor of Urban Planning at the University of Washington.

Born and Kara Martin of Urban Foodlink lead a team of graduate students to find out how much of the food the population of Western Washington consumes could actually be supplied within the region. Given optimum conditions, could the region feed itself? Published in late 2011, the Western Washington Foodshed Study (link) set out to determine regional food production, regional food consumption, and the potential of the region’s land resources to provide more than 5 million residents of the 19 western-most counties 1 with their daily food requirements.

According to the study, the region’s counties are home to 78% of the state’s population and that population currently consumes quantities somewhere between 1.5 and 3.1 times the amount of food produced. Why the wide variation? Primarily it is because a large amount of food is wasted: between 27% and 57% of food weight is lost between the farm and the table, depending on the food group.

Challenged by secondary data collected by widely disparate federal and state agencies, the group had to analyze aggregated data in various formats and which was not totally representative of the region. Data collected by government agencies tends not to be current; for example much of the information published in the USDA Census of Agriculture is dated 2007. Nevertheless, the researchers extrapolated results from these multiple sources to give grounding to the resulting insights.

While the intent of the study was to determine potential food production, some of the key observations found in the study also show that Washington residents apparently do not eat a nutritionally well-balanced diet:

Based on conversations with local retailers and distributors, researchers reported that there is a general opinion that more fresh produce and seafood is consumed in the Puget Sound region than indicated. Unfortunately the available data does not support those insights because seafood does not appear high enough on the USDA’s lists of protein sources to achieve visibility.

The Western Washington Foodshed Study is an informative study, however there are several concepts that have not been addressed (or acknowledged) in the final report. Perhaps because the primary study was undertaken by the UW Urban Planning Department, not the Business School, the research is focused on land use and resource planning and there is substantial depth of information regarding farmland currently and potentially available for food production.

The researchers do not appear to account for agribusiness drivers such as revenue and profit. Food producers – particularly large agricultural and food processing operations – grow for the market, not to provide food for a particular region. Their goal is profit, not nutrition, health, or taste.

Instead of dedicating research time to the amount of organic food produced and consumed in the study, more attention could have been paid to how markets influence consumer choice and how current subsidies and tax breaks distort production. It can be argued that the import of cheap, subsidized food blocks the creation of strong local food systems. At the same time both the culture and infrastructure of the traditional local food base, which was dependent on the fishery, has been lost.

Many of the stronger new food advocates, like Wendell Berry, Michael Pollan, and Bill McKibben, believe the infrastructure needs to be recreated and consumers need to be re-educated to make good food choices, not just to purchase cheap food. It is encouraging that consumer tastes have slowly begun to change with good food education and with direct access through farmers markets and community supported agriculture programs.

Missing entirely from the report was the recognition that one of the original protein sources in Puget Sound and along the western coast of Washington was seafood – both finfish and shellfish. Additional study of the impact of regional fisheries – both those in the Sound and “landings” through Western Washington ports – needs to focus on the value of seafood as a protein source.  Restoring the Puget Sound ecosystem – especially water quality – and the regional fisheries is as important as restoring regional agriculture.

In 2010, according to the National Marine Fisheries Service, about 189.5 million pounds of finfish, shellfish, and crustaceans came through Washington docks, ports, and fisherman’s terminals. It is interesting to note that almost 59 million pounds of that fish was Pacific Hake (Whiting). Hake is a very popular type of fish in Europe, but apparently does not appeal to American consumers – the dock price of Pacific Hake in 2010 was 7 cents per pound. Obviously hake (whiting) could be a very economical protein source.

GoodFood World applauds Professor Born for the work he and his team did on this report and encourage him to use future opportunities to look at the business drivers of food production as well as the environmental constraints such as soil, moisture, and temperature and land use policy.