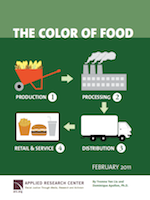 Food justice and farm worker wages have been in the news many times before. This fall the Coalition of Immokalee Workers (CIW) and the Florida Tomato Growers Exchange announced landmark agreement to extend Fair Food principles to over 90% of Florida tomato industry.

The agreement resulted from the One Penny More campaign that the CIW launched to get supermarkets to pay one penny per pound more for tomatoes to fund better wages for the tomato pickers.

While Whole Foods signed onto the program early in the campaign, Trader Joe’s has not been as open. A recent Grist article by Sean Sellers noted:

With the honorable exception of Whole Foods Market, however, the supermarket industry is refusing to do its part. While resistance is perhaps to be expected from grocery goliaths such as Kroger’s and Walmart, the indifference of Trader Joe’s – considered by some analysts to be one of the “world’s most ethical companies” – is quite baffling.

Field workers are not the only workers in the food supply chain that are suffering from poor wages and bad working conditions.

Just released by Applied Research Center is a new report that surveys the food system and maps out the race, gender and class of workers along the supply chain. The following is a brief excerpt from the introduction of The Color of Food. (Get your own copy of the report here.)

Food justice seeks to ensure that the benefits and risks of where, what and how food is grown, produced, transported, distributed, accessed and eaten are shared fairly. Food justice represents a transformation of the current food system, including but not limited to eliminating disparities and inequities.

Contemporary food production, like much of our economy, is dominated by large corporations, and these corporations produce edibles through an industrial process. The food chain is incorporated in the world capitalist system, where crops are grown in the global or domestic south, often in fields of monoculture crops, using bioengineered seeds and subjected to harsh pesticides; then the products are packaged and shipped to the end consumer.

What we see on the supermarket shelves or serve to eat is a food product, alienated from the natural and social world.

The good food movement narrowly focuses on the relationship between the producer and consumer, and to the environmental benefits of sustainable agriculture.

Consumers strive to directly relate to the process of food production, getting to know the conditions under which their eggs or vegetables were raised. They purchase food directly from the farmer or grow the crops themselves, shortening the time and space between when the food is first planted as a seed and when it is eaten by the consumer.

In the United States, more than 20 million people are workers in the food chain, over 11 million of which are full-time employees earning an income. Movements to make healthy food accessible to everyone are increasing in popularity, which is an important step towards achieving food equity for people of color. However, more attention must be paid to the often-invisible labor that produces and prepares the food that we put on the table.

People of color are often limited to low-wage jobs in the food industry, especially recent and undocumented immigrants who can easily find seasonal work harvesting crops in the fields. At least six out of every 10 farmworkers is an undocumented immigrant. Also, the food industry continues to grow even during economic recession, offering more job opportunities. The nation, as a whole, lost 1.9 percent of jobs between December 2007 and December 2008, yet the restaurant industry only contracted by 0.5 percent in the same time frame.

Often, workers in the food chain suffer low wages and exploitative conditions. Farm labor, for example, has a higher rate of toxic chemical injuries than workers in any other sector of the U.S. economy, with an estimated 300,000 farmworkers suffering from pesticide poisoning annually. Service workers in the restaurant industry, which serves food to consumers at the end of the chain, face unfair labor practices ranging from employers withholding wages to not getting paid for overtime.

Many sectors of the food chain are excluded from the protections of federal labor laws. This includes farmworkers, tipped minimum wage workers such as those in restaurants, and the formerly incarcerated. These workers fall under the rubric of excluded workers, who lack the right to organize without retaliation, because they are excluded from labor law protection or the laws are not enforced.

Food workers also suffer from lack of access to healthy food. Numerous studies document high rates of food insecurity, malnutrition and hunger among farmworkers. In California, a 2007 study found that 45 percent of surveyed agricultural workers were food insecure, and nearly half were on food stamps. A similar survey in North Carolina documented that over 63 percent of migrant and seasonal farmworkers were food insecure, with almost 35 percent experiencing hunger.

One thought on “Food Justice: The Color of Food”