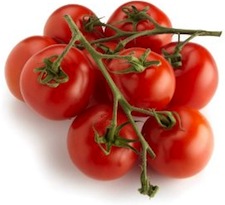 Just about two weeks ago, GoodFood World published 1¢ per Pound for Tomatoes? That’s What Farm Workers Get and we addressed how twenty-first century seasonal farm workers have a lot in common with 18th century industrial workers, in It Begins with an Apple – Broetje Orchards.

This week, the Coalition of Immokalee Workers (CIW) and the Florida Tomato Growers Exchange announced landmark agreement to extend Fair Food principles to over 90% of Florida tomato industry. Maybe we can finally leave the 18th century behind!

Following is the text of the CIW announcement.

Immokalee, FL – The Coalition of Immokalee Workers (CIW) and the Florida Tomato Growers Exchange (FTGE) have reached an agreement that will extend the CIW’s Fair Food principles – including a strict code of conduct, a cooperative complaint resolution system, a participatory health and safety program, and a worker-to-worker education process – to over 90% of the Florida tomato industry. 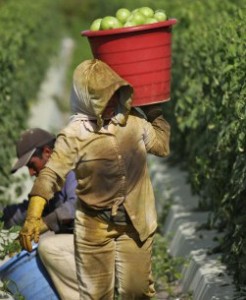 The collaboration will unfold in a two-step process. For this season (2010-2011), participating FTGE members (see the complete list at the end of this release) have agreed to pass through the penny-per-pound from participating purchasers and cooperate with a financial audit of the penny-per-pound funds. They have also adopted the Fair Food Code of Conduct, which will be fully implemented by the beginning of the 2011-2012 season.

Also during the current season, FTGE member growers Six L’s and Pacific Tomato Growers (who independently signed agreements with the CIW earlier this season) will join with the CIW in a Working Group charged with developing and evaluating the protocols and systems necessary to implement the Fair Food Code of Conduct. The Working Group will develop systems that can be applied on the industry level. During this first season, the code will be fully in effect, and monitored, only on farms that are part of the Working Group.

In the second step, beginning with the 2011-2012 season, the protocols and systems developed and tested during the first season by the Working Group will be shared with the other member farms, and the Code of Conduct will become fully effective on all participating farms.

The participating farms issued the following statement on the agreement through the FTGE:

“Our industry is and always has been strongly committed to supporting real, long-term and comprehensive solutions that improve the lives of all farm workers and their families. That’s why we’ve agreed to work with the CIW in establishing new standards of verifiable social accountability for the tomato industry as a whole.

We realize that this is a work in progress and this partnership will get stronger over time. It will not be completed overnight. As we move forward, we can be certain that labor complaints will continue to arise in the foreseeable future, but it is how we deal with these complaints in this new partnership that will serve to demonstrate that we are serious and that our approach is working.

As time goes by, we are confident that we will be able to weed out the bad actors and, working together, build a stronger, more sustainable industry that will be better equipped than ever to thrive in an increasingly competitive market place.”

The breakthrough agreement comes after fifteen years of often contentious relations between the CIW and the growers’ association. It also comes in the wake of bilateral Fair Food agreements announced last month with tomato industry leaders Pacific Tomato Growers and Six L’s.

“This is a watershed moment in the history of Florida agriculture,” said Lucas Benitez of the CIW. “With this agreement, the Florida tomato industry – workers and growers alike – is coming together in partnership to turn the page on the conflict and stagnation of the past and instead forge a new and stronger industry.”

“Make no mistake, there is still much to be done,” continued Benitez. “This is the beginning, not the end, of a very long journey. But with this agreement, the pieces are now in place for us to get to work on making the Florida tomato industry a model of social accountability for the 21st century.”

“Nearly 50 years to the day since Edward R. Murrow shocked the nation with his landmark report Harvest of Shame – which aired the day after Thanksgiving, 1960 – a solution has appeared on the horizon through the Campaign for Fair Food,” added Gerardo Reyes, also of the CIW.

“For this new model to achieve its full potential, however, retail food industry leaders must also step up and support the higher standards,” concluded Reyes. “Key players in the fast-food and foodservice industries have already committed their support. It is time now for supermarket industry leaders to seize this historic opportunity and help make the promise of fresh – and fair – tomatoes from Florida a reality.”

About the Florida Tomato Growers Exchange: The Florida Tomato Growers Exchange is an Agricultural Cooperative established under Chapter 618, Florida Statutes, providing its grower members with “limited” antitrust protection in accordance with the Capper-Volstead Act of 1922 for marketing agricultural products and other activities under the statute. FTGE member growers participating in this announcement:

About the Coalition of Immokalee Workers: The CIW (www.ciw-online.org) is a community-based farmworker organization headquartered in Immokalee, Florida, with over 4,000 members. The CIW seeks modern working conditions for farmworkers and promotes their fair treatment in accordance with national and international human rights standards. The CIW’s Campaign for Fair Food has won unprecedented support for fundamental farm labor reforms from retail food industry leaders. The Campaign for Fair Food taps the unique powers of all the elements of our country’s food industry: