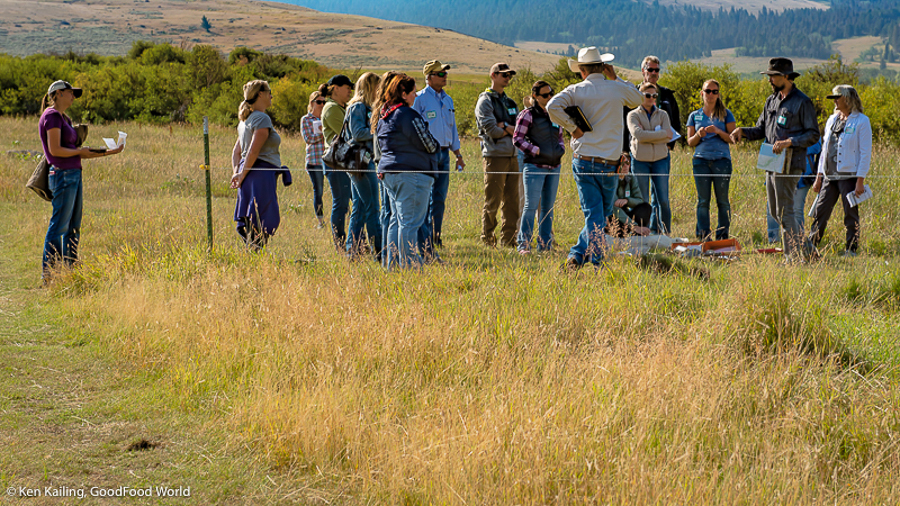 (Take a virtual tour of the Anderson Ranch here. Click on any image to launch the slide show.)

Montana is rightfully called Big Sky Country, and it’s not unusual to drive 3 or 4 hours to attend a meeting, visit friends, or join a field day to learn about ranching or farming. On a hot and smoky day in August, Anderson Ranch in the Tom Miner Basin, near Yellowstone National Park, hosted several dozen folks who came to learn more about resilient ranching.

The Resilience and Today’s Ranch Field Day was sponsored by the Western Sustainability Exchange and the Tom Miner Basin Association, two organizations that work with ranchers and land owners, and local, state, and federal agencies to conserve Montana’s open space, farming and ranching heritage, and wildlife habitat, and strengthen rural economies.

Dr. Tony Hartshorn, MSU professor in Land Resources and Environmental Sciences, is not afraid to get his hands (and feet, knees, and other parts of his body) dirty. He is an enthusiastic teacher who firmly believes we need to “get down in the dirt” to understand the soil and love it.

There are “foodies” who believe that cattle are evil on four hooves when it comes to the environment. And yet carbon sequestration – or the capture and storage of atmospheric carbon – can be a positive result of raising cattle on grasslands. By measuring the amount of carbon in the soil, Tony can tell if the soil is healthy and that reflects grazing patterns, the number of animals on the land, and plant diversity.

With a portable oven capable of reaching 800 degrees, Tony and his graduate students burned off all organic matter and moisture in soil samples. The end result: carbon and minerals are all that is left. Tony took soil samples from various parts of a pasture to compare the amount of carbon in each. Not only was it clear that the amount of carbon varied from sample to sample, but the color of the sample varied as well, indicating various minerals in the soil.

Whit Hibbard, rancher, range manager, and publisher/editor of Stockmanship Journal, contrasted low-stress livestock handling methods that make it possible to humanely and effectively manage thousands of animals using just a few handlers with conventional livestock handling, which is human-centered, behaviorally-incorrect, physically-oriented and can require dozens of handlers on horseback or ATVs, and dogs and prods to move the same number of cattle.

“The way conventional cowboys handle their stock results in hard-to-handle animals that are difficult to drive, don’t stay mothered up, don’t want to remain in a herd, won’t stay where they are put, walk the fence or hang on the gate wanting to come home, quit the bunch, hang in the bottoms and riparian areas, are hard to gather and drive, and don’t utilize pastures or perform as well as they should.”[1]

Implementing low-stress livestock management techniques makes it possible to effectively manage rangelands, protect streams and water quality, reduce overgrazing, and encourage plant diversity and soil health. In effect, getting the animals to do what you want them to do, by showing them how to get what they want with minimal stress.

Hibbard is the opposite of the cowboy of movie westerns; he is quiet, soft spoken, and moves deliberately and with intent. He opened his presentation with a video showing 10 or 12 horsemen trying to move cattle into a pen and load them onto a truck. It was noisy, violent, and high-stress, and clearly took a toll on both the animals and the stockmen. A second video showed cattle slowly following each other into chutes and pens with only a single handler behind them. The cattle were calm, and the handler could even lean on a fence waiting for them all to come into the pen. No shouting cowboys, no bellowing cattle, no lunging horses, no dust, no stress…

Managing cattle so that they want to do the right thing – stay out of streams, graze where placed, herd together for safety – makes it possible to implement strategic and rotational grazing methods for range management.

Dr. Dan Tyers, Grizzly Bear Coordinator for the US Forest Service Greater Yellowstone Ecosystem and affiliate faculty at MSU, Bozeman, described a study of grizzly confrontations and depredation in grazing allotments near the western edge of Yellowstone National Park.

Tyers noted that he started studying grizzly bears more than 40 years ago when the Yellowstone grizzlies were first added to the endangered species list, and now is approaching retirement when the population has grown enough for federal protection to be removed. Study of these bears has spanned his whole career.

In the Tom Miner Basin, home to Anderson Ranch, there is a resident wolf pack of 12 and more than 20 grizzly bears. Tyers discussed carcass management, i.e., not dumping dead livestock in a single pit. Yellowstone grizzlies are radio tagged and by mapping their travel it was obvious that the bears left the park to eat at a carcass pit, and then immediately returned to the park. In other parts of the Basin they forage in more normal patterns. Now carcasses are usually left where they are found.

The study results raised questions from the audience: why had the number of encounters increased or decreased in different areas, does the number of animals in a herd influence predator behavior, are scattered herds or gathered herds at higher risk? Changing climate, land use, and ranching practices all influence livestock predation.

Range riders or herders protected Montana’s livestock for more than a century before disappearing in the early half of the 20th century. Armed with rifles and mounted on horseback, these riders protected relatively small herds of cattle or flocks of sheep from predators. As times changed, and ranchers started to turn large numbers of livestock out onto summer pastures with little supervision, the riders faded into legend.

The Tom Miner Basin Association, in conjunction with the Western Sustainability Exchange, and the Natural Resources Defense Council, is bringing back the old strategy to improve range and riparian health, protect habitat, increase drought resilience, and sequester carbon by combining grazing management and stockmanship with knowledge of local carnivores to prevent conflict.

As a human presence with the livestock, riders offer an additional deterrent to predators. They also treat or remove sick and injured animals that they find and document carcasses to determine the cause of death, remove the carcasses or move the livestock, and concentrate cattle to make grazing and range management more effective.

While traditionally range riders – “cowboys” of old – were men, many of the range riders in the TMBA program are women. Rising early, riding during dawn and dusk – the prime predator movement time – tracking herds, predators, and carcasses, and managing and moving livestock, are all work both men and women can do equally effectively.

Bringing Together Livestock and Wildlife Managers

Traditionally ranchers and wildlife managers stood on opposite sides of an ideological fence. Their interests and concerns were different and it was hard to get them to “sit down and have a beer.” Wildlife groups viewed livestock as displacing native wildlife like elk, spreading disease, and destroying riparian areas. Ranchers were ready – and willing – to shoot wolves and bears that they saw decimating their herds and flocks.

It is good to see groups like Western Sustainability Exchange bringing both interests to the table. There are detractors and yet progress is being made by good people trying to get beyond their differences to balance the need for both working landscape and wild landscape.

Not only did they come together on the Anderson Ranch, there was good conversation – and a few good beers – shared.

Of Montana’s nearly 60 million acres of farm and ranch land, about 2/3 is ranch land and under 30% is cropland. GoodFood World continues to dig deeper into both food systems – the production, processing, distribution, and sale of meat as well as crops, from grains to fruits and vegetables.

At one time, Montana provided nearly all the food its population required, most of which was locally consumed. It is now estimated that 10% or less of the food consumed in Montana is grown in Montana. To strengthen our own food security, we need to explore, understand, and support the Montana food systems.

Beef processing, distribution, and marketing in – and out of – Montana

Can produce growers survive – and thrive – in western Montana?

One thought on “The Resilient Ranch”