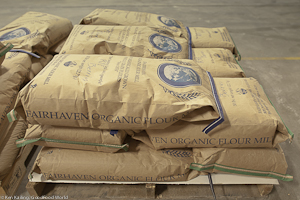 With all the talk of “gluten-free” and “low carb diets,” we seem to have lost track of the value of fresh-milled whole grain flour. The bleached white powder that most of us think of when discussing flour is so bereft of natural nutrients that they have to be added bake through “enrichment.” Fresh locally milled whole grain flour is a real joy to cook with and an especially nutritious ingredient for good health.

We’re lucky to have mill and skilled miller in Puget Sound who can provide us with whole grain flour “lively” enough to turn flour and water into sourdough starter in just a day or so. We’re also lucky he was checking Craig’s List at an especially opportune time!

The Palouse region in southeastern Washington was the greatest wheat-farming region in the world in the late 19th century. Because wheat will grow at most elevations, with minimum moisture, and can be harvested at different times of the year, mills were built wherever there was a source of waterpower. By the turn of the 20th century, the state of Washington was home to nearly 160 of them.

A century later, those mills had consolidated into 2 large commercial mills run by Archer Daniels Midland (ADM). There may be more hiding in the eastern part of the state, but I haven’t found them yet.

In 1974, a small flour mill opened in the village of Fairhaven, part of Bellingham Washington. Founded as a cooperative, Fairhaven Organic Flour Mill was owned and run by a handful of worker-shareholders. By the end of the 1980s only two remained. Bill Distler bought out his partner and ran the mill for nearly 20 years.

Kevin and Matsuko Christenson, living in Minnesota and wanting to raise their family in Washington, moved to Bellingham with the intent to start a family business.

After opening and selling one business, Kevin began to shop around for a new opportunity. Said Kevin, “We wanted something ‘green’ and a business our kids could identify with. While there were several convenience stores for sale, I wasn’t interested in making money selling cigarettes and liquor; we passed on those.”

Then one day, in June of 2007, Kevin was checking Craig’s List for bargains and came across this ad: “Fairhaven Organic Flour Mill for sale…” Kevin didn’t know a thing about flour or milling, but he was willing to learn and to work hard. After a short “internship” at the mill, he decided it was the business for him and the negotiations began. A short time later, Bill handed over the keys and Kevin became a miller.

In the fall of 2010, after more than 36 years in Bellingham, Fairhaven Organic Flour Mill moved to a 7,500 square foot space in Burlington, Washington, near I-5. The new facility gives the company room to grow;  today Kevin has four employees and runs a single shift, his plan is to be about 50% bigger in the next few years.

The mill buys grain and mills flour under its own label and offers custom milling services for growers with smaller amounts of grain. Kevin also mills flax and borage “tailings” into meal for several local companies that press flax and other Omega 3 oils.

The Fairhaven Organic Flour Mill is part of a local economy, where agreements are made with a handshake. “I’m not interested in making my money off speculating on grain; I want to have good long-term relationships with the farmers I buy from. Farmers whose word is their bond,” Kevin pointed out.

At least 60% of the grain Fairhaven mills is grown in Washington and 50% of the wheat is from Washington. That may soon change to 100% with an agreement with a new supplier. It isn’t likely that all the grain milled will be grown in Washington, rice doesn’t grow in the Pacific Northwest, most of it comes from California.

While organic flour brings a small premium in markets now, Kevin tries to keep the cost down so that his products are affordable for the average home cook or baker. The flour is milled to order and each bag sold is no more than a few days from milling.

Fairhaven is able to offer gluten-free products like buckwheat, brown rice, millet, and yellow and blue corn. These are historically gluten-free and soon will be processed on dedicated equipment. Until then, the mills and baggers are thoroughly cleaned before any  gluten-free grains are processed.

To grow the business and increase the percentage of locally grown grain, Kevin has several local farmers trying buckwheat to see if it is profitable to grow in Western Washington. Buckwheat is a cool weather, short season “pseudocereal” that is not related to wheat.

Fairhaven products are primarily sold through wholesalers and retailers in a region that stretches north into British Columbia, south into California, and east into Idaho. Customers can also buy 25 and 50 pound bags of flour directly from the mill. Fairhaven’s product list includes:

CORNMEAL – From whole yellow and blue corn, with the germ and bran included.

SPELT FLOUR – an ancient type of wheat with a nutty flavor. Can substitute for regular whole wheat flour.

2 thoughts on “How to Buy a Flour Mill: Check Craig’s List”