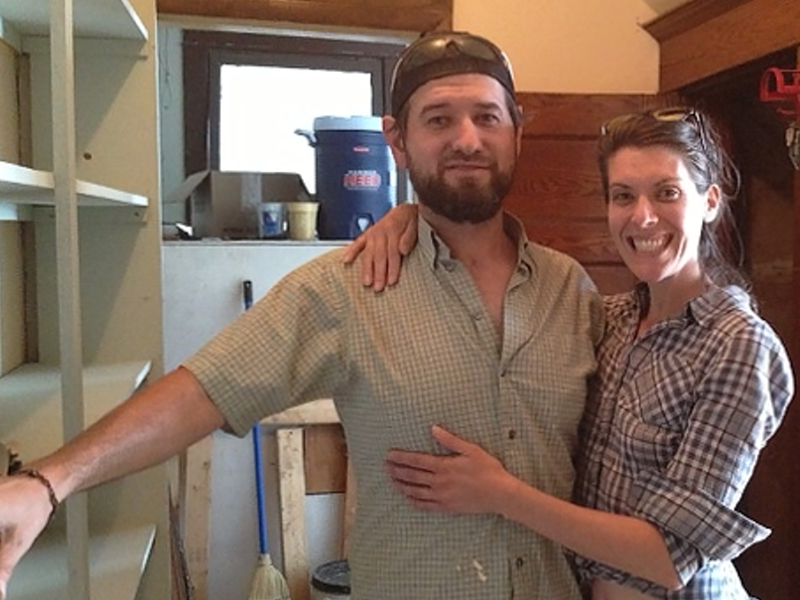 The men crowded around the kitchen table, helping themselves to thick slices of greasy meatloaf and weighing down paper plates with bright spoonfuls of macaroni and cheese. They were a lively group, laughing and joking about the events of the day. All of them making noises of approval at the food we’d laid out, expressing their love of meatloaf, teasing that they’d put on weight in the last two days and threatening never to leave. We stood by the counter waiting to refill drinks or supply napkins, smiling politely at their comments but thinking the food could not possibly be that good.

A big guy in a sweat suit dished himself some more casserole and turned to me, grinning. “This is some good home cookin’! Did you make this mac and cheese?”

“I’m not telling you the secret recipe!” I said, exchanging a glance with Jes. The “recipe” was listed on an empty Stouffer’s box in the trash. The macaroni had gone straight from freezer to oven to table and although I would have enjoyed making the same dish from scratch, I had no hand in crafting the meal or any of the meals we served that weekend.

It was April and I was filling in for the regular cook at a Christian retreat east of Cumberland. The job had been a disappointment from the minute I realized I would not be allowed to actually cook anything. It mostly entailed the reheating of frozen entrees, desserts readily packaged or baked from the box with canned frosting. I insisted on scrambling the eggs myself for breakfast, although it was suggested I order them frozen by the carton, pre-mixed. My friend Jes had accompanied me despite my assertion that we wouldn’t be cooking anything appetizing. It would be our first time cooking together, a worthwhile experience because Jes was opening a restaurant of her own and wanted me on board.

The so-called catering was just one of a handful of jobs I took on in the meantime. It could not be further from our vision of Jes’s restaurant kitchen, in which we’d make magic of raw ingredients, a full pantry at our disposal. The job had rendered our skills irrelevant. They’d enjoyed everything we served and even heaped praise upon us, but somehow it was hard to be glad.

I met Jes Clay when Ian and I came to Maryland, although we’d exchanged a few emails while I was still in Vermont. She was in the process of obtaining a building to turn into a farm-to-table restaurant, and wanted to source most of the food from our friends’ farm just twenty minutes away. Ian was starting an eight-month contract on said farm but I still needed a job. More importantly, I wanted to help. To witness the building of a restaurant from the ground up, the kind of place that would promote the kind of food I love. Bold, fresh food, free of mystery ingredients. Trucked in from the farm down the road and prepared with love daily, in small batches.

It’s exactly what Jes described in those early emails when she talked about her upcoming restaurant, SHIFT. The name is a nod to the mountain-biking community and her boyfriend Jason, an avid cyclist. But it also alludes to a change in attitude; a new way of eating that reflected values of sustainability, consciousness about our food choices and community involvement. The idea isn’t new; farm-to-table restaurants have been popping up in cities all around the country. Frostburg, Maryland just wasn’t one of them, until now.

Until next month that is. Opening date: October 25th.

The summer was spent renovating a building on Broadway; Jes finally held the keys after negotiating the sale all spring. Walls were torn down, carpet pulled and shelves removed, a dumpster filled with the detritus of what used to be a shabby liquor store with a wall-to-wall walk in cooler. She oversaw the installation of a new sprinkler system and dealt with roof repairs, drywall, windows, plumbing, rotting floorboards. I drove to town once a week to help out however I could. In an effort to prepare for the winter months, we made jam, pickled veggies, and canned tomatoes. We catered a few more events, spreading the word about the upcoming restaurant.

We even surveyed the competition. Jes took me on a tour of Frostburg’s eateries when we first arrived in Maryland. After a series of sad encounters – soggy carrot cake, limp lettuce, unadorned veggie burgers on Wonder Bread buns – it occurred to me that the bar might actually be set too low, that people might not want good food. Here is a town dominated by fast-food joints, pizza parlors and cheap diners. Half the community can’t wait for the restaurant to open. But will the other half be persuaded?

I try to imagine the men from the Christian retreat having a look at our menu. Will they turn around and walk out when they find out we don’t have Coke products? It’s possible, I’ve witnessed it before. Certain types will be turned off by the mere mention of kale or whole grains. I think about my uncles standing around the grill at our wedding, flipping cuts of grass-fed (and finished) beef. It was one of the few things we’d insisted on, and the cause of some contention. “Why would you let ’em eat grass when corn-fed beef tastes so much better?”

I don’t think much of preaching as a strategy for winning people over. After all, people should be free to choose what they want to eat. My preferred method? Make good food available. People will try it, and most of them will like it. Make food simple, make the methods transparent. People will be amazed. They’ll try it at home. They’ll come back for more. In this I have faith.

The morning after Jes and I made the greasy meatloaf, we got up early to make our own breakfast: leftover home-canned peaches baked with some homemade granola I’d brought from the farm. It was nothing special, but it aroused the interest of the groundskeeper who’d been hanging around all weekend in case we needed anything. He’d wanted nothing to do with food prep and was impressed that we pulled off what he considered a difficult job. He asked to try the crisp and Jes handed him a bowl.

“It’s good,” he said, and repeated what he’d said so many times that weekend; that cooking just wasn’t his thing.

So, cooking is not for everybody. Eating, on the other hand, is and that’s good enough for us.

Birth of a Restaurant

5 thoughts on “Cooking Is Not For Everybody, But Eating Is!”