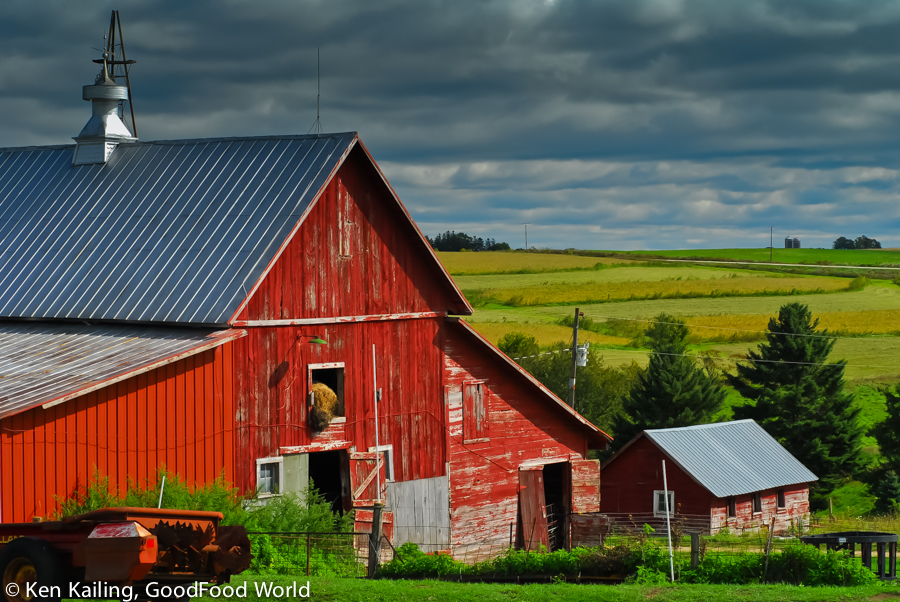 Since my cataract surgery at the end of 2007 went so well I had no concerns about the second surgery scheduled for early in the month.

It turned out however that the trip to the hospital at 6 AM in freezing rain was totally terrifying! Our windshield – as well as the rest of the truck – was covered with ½-inch think sheet of ice and the defroster could not make a dent in it, much less clear it.

We finally chipped and scraped a 10-inch hole in the ice to peer through and we drove on glare ice for 30 miles to La Crosse. Thankfully there was not much traffic.

Compared to the drive to the hospital, the surgery was a breeze! After I spent a short time in recovery, the drive home was much better as the roads had been sanded in the meantime; so driving was not so treacherous.

February: The sheep flock was getting smaller, as early in the month 21 ewes and lambs went to market. Most of these were older ewes that had lost most or all of their milking ability due to age or mastitis. If they could not feed at least one lamb, they had to go to market. Fairly often they would be purchased at a low price by a beginning producer, who was willing to feed bottle lambs in order to start a flock from high-producing stock.

With a smaller flock, shearing was much less stressful as was lambing a few weeks later. With a flock reduced to only 10 they still produced 22 lambs and they maintained their 200+% lambing average.

Near the end of April the ewes and lambs went to pasture and it was time to clean up the house yard and get the vegetable garden ready for planting. With fewer sheep to care for there was more time to spend gardening, and despite an overabundance of rain, by June things were pretty much under control. I took time to sit down and enjoy a beautiful day and write my observations of early June:

At last, two sunny days in a row in which to try and catch up on all the projects delayed by the seemingly endless spring storms in our area. After a morning and early afternoon of debris hauling, digging in flowerbeds and weeding, I was ready to start filling containers with flower plants grown from seed planted in the sunroom in March.

Amazingly most of them survived being over watered, under watered, and then – when finally set out on a picnic table to harden off – being buffeted by tornadic winds and drowned by one torrential rainstorm after another. Now the time had finally come to rescue them, however the hot weather I had been eagerly awaiting had arrived and by 4 PM I was hot, tired, and in need of a rest.

Seeing what I thought might be a bluebird near the house at the end of the border I grabbed my binoculars and sat down on a bench on the back patio to watch. Much to the chagrin of a pair of wrens that were preparing to nest in a small house near my seat, the jenny flew back and forth scolding angrily for a bit but I sat quietly. Soon first one then the other decided I was harmless and went back to their nest building. The female did most of the building, the male showed his support by singing merrily nearby with frequent fly-ins to check on the progress of the nest.

It was very hot and still but suddenly I felt a change in the air. The tops of the windbreak trees began to move and soon a hot breeze began to play about me as I sat enjoying all the rosy pinks, bright yellows, and soft blues of the late spring flower garden. As a small fleecy white cloud floated lazily into view from the west and drifted slowly eastward where I assume it was going to join a rather larger group of similar clouds – the kind that used to cause an old uncle to say, “The sheep are running to water,” whether that meant it was going to rain or not rain, I fail to remember. You’d think being a shepherd I would know that, but I don’t.

The orioles sang from the top of the mulberry tree, probably checking on the progress of the berry crop, which is very late this year, like most things are. Soon those berries will begin to ripen and the tree will be thronging with birds eagerly stuffing themselves with the juicy fruit.

The robins are the most voracious, a dozen or more in the tree at one time eating, at the same time attempting to chase away the other birds that come to feast, without much success, as the rose breasted grosbeaks, orioles, catbirds, bluebirds, cardinals, brown thrashers, indigo buntings, various finches, occasional wood peckers, and cedar waxwings just keep on coming.

The waxwings are the most fun to watch; they can sometimes be seen sitting in a row on a branch passing berries from one to another down the line.

At this time my pleasant interlude was interrupted by my Great Pyrenees Poohbah who came bounding around the corner delighted to see me but smelling gloriously of skunk.

I ended my narrative and escaped indoors until she found other interests to pursue!

Summer progressed into July and the gardens thrived, but my arthritic left hip was becoming more painful day by day. So gardening was not quite so pleasurable any more, nevertheless by August 7th I had my first BLT of the season with home grown tomatoes and lettuce.

I finally made an appointment to see the eye doctor in mid-August. I realized I had better get this done before I had to renew my driver’s license the following month. I had passed the eye test without glasses the previous year but doubted I could do so this year. Time marches on! I had my new eyeglasses in time to pass the eye test in September and get my license renewed.

We had a beautiful open fall up until late November when we were greeted one morning by a couple of inches of heavy wet snow. Later in the morning the sun broke through and I opened the sunroom shades. The huge barberry bush in front of the window was beautiful; its branches loaded with snow and its multitudinous crop of bright red berries peeking through.

December 1: The first day of bird feeding. I filled a large feeder with sunflower seeds and several smaller feeders with a blend of smaller seeds. It did not take long for chickadees to show up and they were followed by blue jays, juncos, cardinals, tree sparrows, and various other species. We were off to a delightful winter of feeding and enjoying the birds.

One thought on “Voices From the Farm: From Ice and Snow to Summer Delight”