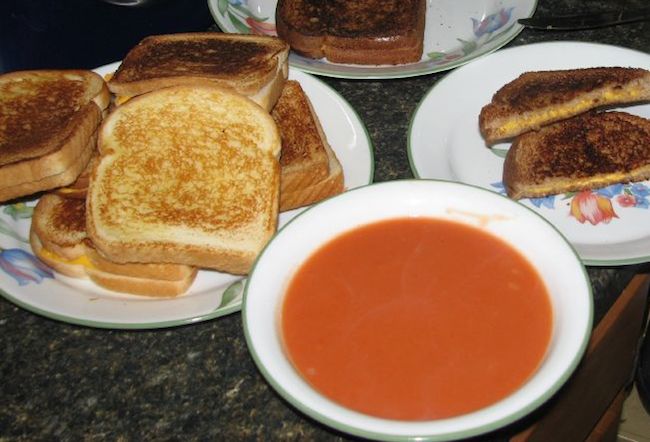 Children of the 1950s have a collective memory of the perfect comfort food: hot tomato soup and a gooey grilled cheese sandwich – a food treat that originated somewhere in those long-ago days when Campbell’s Soup and Wonderbread were in every pantry. And Kraft American Singles in every refrigerator.

On a cold and rainy day, mothers across the country today have many more options than those did so many decades ago. We take a close look at a full range of soups – from canned condensed to boxed to frozen to fresh homemade – to determine what exactly is in our soup. Is it as wholesome as we think (hope)?

What’s In My Soup?

Canned soup, boxed soup, soup produced in huge quantities in industrial conditions is by nature a “processed food.” And nutrients (vitamins, minerals, etc.), flavor, and aroma are destroyed by processing – the grinding, mashing, blending, and cooking. To replace what’s lost artificial flavors, colors, aromas, thickeners, texturizers, and preservatives – and man-made vitamins – are all added back in attempt to give processed food the taste and appearance of fresh food. Compare any canned or boxed soup to fresh soup or soup made in small quantities and frozen, and you’ll immediately see the difference.

Today food “manufacturers” have about 5000 additives they can add to their products, most of which have never been fully tested and many of which are “generally regarded as safe” (GRAS) by the FDA based on information provided to the agency only by the manufacturers. Here are just a few of the more common additives we found on the labels of the soups we selected:

(Thanks to Wikipedia for these definitions and descriptions.)

For our comparison we selected a total of 14 soups: 9 in cans, 3 in boxes, 1 sold in tubs from supermarket refrigerated cases, and 1 sold frozen at local farmers markets. We examined the ingredients in each one using a very simple measure – could you make this soup at home with the ingredients listed on the label? Then we categorized the products into three groups: 1 – Very Good, 2 – Pretty Good, 3 – Not So Good. Soup made with organic ingredients generally ranked higher than soup made with conventional ingredients and the inclusion of additives lowered the rank.

Very Good: Got Soup? (frozen, sold at local farmers markets), Amy’s Organic Soups (canned), Imagine (boxed), and Wolfgang Puck (canned) soups. None of these soups contained any ingredients that could not be found in the average home kitchen (though “evaporated cane sugar juice” seems like the long way to say “unprocessed cane sugar”).

Our top choice: Smoked Tomato Bisque from Got Soup?, a very small operation here in Seattle that buys ingredients from local farmers markets and sells soups at those same markets. The soups are made in small quantities, just like you would at home, and are frozen in quart containers. The chef, Jerry Baxter, informed us that he adds no salt to almost all of his soups, preferring to let his customers salt to taste.

Pretty Good: Safeway’s O Organic Tomato Basil Soup and Pacific Creamy Tomato Soup are acceptable choices; both are made with organic ingredients, and contain minimal additives. Pacific’s soup listed two liquids – reduced fat milk and filtered water – as the top ingredients by weight before listing tomato paste; the O Organic soup lists tomatoes and tomato pulp before the water. Heinz, a brand comparable to Campbell’s in name recognition, is an acceptable alternative because the soup contains few additives, however no organic ingredients are included. Heinz also uses vegetable oils that are likely to be corn or soy oil and modified cornflour.

Not So Good: The remaining soups – even those made with organic ingredients – contain a number of additives or “enrichments” and we consider them heavily processed. Two brands in this category warrant additional comment:

Muir Glen, once a highly respected organic label, was acquired by Cascadian Farm in 1998, and Cascadian Farm was bought by Kellogg in 1999. Muir Glen Tomato Basil soup  contains multiple additives (some of which are organic) – butter flavor, citric acid, calcium chloride, gum arabic, ascorbic acid – that push it into the “heavily processed” category in our opinion.

Earth’s Best Tomato Soup with Elmo Pasta, is made almost entirely with organic ingredients and no additives other than fortification with a vitamin/mineral blend – a blend that adds the illusion of “better for you.” Where do all those vitamins and minerals come from? Chemical firms, most often in China…

Chinese firms account for roughly half of all global vitamin production… though for some specific varieties it’s much higher than that. Half a dozen Chines companies, for instance, are making 90 percent of the vitamin C, or ascorbic acid, that goes into food both as a vitamin and a preservative. (Pandora’s Lunchbox, Melanie Warner, Scribner 2013, p. 81)

It’s your choice – you can rely on heavily processed, chemical-laden soups that are inexpensive because they are heavily processed, fortified, and enhanced with man-made additives; you can choose a product that is minimally processed with few additives; or you can make your own. However you make your selection, read the labels, know what’s in the can or box, and make informed choices for your family.

Making your own soup doesn’t need to be overwhelmingly time consuming – soup doesn’t have to be complicated – and you always know exactly what the ingredients are. Choose the freshest vegetables available (preferably organic) direct from the grower if possible, make quantities large enough to freeze a second batch, and share the experience with family and friends. Enjoy and create your own tradition of comfort food.