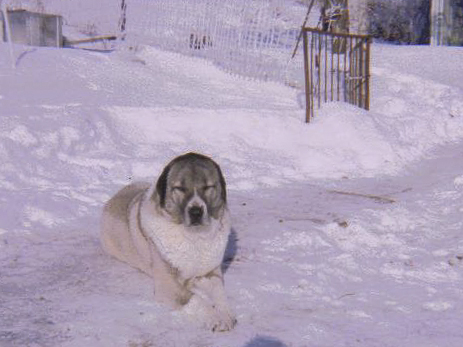 December: The little Alpaca, Red Rover, had been making such progress in his recovery from the attack of the meningeal parasite, that I became increasingly hopeful of his full recovery.

However, it became apparent that the parasites had caused severe damage to his spinal cord, and although he was looking good, he began having episodes when he would suddenly throw himself on the barn floor and thrash about wildly, obviously in pain.

As Christmas approached, I became anxious that Red Rover might crash during the holidays, and my vet might not be available if I needed to have the animal put down.  I phoned the vet about my concerns, and he assured me that he would be around.  This was a hard thought to face, since it was only two months since I had needed to have my dear old dog, Sheba, put to sleep due to her increasing disability. This is the hard part of loving animals!

I was also consulting with the Pipestone, MN, Veterinary Clinic as they were quite knowledgeable about the Camelids, but at that point I had pretty much exhausted all my avenues of treatment, and my best hope was to keep him eating well. 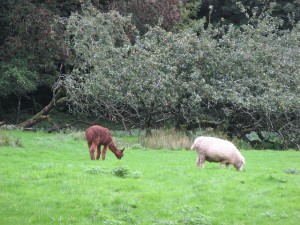 Gradually, however, he was eating less and less, and when he ceased defecating I knew he was in more trouble.  I talked to another vet familiar with the Camelids and he thought the alpacas digestive system might be impacted, and suggested giving the animal an enema.

I had no idea how I could administer an enema to the alpaca, and decided it was time to ask my local vet for help, as he would  likely have the equipment to do the job.  So I phoned and discussed this with my vet’s receptionist/assistant, and she said she would convey the message to the vet by phone.  Not much later the vet arrived.

Assuming he knew of the problem from his assistant, I asked if he needed some warm water, or anything else. This probably should have set off some alarm bells with him, but it did not, and he said, “No, this will be okay, I will give him a sedative first.”  This should have set off some alarm bells with me, but I thought it would make handling the animal much easier.  So he administered the sedative, and while we waited for the alpaca to go to sleep, we sat and talked about other things for a few minutes.

Then, he stood up, said “I guess it is time,” and pulled another syringe out of his shirt pocket, and administered another shot to Red Rover.  This was very puzzling, and I asked, “What was that for?”  The vet gave me a strange look and said, “That was the shot to put him down.”

Stunned, I said, “I didn’t want him put down! I wanted help to give him an enema!” Now, it was the vet’s turn to look stunned!  Apparently, there had been some miscommunication as to the purpose of the visit, and the vet had thought the call was in relation to the phone call I had made before Christmas, when I was afraid the animal might need to be put down and the vet not be available. The vet was as upset as I was, but at this point, it was too late!  We both felt horrible, but we had no recourse, as at that point Red Rover’s heart had stopped, and he was gone.

The year was ending on a sad note for me, as I had grown very fond of the little alpaca, with his big limpid eyes, gentle ways, and his attachment to the sheep. We will never know if we could have saved him, and I often wonder if, during the period when he was doing quite well, I had put him back on pasture with the sheep, he would have made it. I think he was very lonesome for them, and that could have been why he quit eating, but then again, maybe not.

A new year, and we were hoping for better things. I knew I should start the process of looking for new guardian animal for the sheep, but my heart was not in it.  A little time needed to pass, but I got back in the daily routines.

There was not a great deal to do in the way of barn chores except for feeding and watering the rams. The ewes were still on stockpiled Birdsfoot Trefoil pasture until about mid-January, and then Sean would be feeding them on round hay bales until shortly before shearing in February. However, it was time to look over the lambing supplies and see what needed to be ordered, line up a shearing date, etc. The long month of January was progressing.

Then, on January 24, my friend Dave Heiller, the editor of our county newspaper, died unexpectedly of a heart attack while attending the MN Newspaper Convention in Minneapolis. It was a shock to everyone! Dave was a neighbor and friend, as well as an editor. I was devastated, we had developed quite a close friendship over the past couple years. I could see his tremendous potential, his insight and humor, and wondered who, as someone at his Memorial Service put it, would “Fill the shoes of this gentle giant.”

I felt better after attending his Memorial Service. It was more a celebration of a life well lived in all its many facets, than a sad and somber affair. There was wonderful fiddle, banjo, and guitar music by friends who shared his love and enthusiasm for music, as well as well as singing of favorite songs. And accolades by fellow newspaper people, pastors, and many people whose lives he had touched along the way. Artifacts of his life were on display, his fiddle and banjo, fishing pole, hiking boots, and other items, as well as many photos of Dave with family and friends, writing awards he had received, and newspaper stories of the time when Dave, as a young man, was lost in Yellowstone National Park for two weeks during a terrible blizzard, and lived to tell the tale!

Dave’s physical presence was gone, but he left us the inspiration to live our lives to the fullest, and contribute whatever we could to the betterment of our communities, and the world in general. As one of the many lives he touched, I benefited from Dave’s mentoring. I had been a lifelong “scribbler,” and Dave wad always willing to read and critique my stories, and encourage me to keep writing.

Dave and I had been hatching an idea of putting together a book of short stories written by local people, and very recently Dave emailed me that he was getting motivated to do something about it, and would need a good editor, adding, to my delight, that he was thinking of a certain 80-year old sheep farmer he knew.  At that point, “My cup runneth over!” Sadly, that  was not to be, but I am still writing, and who knows?

Shearing Day had been set, but the shearer got the dates mixed up and consequently we would be shearing a little later than planned. Unfortunately, the weather was supposed to be even colder by then. It is such a shock to the ewes systems to lose their wool when it is so cold, but I kept the barn closed up, stopped as many drafts as I could, gave them extra feed, and told the shearer not to clip them too close. Shearing ahead of lambing does make it much better, because without all that wool on them, they are cleaner, abd the barn gets warmer as they put out more body heat. The barn also stays much dryer, as wool tends to pick up the moisture in the air and hold it, which then causes the barn to be damp. That is not a healthy environment for new lambs!

2 thoughts on “Voices From the Farm: One Step Forward, Two Steps Back”