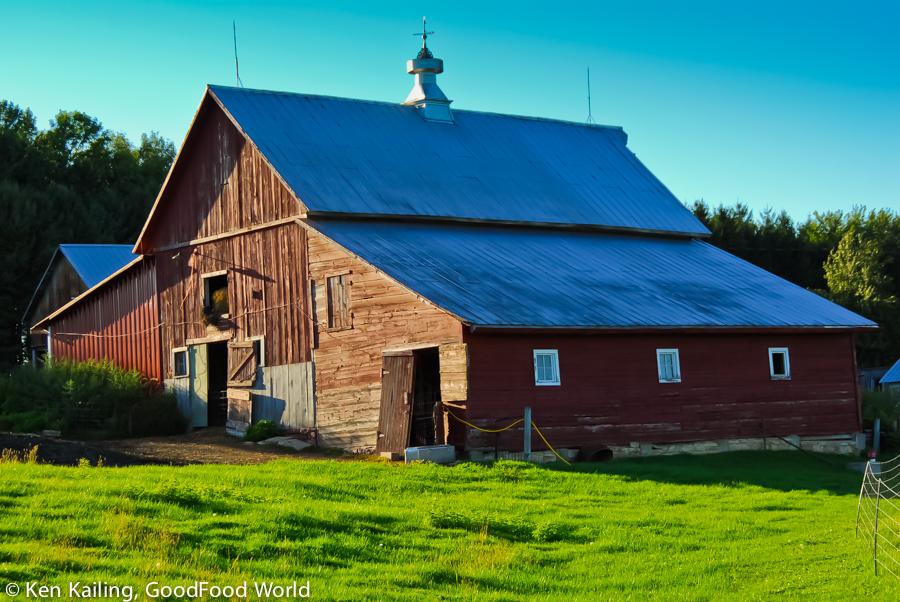 Although January is one of my least favorite months, this one was, one respect, less stressful than most months due to Sean putting out the hay bales for the sheep, llama, and horse. My barn chores were pretty much narrowed to filling the water tank, making sure the tank heater was working, and keeping the mineral feeder filled.

As if to fill the void left when Zhuzhie left us, early in the month a new Calico Kitten showed up in the barn. Tar Baby spent his nights in the barn and he and the new kitten, dubbed “Miss Kitty,” soon bonded. Their bonding was a somewhat puzzling affair; despite my protestations, he dragged her around by the scruff of the neck, and all the while she purred loudly and never laid a claw on him.

Of course, later in the month it was time for me to ferry Tar Baby to the Vet for his second series of shots, and next to ferry Miss Kitty there for shots and spaying. Sounds simple enough… except that transporting that half wild kitten, which was only used to the barn, to the house the night before the visit to the vet proved to be an exercise in avoiding being clawed to death! Not a happy cat at that point!

Once in the house, she disappeared into the far reaches of the basement. The next morning she was nowhere to be found, and we were due to be at the vet’s at 8:00 AM. To top it off, it was the coldest sub-zero morning of the winter and my truck wouldn’t start!

Ordinarily, this would not be a problem, as Sean would jump start it for me. However, Sean was not home. He had gone to the Cities the night before in order to be there early the following morning for his annual DOT Certification. And so it went!

After several explanatory calls to the vet about the delay, more cat searches, which were finally fruitful, getting her into the cat carrier (which we had the foresight to borrow from the vet), and giving the temperature time to rise a few degrees, I did at last get the truck started and the mission was accomplished.

A couple days later Miss Kitty was back home and doing fine, and she and Tar Baby enjoyed their time together again, sleeping on the sun room couch… that is, when he was not mauling her around. She still didn’t mind it at all and purred up a storm.

Next on the agenda was barn cleaning. Gone are the days when I accomplished it over the course of few days of hard labor with a pitch fork and wheelbarrow! These days it was done in short order by Sean and his wonderful skid loader! Then the barn was ready for the sheep to be brought in prior to the annual APHIS (Animal and Plant Health Inspection Service) inspection. 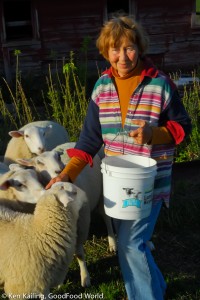 Since I had sold all my ewe lambs at the end of 2003 I could concentrate on my mature ewes and getting all their records updated for the inspection. It was my fourth year in the Voluntary Scrapie Program, and in one more year I would be a Certified Scrapie Free Flock, which should add value to my breeding stock.

At my last inspection, the APHIS veterinarian, after learning that I had not purchased any ewes since 1965, declared that I would be the poster child for the Scrapie Certification Program! I wondered if they would let me do commercials like all the other icons… I could endorse ram harnesses, ear tags, tattoo outfits, drench guns, dewormers, lamb nipples, and all sorts of glamorous stuff!

The APHIS vet arrived for the flock inspection, and after reviewing all the records, checking them against each ewes ID, declared everything was “kosher.” Thankfully, the program had come up with a tamper proof ear tag, and although it meant ear tagging each sheep, it was a big improvement over ear tattoos. They had served their purpose, but with time the tattoos spread out and faded, so reading them became a real chore. The new tags were a welcome change.

Shearing took place in mid-February, and from then on it was full-time ewe feeding of hay and small amounts of grain twice daily. As the time for the first lambing grew closer, the grain ration was gradually increased to meet the demands placed on the ewe by the developing fetuses.

My barn chores have gotten progressively easier with Sean feeding the hay bales in the interim between the end of pasture season and the beginning of barn feeding. Another work saver had been installed: a large grain bin on the north side of the barn. Grain could be augured from the large bin into the smaller feed bin in the barn by simply plugging in an extension cord. No more carrying in heavy grain buckets from a grain cart parked near the barn. I really appreciated that improvement as I grew older!

Lambing began in mid-March and proceeded until early April. By late April the ewes and lambs were moved to the rotational grazing paddocks, and another grazing year began! By May I was free of barn chores except for feeding and watering the rams, and was ready to start the gardening and lawn mowing season. 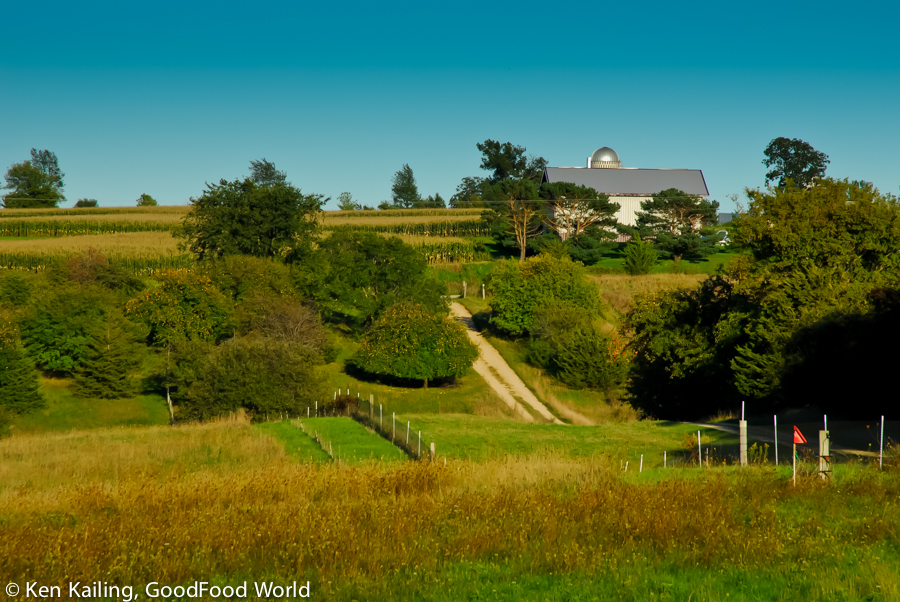 The yard and flower and veggie gardens kept me plenty busy, and by August I was ready for a break. It was time for another Family Reunion, so Sean drove Lisa, Chris, and I to Omaha, NE, in his new Dodge Ram.

We enjoyed a great 3-day reunion hosted by the Vernon Huffey branch of the family, lots of great food, visiting with members of our extended family, spending time at the Air and Space museum, which caused me to miss the famous Huffey Scrabble Tournament! Darn! I’ll get ’em next time!

Strangely, I have missed every Family Reunion Scrabble Tournament from the time they started in 1986 to the present due to one reason or another beyond my control. I did get to start a game at the reunion hosted by the Schultz Family in 1992, and drew as my opponent my niece, Sandy (Schultz) Vitrano, who is my all time favorite Scrabble opponent. We were both delighted that we were, by luck of the draw, getting to play each other!

We had barely started to play, when a long time friend of Sandy’s from India (where she had traveled extensively some years earlier), and who was traveling in the U.S., dropped in to visit with her. So of course we dropped out of the tournament.

We returned from Nebraska just in time to begin the canning and freezing season. My tomato patch nearly overwhelmed me, but many quarts of canned tomatoes, and tomato juice stocked the basement shelves, as well as tomato paste and spaghetti sauce for the freezer. There was also a bumper crop of green and red sweet peppers, hot peppers, cucumbers for pickles, squash, and much to my surprise, pumpkins!

I had never knowingly planted a pumpkin seed in my life – Buttercup Squash makes a great pumpkin pie – but apparently there was at least one pumpkin seed in my squash seed packet that year and, there they were, huge orange pumpkins! Whatever, I was all set for Halloween!

Sean added a new facet to his fencing systems and installed a 12,000-foot pasture watering system near Spring Grove. He also did some excavating work, pounded posts for feedlots and fences, repaired various trucks, tractors, and heavy use equipment. He also built a heavy use area at the entrance to one of our pastures and repaired a clean water diversion above the barnyard. The Bobcat on tracks is sure a handy piece of equipment! If he’s not using it himself he usually has it rented out to someone else.

Fall finally arrived, and as I was browsing through the fruit and veggie aisle at the grocery, I spied a small basket of pine cones with a sign: 10 Cents Each.

“Wow”, I thought, “I’m a millionaire! All those pine and spruce trees in the windbreak… maybe a big sign at the end of the driveway: Pine Cones! Pick Your Own, $1 a Peck, Cheaper by the Bushel!”

Well, enough daydreaming, the pears were falling off the trees and needed to be canned!

2 thoughts on “Voices From the Farm: Back to Reality”