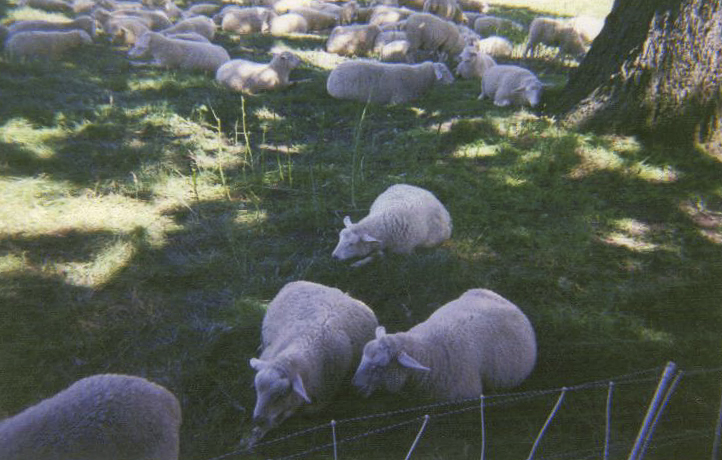 Late July: With the weaning completed, 40 feeder lambs were sold to Joe Austin. This, along with 10 other lambs sold earlier as bottle lambs or 4-H lambs, lightened my work load considerably. Presently, I was down to 57 ewe lambs and 10 ram lambs. Hopefully, some of these would be sold as breeding stock soon.

August: Jerry had recovered quite well from the light stroke he suffered in March. His speech and vision problems were gone, but he still had some short term memory lapses. Lisa had been a big morale booster, coming down from Rochester for a day nearly every week all summer, and taking her dad out to eat and shop in La Crosse or Rochester. They both liked to shop and look around, so they had a good time together, and it was a big plus to his recovery!

Late August: Sean still worked as head mechanic at Hot Line Freight, but he and Dave Tessmer, his best buddy since kindergarten, started a high-tensile fencing operation in their spare time during the summer, and it had been very successful. They had completed 6 or 7 jobs so far, and had all they could handle lined up for the fall season.

They had recently purchased a better tractor with hydrostatic drive, and a larger hydraulic post driver which would help speed up operations. So far, they have fenced for dairy and beef cattle, sheep, horses, and ostriches. Thy are both enjoying it, and it is fun to see them doing well.

September: The first part of the month was a whirlwind of activity! I was juggling freezer lamb sales, attending Sustainable Farming Association Board meetings, mowing the lawn, canning and freezing the abundance from the veggie garden and fruit orchard, visiting an aunt and celebrating her 88th birthday, mowing the lawn (again), going on farm tours and field days, for which I’m the designated photographer (me, who is the one who always forget to bring a camera!), answering requests for info on grazing, high-tensile fencing, sheep, etc., mowing lawn (yes, again!}, moving fences daily for 2 groups of rotationally grazing sheep, and so on, into infinity!

Late September: Thankfully, by the 3rd week of the month, things were slowing down a bit, so on the 24th, a Saturday, Sean and I made a trip to Amherst, WI, to visit the sheep farm of Gary Onan. We were in hopes of finding just the right Texel ram lamb for ourselves, and also one for a friend.

The Texel was a terminal sire breed imported from the Netherlands in 1985. They were quarantined at the USDA Meat Animal Research Center in Clay Center, NE, until 1990, when the first ones were released for sale. I had been keeping a close watch on these proceedings, as I wanted to know who bought at that sale. Gary Onan purchased the highest priced ram at the sale, for $5,000. I looked up some articles on Gary in the sheep magazines, and found that he had a reputation as a good sheep breeder, and I decided that was where I would eventually get my Texel ram.

Now, 4 years later, it was time for me to bring a Texel ram into my flock as the 5th and final breed in my 5-way cross flock, which later became known as the “Hi-5’s,” due to the 5-way cross, and the flock’s consistently high lambing rate. We spent the greater part of the day looking over sheep, and finally settled on a 7/8 Texel ram lamb for our flock, and a 3/4 Texel yearling ram for our friend. Needless to say, these sheep were not as expensive as that first purebred Texel ram that Gary purchased! But they were both beauties and had good blood lines!

The Texels are known for having a very lean muscular carcass with very high cut-ability, which is what we want to produce! And finally, we might be rewarded in the marketplace. For years the lamb packers had wanted fat lambs since they were selling the whole carcass, fat and all to the breaker by weight, naturally they made money on fat! It was a long hard struggle to overcome this way of doing business, but finally the rules were changed, and packers had to remove the pelvic and kidney fat from the carcass before sale, and a grade and yield system was put in place. Progress! Demand for lamb increased, and no doubt at least part of the increase was due to improved product to consumers.

October: Late in the month, when the ewe lambs had been bred, Joan was planning, as per our agreement, to pick up her bred ewe lambs. However, it just so happened that shortly before this, I had tuned into a weekly PBS radio program which featured a small animal veterinarian who answered questions on pets posed by animal owners who called in with problems. The caller on that day owned two cats which had always gotten along very well. Inexplicably, they suddenly developed an intense hatred of each other, which became violent! The caller was very upset, and looked for help to solve the problem.

The veterinarian launched into a long narrative of what the owner must do to reconcile these cats. First the owner had to separate them and put them in separate rooms, where they could not see or hear each other for quite some time, two weeks, I believe. Then she was to bring one cat out to a neutral area, walk it around there for some time, and then return it to its room. Next, she would bring out the other cat to this neutral area, similarly walk it around for a time, then return it to its room.

She then had to repeat these maneuvers daily for a week or more, to get the cats used to each others scent. Finally, she could bring both cats to the neutral area, and hopefully they would accept each other… but, if not, she would need to repeat the process! As a cat owner, I fervently hoped I never had to deal with this problem!

So, one Saturday morning, Joan called to say she would come to pick up her ewe lambs. All the ewe lambs had been housed in the granary with a ram lamb during breeding. Joan’s ewes were very tame and used to being handled, so I took a halter and lead rope and went to the granary to bring them down to the barn where it would be easier to load them. I figured if I led one out the other would follow.

However, all the other ewe lambs became excited when I took the one out, apparently thinking I was going to let them out too, and they started racing around. I decided to let them settle down a bit before taking the other lamb out, and I led the first lamb down to the barn and put it in a pen.

Sean was home, and was working on some piece of machinery near the barn door. He saw Joan turning into our driveway, and alerted me to that fact. “Shoot!” I said, “I wanted to have both lambs moved to the barn when she came.”

But at that moment the fact that they were in different buildings hit me, and the cat story leaped into my mind! I quickly enlisted Sean’s aid in perpetrating the “best spur of the moment practical joke ever!”

Sean of course, knew the cat story, and I told him to tell her that he had some rather bad news, and that her sheep did not get along anymore, and then to just replay the cat story. I knew that I could never keep a straight face and pull this off, but Sean could!

Joan pulled up in her van, jumped out grinning and, after we exchanged greetings briefly, she asked, “Where are my sheep? I can hardly wait to see them!” Whereupon I proceeded to get very busy with something nearby, as Sean launched into the story of how the two lambs had developed this dislike for each other, and we had to separate them, so one was now kept tin the barn, and the other in the granary.

I sneaked a quick peek at Joan, and was gratified to see a look of complete and utter shock and disbelief on her face. And Sean, so serious, droned on about what she would have to do to counteract this problem. The lambs would have to be kept in separate buildings where they could not see or hear each other for about a month. Joan thought she saw a ray of hope at that point, as they had a huge pole barn, at least 80′ long, and she thought she could put one at each end of the building.

But, “No,” Sean said, and stressed that they must not be able to see or hear each other, and would have to be kept in separate buildings for quite some time, and he then went on to explain bringing one into a neutral area, walking it around for a time, then putting it back in its building, and next bringing the other lamb to the neutral area, walking it around… etc,etc. I sneaked another peek, and Joan’s facial expression by now was priceless!

I had to get very busy again, and keep my back turned as I was shaking with laughter to the point of strangulation. Sean droned on and on, patiently knocking down every possibility Joan came up with! I finally had all I could stand, and burst out laughing. Joan stared at us both unbelieving, then realizing she had been the victim of a hoax, said, “You rotten guys! You know I don’t know anything about farming!”

Well, we got the other lamb out of the granary, loaded them both into her van, and Joan and her two bred ewe lambs went happily home. She told her hubby, Howard, about our wicked trick, whereupon he called us to congratulate us on such a brilliant hoax. Very gratifying!

2 thoughts on “Voices From the Farm: The Practical Jokers Succeed!”