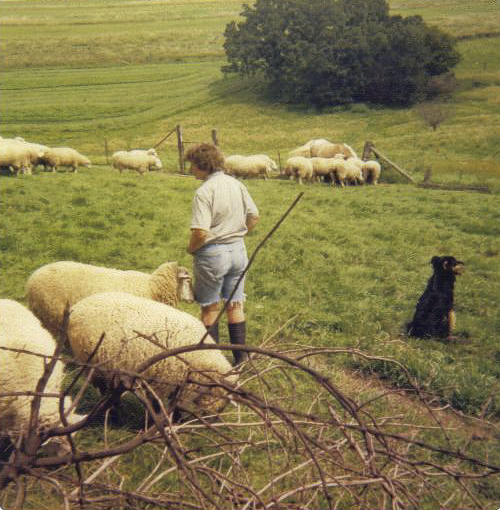 May: After the chaotic lambing season was over, and the sheep flock was out on pasture, I managed to pull myself together, get my veggie garden in, and pay some attention to my house…which badly needed it! Of course, there were still fences to be moved, and bottle lambs that needed feeding, but life was settling down into its usual routines.

June: Already the year was looking to be very busy! The Land Stewardship Project on accessing credit for beginning farmers and others, was ongoing. We were meeting weekly with the officers of the area Merchants Banks. Progress was slow, and the meetings were at times contentious, but the banks were at least at the table and involved, so we pressed on! 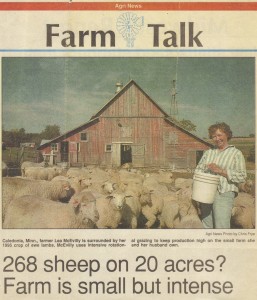 Sno Pac Foods was still renting our 9-acre organic field, but this would be the last year, as they were raising continuous peas. Peas are heavy feeders, and after harvest this year, it will be time to get the field back into a regular crop rotation. Next year, we would be renting all our cropland to Dave, Sean’s fencing partner, who was also a beginning farmer! He was already renting all our other cropland.

July: Our extended family held its huge 3-day reunion at my brother’s farm in nearby northeast Iowa. This event takes place every 3 years, in varying parts of the country, and is enthusiastically attended each time by 100 or more family members. Since the last two reunions have taken place in the Midwest, it was agreed that the next one will be hosted by the California family members.  It will likely be a week’s cruise from San Pedro, CA, down the Mexican Peninsula to Cabo San Lucas, and the return trip to San Pedro. Sounds like a fun reunion!

August: Chris Frye, the Managing Editor of Agri News, came down from Rochester and did a nice story on my sheep operation.  Of course, I seized the opportunity to sell him 5 of my older ewes, and he became a confirmed sheep farmer as a consequence! 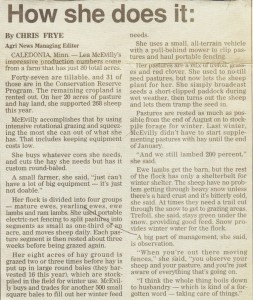 Jerry was having quite a lot of health problems. The stroke last year slowed him down considerably.  His vision was very bad, and he was nearly totally blind in one eye at this point. Lisa was very helpful, frequently coming down from Rochester, where she works, and taking her Dad for outings in La Crosse, WI, which he enjoyed very much!

September: Sean and Dave had a busy summer fencing, and still had many jobs lined up for fall. Sean would change jobs in another week, and move from his mechanic job in Onalaska, WI, to the Caledonia Haulers in Caledonia, MN. That shortened his commute from over 30 miles one way, to less than 3 miles. The Haulers also had a much better fleet of trucks, which they kept in top condition, and a much better shop to work in, so it was a big improvement for him!

I had been swamped by people coming to purchase breeding stock!  As a result my flock numbers had been cut by quite a bit so far, and people were still calling, so more would be coming!  Locker lamb sales were also under way.

October: Our doctor called, shortly after Jerry had been in for a check-up, and said his test results were about the worst they had ever seen… bad cholesterol over 300, the good, nearly non-existent, diabetes completely out of control, triglycerides way up… also an ulcer, gout, and of course, heart disease! The doctor thought a stroke or heart attack is almost inevitable.

Jerry was nearly 73, but when still in his twenties, he was sure he would not live beyond age 40, as his father died at age 41. I suppose, if it were not for medical advances, Jerry would very likely have died in 1974 when he had a massive heart attack at age 51. As a result of the attack, part of his heart muscle was dead and his endurance was greatly diminished from then on.

The cold weather was closing in, and the sun room  became a disorganized mess of hibiscus, lilies, geraniums, springerii, and other plants dug up at the last possible minute before they froze, and brought in to survive for another year.  The geraniums were huge, and had to be cut back, but by February they were setting blooms again! The sun room sure shortens the winter. No regrets about adding that to our house!

I had been hauling lambs to the locker for a couple weeks already, but had quite a lot left to haul as I had so many orders for lambs this year.

November: The first two weeks of the month I was still hauling lambs to the locker, a total of 18 lambs this year! By the time all the customers orders were ready and delivered, I was in need of a break! So, I left Sean in charge for a weekend and my sister, Merle, and I took the train to Milwaukee and spent a couple days with her daughter Sandy. We had a wonderful time, eating, going to movies, talking, playing endless games of Scrabble, and doing a little shopping, before heading home, ready to carry on again.

December: The sales of breeding stock had stayed strong all year, and the total sheep sold included, 65 ewe lambs, 9 yearling ewes, 12 two year old ewes, 5 mature ewes, 8 ram lambs, and a 3 year old ram. In spite of all these sales, we still had over 70 ewes a year or more of age, plus some ewe lambs.

Jerry’s eye problems worsened, and near the end of the month he had to undergo surgery for a detached retina, a very painful surgery. He was recovering and the eye healing, but he had developed a very bad cough. I had been trying to get him to go to the doctor, but to no avail.

Finally, at a visit to his eye surgeon, I got a chance to speak to the doctor alone, and asked him to urge Jerry to see a doctor about the cough. He did, and cautioned Jerry that the racking cough might cause damage to the healing retina, which it very well could, but I was also worried about lung cancer.

One thought on “Voices From the Farm: Fame Comes to the Farm”