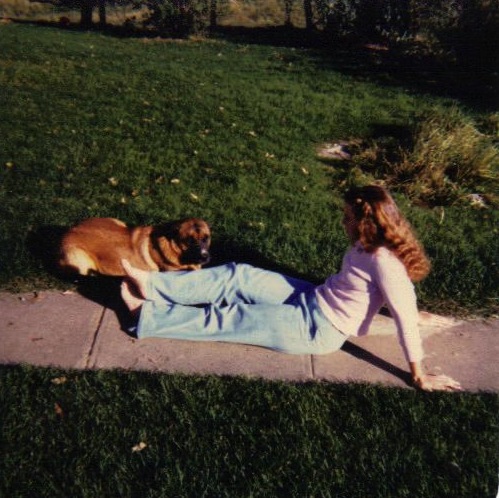 January: With the New Year, Sean started a job as a diesel mechanic for a freight outfit based in Onalaska, WI. For the past few months he had been working for a neighboring family that owned several farms, and had crops, dairy, beef cattle, and hogs. He had gained a lot of experience, which would be of value to him in the future, but for now he was glad to have full time employment and put his training to use again.

The experts were predicting that the sheep industry in this country would shrink by 15% to 20% this year. This was due to a number of reasons, among them packer concentration, low prices to producers, increased lamb imports, the Scrapie problem, etc.

Since we were on a low input, pasture oriented system, we were considerably better off than many producers, and would be able to survive. We had just brought our bred ewe flock in off stockpiled Birdsfoot trefoil pasture on New Years Day after 8 1/3 months of continuous grazing for the year. This cut our winter feed bill, which is one of the big expenses, down a great deal.

Also, I had developed my own markets for breeding sheep, locker lambs, tanned lamb pelts, summer sausage, and trefoil honey, so I was not as dependent on the regular lamb markets as most.

February: Danny Ryan came to do the annual sheep shearing. Since Sean was no longer available to “catch” for the shearer, I hired a young neighbor, Luke, to do that job. I had done it myself for many years, but now, into my late 60s, I was glad to surrender it to any willing soul.

In addition to catching the sheep and setting them up for the shearer, the job also included packing the shorn fleeces in the huge wool sack which was hung on a frame, and could hold up to 30 or so fleeces, after someone climbed in and tromped them down. I was never able to do that job, being of fairly short stature, I would have disappeared into the depths of the wool sack!

With Luke handling all this, I was free to take care of moving the shorn ewes to the lower barn where they could dink water and eat hay, as they were not fed before being sheared. Being set up on their rump with a belly full of lambs was uncomfortable enough, without the added bulk of a rumen full of hay to add to their discomfort.

I was also kept busy moving new ewe groups to the shearing pen. The last to be sheared were the ram, or rams, as the case might be, which always added a touch of excitement when they were let out of their pen. Rams are totally unpredictable! So it made for a busy day for all concerned, but it was a job well done, and it was a good feeling to have the ewes shorn a good month before lambing was due!

March: Lambing started in the middle of the month, so it would be over, and the youngest lambs a few days old, before they went out to start the grazing year. We usually let the flock graze in the orchard pasture first for a short period, where they could still have access to the barn if the weather was unsettled in early April, which it usually was!

This was our first year without Big Mumbo in the lambing flock; it just didn’t seem right! But Big Jumbo, was still here, and at age 11 had one more set of triplet ewe lambs. However, one half of her udder was ruined by mastitis, so she could only feed one lamb. I bottled one, and sold one to a young couple, and left Big Jumbo with one to feed. This would be her last year of lambing.

She and her twin, Big Mumbo, together had produced 65 lambs in their lifetimes. With the multiple births several lambs were lost, but those saved earned Big Mumbo a Lifetime Lambing Average of 325%, and Big Jumbo a 250% Lifetime Lambing Average. Thankfully, their genes were still well represented in our flock by their offspring retained over the years.

April: Hard on the heels of the lambing season came Bluff Country Lamb and Wool’s 2nd Annual Leg of Lamb Dinner. I had again contacted Bill Brennan at Iowa Lamb Corporation, and told him that we had some money now, so we could buy the lamb legs for this year’s dinner, but we still needed a break on the price! He gave us a substantial cut on the cost of the legs, and he again trucked them up to St. Ansgar Locker at no cost to us. Bless him! I think he approved of our efforts to introduce lamb to our area, so he was willing to help us out.

Sean and I, between us, sold our goal of 100 tickets, and other members sold the other 100, so we would have a full house attending the dinner!

I was preparing the home baked beans, and meat sauces again, and coordinating with the St. Ansgar Locker on the lamb, mashed potatoes and gravy. Other members were lining up the remaining components of the meal, making deserts, etc.

It was always a hectic time, as most of us were still lambing, or barely finished, so were very busy people, but it all came together for another successful and enjoyable dinner. We were making a lot of lamb eating converts, and also becoming a “quite well off” little sheep organization!

Mid-April: The ewes and lambs went to pasture, and it was a relief to have them out of the barn. Once they had grazed the orchard pasture they would then be rotating through the paddocks in the big front pasture, after that through the two strip trefoil pastures, the woods pasture, and the north pasture. This would take us through June, and it would be time to bring the flock in for weaning, separate the lambs from the ewes, treat the lambs for parasites, put the ewes on dry hay for a couple days to hopefully dry up their milk supply, and try your best to keep the two groups apart!

There is a lot of “baaing and bawling” going on for a couple days, and almost inevitably a couple of lambs will get back to their mothers despite your best efforts! I have heard of one solution to the problem, which was to load up all the ewes and take them to another farm out of hearing range for a few days. Barring that, you had better have secure pens, strong gates, a good charge on electric fences, etc.

July: The weaning was usually completed around the 4th of July, after that the ewes returned to the paddock system to begin the 2nd rotation. The lambs again grazed the orchard pasture from which they had access to the barn, and fresh water, a mineral feeder, and a small amount of grain daily.

Once the orchard had been grazed, they then went through the lane between the barn and the 9-acre ridge pasture where the trefoil had been stockpiled all spring. This was the same pasture where the ewes grazed stockpiled forage last fall until we brought them in on New Years Day. Once this system had been worked out and followed through, it worked very well year after year.

Birdsfoot trefoil is unique in that it will grow, bloom, set seed, and if not grazed or harvested, will repeat the process three times during the spring and summer, and it will remain palatable, as it has fine stems and small leaves. In the winter it will remain green under deep snow, and the ewes will paw through the snow to graze it. Another plus is that it is a non-bloating legume, and that is a real blessing to grazers!

Our old dog Brindy was still with us, but nearly 17 years old now and becoming very arthritic. This was probably her last year. She had been a faithful guardian for our flock all those years, and we could hardly stand the thought of losing her.

One memory was the game she played with the squirrel in the valley… this went on for several years. The squirrel would be on the south side of the valley, Brindy would be in the pasture at the top of the hill watching for the squirrel.

She would crouch down behind the gate so the squirrel could not see her, and when the squirrel started to cross to the north side of the valley where there was an rock outcropping and a grove of oak trees, also a hickory nut tree, Brindy would wait until the squirrel was exactly halfway across and she had the best chance of catching him (her).

Then she would leap over the fence and go racing down the hill in pursuit of the squirrel! It was always a hair raising escape for the squirrel who would manage a last minute leap to cling to a branch just out of Brindy’s reach, but the next day they would reenact the drama all over again. I think they must have both enjoyed it!

And of course, we would never forget the chicken dinner we didn’t get to eat. It was a weekend, I was in the kitchen preparing a chicken dinner with all the fixings. The rest of the family was in the living room engrossed in something on TV. Brindy was in the kitchen, lying quietly in her usual well behaved way. l had just finished putting the salad, veggies, mashed potatoes, and gravy on the table, then set the plate of fried chicken, (a whole chicken!) in the center of the table.

I took a few steps to the living room doorway to tell the family to come and eat, turned back to the table, and the chicken was gone! Every crumb! The plate was there, undisturbed! But no chicken!

I had not heard a sound, not even a crunch! Brindy had to have swallowed the pieces whole, bones and all. I had never fed my dogs chicken bones because of the danger they posed, but apparently swallowing the pieces whole, and not chewing up the bones, cancelled out the danger, as it didn’t cause her one bit of trouble! However, the rest of us had to do without our chicken!

That was the only Cardinal Sin we remember her committing, but apparently the temptation was just too great. We had to grudgingly forgive her… over time!

2 thoughts on “Voices From the Farm: Recalling a Chicken Dinner, Sans the Chicken”