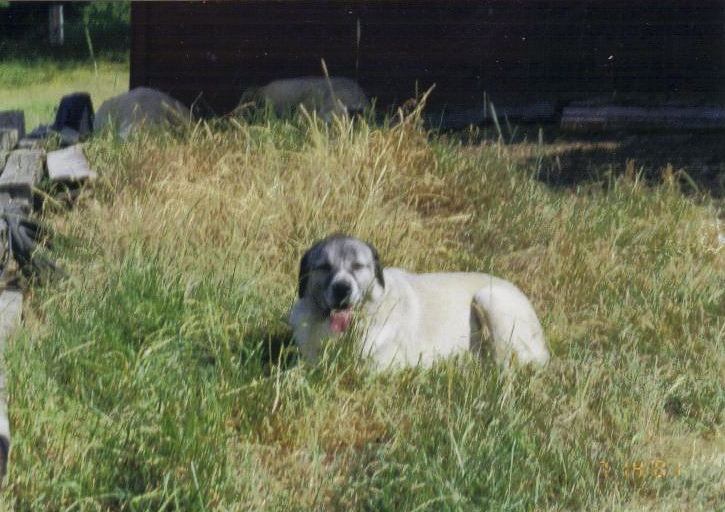 Early March: Lambing began, and went hot and heavy for over 3 weeks, with the mature ewes in the barn, and the retained ewe lambs in the granary. Very demanding! On top of that bone crusher, came the 3rd Annual Leg of Lamb Dinner. Since I was baking all the beans, as well as concocting meat sauces, making extra gravy, and helping serve, I slacked off on the ticket selling this year and quit at 65. The more tickets I sell the more beans I have to bake!

Late March: With the lamb dinner over, it was time to pursue getting the new livestock guardian dog! Our friends, the Klauke’s, who had purchased our ewe lambs a few years earlier, had acquired a breeding pair of Anatolian Shepherd Dogs, and were raising guard dog puppies.The Anatolians were native to Turkey, and were used to guard huge flocks of sheep and goats from wolves on the Anatolian Plain. They were so valuable that the native herders made them collars with metal spikes to protect them from the wolves. Not too many years after we got our dog, Turkey declared the dogs a national treasure, and refused to export any more of them.

On a Saturday morning, Sean, his friend Dave, and Dave’s sister, Sara, and I set out to pick out a puppy. Before leaving, we had put our two dogs, Dex and Patches, in the house, where Jerry was watching TV, and cautioned him not to let the dogs out. If we brought home a puppy, we didn’t want it traumatized by their racing out and barking. Dave and Sara went with Sean in his truck, and I drove myself in my car, the plan was for them to haul the puppy home.

When we arrived at the Klauke’s the pups all came running out to greet us. The one in the lead instantly took our eye, she was a beautiful big pup, with a fawn to grey body, and a striking black head. .She projected confidence, and personality! Sean and I came to the same conclusion, “This is the one!”

While I wrote out a check and visited with the Klauke’s for a minute, the young people loaded the puppy into the truck and left for home. I followed shortly, and reached home just after Sean, his friends, and new dog had gotten out of his truck. The group was gathered in front of the truck, and Jerry, looking out the living room window, did not see a puppy, so he let the dogs out. They came charging out barking up a storm!

I got out of my car in time to see the new dog disappearing around the front of the barn at top speed! Sean was already leaving to take his friends home, and they were part way down the drive. I hurriedly took Dex and Patches back to the house, and returned to look for the new pup.

I managed to climb the fence and headed for the top of the field. I was having hard going, as the corn stalk stubble was still on the field, along with snow in the rows. I was gasping for breath by the time I reached the top of the rise, and could hopefully see where she was, but there was still no sign of her. I had another 1/2 mile of hard going before I reached Hwy 10. I was fervently hoping Sean had looked back as he drove out the drive and had seen her make her escape over the fence, and had come back to look for her.

It was with great relief that I reached the end of the field and saw Sean’s pickup parked. As I reached the highway, I saw Sean searching along the road banks to the left for tracks, then he turned toward me and still looking on the bank for tracks, shouted that he saw her tracks going to the right once she had reached the road.

Just then I saw our neighbor, Milt Burroughs, coming out of his driveway which was just a little further on, and I yelled at Sean to catch him and see if he might have seen the dog. Sean did, and Milt said, “Yes, he had seen the dog!” She had come right up to him, and he had put her in a shed, and was hoping no one came looking for her, as she was such a nice dog! This was the neighbor from whom we had gotten Brindy more than l7 years earlier. He also had owned Brindy’s mother, a huge friendly St. Bernard, obviously he loved big dogs!

What a homecoming! Anyway, we got our dog back, and into the truck, and safely home. As it turned out, on the way from Klauke’s, the pup had gotten car sick in the truck, and thrown up on Sara’s lap, and by the time they got to our house and the barking dogs came barreling out, she’d had enough and took flight. This time the other dogs were still in the house, and we took her out of the truck and put her in the barn with the sheep, where she settled down and seemed perfectly at home. I was in the barn most of the time, as there were always chores to be done, bottle lambs to feed, etc. When I left the barn, I closed and locked the big North door, so she would not be going anywhere else that day!

Early April: It was a very slow spring, with snow banks still hanging on and temperature’s below normal. At that point, with the barn and granary overflowing with ewes and lambs, and the lots still too wet to turn them out, I was ready for spring! The thought that kept running through my mind was, “Come on Grass!”

“Sheba” was the name we gave our new dog. We were pleased to see how well she had bonded with our sheep. While I was busy with chores she was usually stretched out snoozing amidst a pile of sleeping lambs. I took her outside with me, but did not leave her outside alone yet.

1993 to be continued… more adventures with Sheba!

4 thoughts on “Voices From the Farm: Off to Get Our New Dog (Without a Clue to the Perils Ahead)”