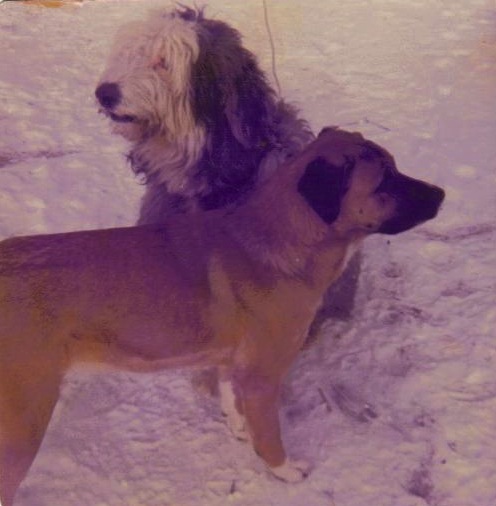 1989 – January: Life became more complicated and at the same time more interesting with each passing year. I was now not only doing the sheep full time, and a good bit of farm planning, but was also involved with both the Sustainable Farming Association, and the Land Stewardship Program, and devoting a good bit of time to each.

We were, however, making a good progress with the farm. One big benefit to me, was that we now had the barn full of our own hay as a result of haying the excess Birdsfoot Trefoil pasture the previous year, and this year would have hay from a 9-acre field we had seeded to Wrangler Alfalfa.

It was a welcome change from having to buy large truck loads of hay and unloading it. Inevitably, the hay was delivered on a week day while Sean was in school, so it was up to the trucker and me to get it in the barn. The driver would back the load up to the south side of the barn, where an elevator was set up to carry the bales up to the front of the barn loft. He would then proceed to drop bale after bale onto the elevator, while I did my best to keep up with carrying the heavy bales to the rear of the loft and stacking them. I soon devised a way to make it a little easier by strategically building a stack of bales under the end of the elevator, so when the bales dropped they would hit the stacked pile and bounce a good way toward the rear of the loft, saving me a lot of steps.

I still fondly remember the aroma of trefoil hay, it had such a wonderful fragrance, but we only had that when the pastures were growing so fast, in the flush of spring, that the sheep could not keep up with the growth. Then the excess was cut for hay. This year, with the 9 acres of alfalfa, we would have plenty of hay to take us through the next winter, and beyond. Another blessing was that the haying would be done during the summer when Sean was home. I would unload the hay wagons onto the elevator, and Sean would do the carrying and stacking in the loft … a much better arrangement!

March: Lambing began. Once again, it was a very successful lambing, our fifth year with a 200% plus lamb crop! Big Mumbo, now in her 8th year, again reverted to having quintuplets, but one male lamb was born dead. Big Jumbo delivered her usual fine set of triplets. I took one of her lambs to bottle feed, as well as two of Big Mumbo’s lambs, leaving them each two lambs to feed. Two lambs are enough for ewes in their 8th year to feed, they deserved a break.

Looking back at lambing records, I noted another ewe, Hollyhock, who had a single as a ewe lamb, then delivered twins every year through her 10th year. That pretty much explains how we maintained a 200%+ lambing average. We had a “twinning flock,” but enough ewes had triplets, or in the case of Big Mumbo, more than triplets, to bring the average up. I had paid attention to my breeding program to get to this point, but I was still planning to add more genes to the pool.

In 1985, the U. S. Dept. of Agriculture imported a number of sheep of the Texel breed from Europe. They were to be held in quarantine at the Roman L. Hruska Meat Institute in Nebraska until 1990, when they would be released for sale to American breeders. The Texels are a breed with an excellent carcass, which includes a unique double hind leg muscle, by which they have earned the nickname of the “beautiful butts!” They also were a prolific breed, averaging about 180% lambing rate, and possessed a nice fleece of medium weight. I thought they would be the final addition to my breeding program, and was watching the sheep news periodicals to see when they would be released, and who purchased them, so I would know where to look when I was ready to acquire a ram.

The peak of lambing can be a messy time, when the ewes are coming in thick and fast. There seem to be afterbirths everywhere you step, and it can be a slip and slide affair, so they are picked up and tossed out the back barn door. Of course, the dogs are there to grab their share … we don’t spend much on dog food during lambing! I recall a “blast from the past,” when there were 3 dogs competing: Brindy, Tushka, and Tatters. We also had a large grey cat at the time.

He was a house cat, but liked to spend some time in the barn. The cat was lying on the north end of the manger near the door one day as I was tossing afterbirths out the door. Suddenly, the dogs got into a brouhaha outside the door. Brindy, being the largest dog, was getting the better of the other two, when the big cat let out a yowl and launched himself off the manger, landed squarely on Brindy’s back. He dug in his claws, and away they went down the driveway like a blue streak!

They were about 2/3 of the way down our 1/4 mile driveway when we lost sight of them as the road took a drop going over a knoll. At some point, the cat apparently released his hold and jumped off. They came home separately, first Brindy, then the cat. These two were normally friendly, but I guess in a food fight, normal goes out the window!

Poor Brindy! She didn’t know what hit her, but the old cat didn’t like the big dog bullying the others, so he went into action!

This event must have taken place on a weekend and on a nice spring morning, as everyone was home and outdoors, so the whole family witnessed it. The picture was etched in all our minds. One “wag” among us suggested changing Brindy’s name to Claude, but that was quickly voted down by cat-calls, boos, and hisses.

May: Sean was graduating with honors from High School this spring, but the ink was not yet dry on his diploma before the first farming challenge of the season presented itself.

I had rented cropland at the rear of our farm to a nephew for several years, and had gradually taken some of the steeper land out of production to plant pine plantations, hardwoods, and wildlife shrubs, so finally all he had left was an 8-acre field which he had planted to corn the previous year.

He was, however, driving a semi coast to coast, and when we got an early snowfall which stayed, he hadn’t gotten his corn harvested. So, eventually, he was trying to combine it in the snow, slipping and sliding, getting stuck. Consequently, a lot of corn got knocked down, run over, and there were downed stalks and corn kernels everywhere.

We had planned to seed that field down to Birdsfoot Trefoil that spring, but how we were going to get the mess off the field so we could till and plant was the problem. We consulted our county agent and he thought our best bet would be to rent a flail chopper and shred everything. Then do deep tillage, and hope for the best.

So we rented a chopper, and Sean chopped the whole field, at least it looked better. We did not own tillage equipment, so we hired someone who made a business of it to till and plant the field. All went well and soon the trefoil seed was sprouting, but so were the corn kernels. In no time we had what looked to be a fine corn field coming along.

Next we tried putting the sheep in the field to graze off the corn, but there were no fences there yet and we had no control over the sheep. We could not concentrate them in one area to clean up the corn and then move then to a new area. They were free to run all over, and consequently they grazed here and there but the corn was growing faster than they were consuming it. The trefoil was growing nicely under the corn plants, but that could not continue forever.

We finally were reduced to cutting the corn, and baling it to get it off the field. Once that was accomplished, the trefoil flourished. The next challenge was to fence the field so we could use it as a lamb pasture, and lightly graze it after the lambs were weaned in the summer.

We had not gotten to the High Tensile Fencing at that point, so used Maxi-Shock wire and Quik Fence to enclose half of the field, then used Maxi-Shock wire on reels to divide the field into two long strips, which could be crossed with portable electric netting to form a new paddock every day. This worked very well for several years, until we were able to install permanent High Tensile perimeter fences on the whole field.

To be continued next week.

2 thoughts on “Voices From the Farm: Battling Cats and Dogs, and Quints AGAIN!”