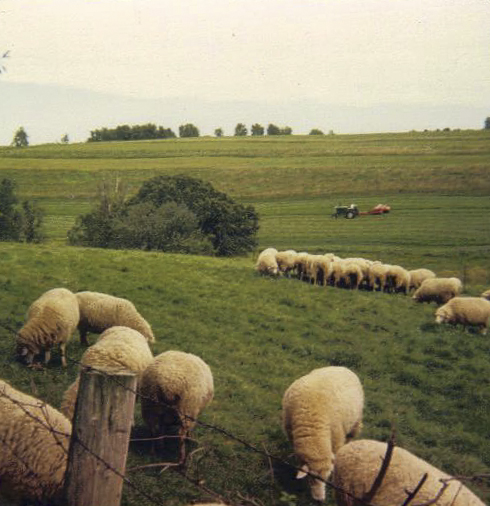 Now that I was relieved of all the SEMSPA (South EAst Minnesota Sheep Producers Association) duties, I was becoming involved in the Sustainable Farming Association (SFA). I had been interested in this group for some time, but no time to pursue it. Sean and I were in the process of transitioning to operating our own cropland, and working toward organic certification, so the SFA was a perfect fit, and now was the time! Once again I was committing myself to attending meetings!

March: Lambing time, and things were hectic as usual, but going well. “Big Mumbo” delivered quints one more time! One lamb was born dead, but four survived… three ewes and one ram. One of the ewe lambs was an extraordinarily fine specimen, and outshone her two sisters. (Remember that, there’s a future story here!)

There was an interesting case during the lambing. A yearling ewe began showing a partial vaginal prolapse. I remembered reading about Selenium injections as an aid in preventing threatened prolapses. I decided to truss her up with a prolapse harness which is a device to keep a ewe from straining and pushing the prolapse out further. It is also used in replacing a total prolapse, along with a ewe bearing retainer.

To construct this harness, you need four or five long pieces of baling twine tied together to make one long continuous piece. The center of this twine is placed over the top of the ewes neck with the two halves hanging down on each side. The two ends are then crossed over the brisket, then brought up under the two “arm pits”, and along the flanks, and crossed again over the spine just to the rear of the last rib. Then they are run under the rear “leg pits,” between the thighs and the udder.

Next, they are brought up over the rear end of the ewe, one twine on each side of the vulva and tail, then forward to the original twine over the back of the ewes neck and the two ends looped over this, then returned to the crossed twine over the ewes spine, looped over it, tightened and then tied. This harness must be so tight that the ewe can hardly stand up or walk in order to keep her from straining, and it must be tightened frequently as it works into the ewes wool and loosens. This process sounds very difficult, but is actually quite easy to accomplish once you get the hang of it, so to speak.

After trussing up the ewe, I ran to the house to review the Selenium article. Since she was only showing a partial prolapse, I decided to try the selenium treatment with only the harness, and not use a ewe bearing retainer. I returned to the barn and administered 1cc of Myosel B, Selenium, and Vitamin E. I kept the prolapse harness tight until the ewe was getting close to lambing, then loosened it, and she lambed with no problem.

In a case of a totally prolapsed vagina, this harness is used in conjunction with a ewe bearing retainer, a plastic T-shaped insert. Once the prolapsed vagina has been put back in place, the long stem of the “T” is inserted into the vagina and up against the cervix. The cross bars of the T-shaped insert will then wrap around both thighs of the ewe. Twine is then used to fasten the inserts eyelets to the baling twine harness, thus preventing the ewe from pushing out the retainer and the vagina.

A ewe can lamb safely through this, whereas replacing the prolapse and suturing to prevent it recurring, will, if the ewe goes into labor and no one is there to cut the sutures, result in a dead lamb and most likely a dead ewe.

As we progressed with the farm operation, we decided to compost our sheep manure in order to have a product that was easier and more pleasant to handle, and when finished could be added to newly grazed paddocks to speed regrowth for the next rotation. Most composting sites put their compost materials in a long row, and turned the row over periodically with a machine made especially for compost turning.

We had a compost pile rather than a row, and did not possess a compost turner. We did, however, own a large snow blower which was needed to keep our long driveway open in winter. Sean, the innovator, decided he could use it to turn the compost by simply blowing it into a new pile frequently.. It worked perfectly, and soon we had the nicest, fluffiest compost imaginable, and a pleasure to work with.

Sean was not only taking over the field work, but also many of the other jobs on the farm. One task, which I had done every spring, was cleaning out the two sheep guards – one at each end of the driveway. Through the Winter months, between snow blowing and traffic, the openings between the grates became filled with dirt and gravel so they would no longer prevent the sheep from crossing them, and had to be cleaned out… a long painstaking job of hand digging the packed dirt and gravel out of the spaces between the grates of the 8′ deep, 12′ wide guards. Thankfully, Sean was now taking over this hated task!

But there was an even more hateful job which I could not escape… cleaning the manure off the platform, which, during the barn renovation years before, I had built so my ewes could eat from both sides of the manger. This had been an old dairy barn with a wide manger. The cows only had access to the one side, but with their long necks they could easily reach all the way across the manger to consume the feed. The sheep, however, could only reach part way across, so there was always hay on the far side they could not reach.

The other side was the open space of the lower barn, where the stone inner wall supported the manger above. Hence, the need for the platform, and it worked beautifully, making it possible to feed twice as many sheep at the manger. But after a winter and spring with all the sheep in the barn, it was covered by a thick hard pack of manure.

Although Sean could clean the upper and lower parts of the barn with a Bobcat, the platform had to be cleaned by hand. The lower barn’s hay loft was above the platform, leaving very little head space. It was just fine for sheep… and dwarfs. But since dwarfs were highly unavailable in this area, I – at 5′ 2″ – was the next closest thing, and I was stuck with cleaning that platform.

I could not stand up without stooping and bending double from the waist, so I had to squat, or work on my knees, prying up the devilishly hard packed manure and throwing it off into the lower barn, where Sean could remove it with a Bobcat. I had many an aching back form that job, but the platform served its purpose, so it was worth it!

You know the old saying, “If it doesn’t kill you, it will make you stronger!”

2 thoughts on “Voices From the Farm: Transitions, Innovations, and Quints Again”