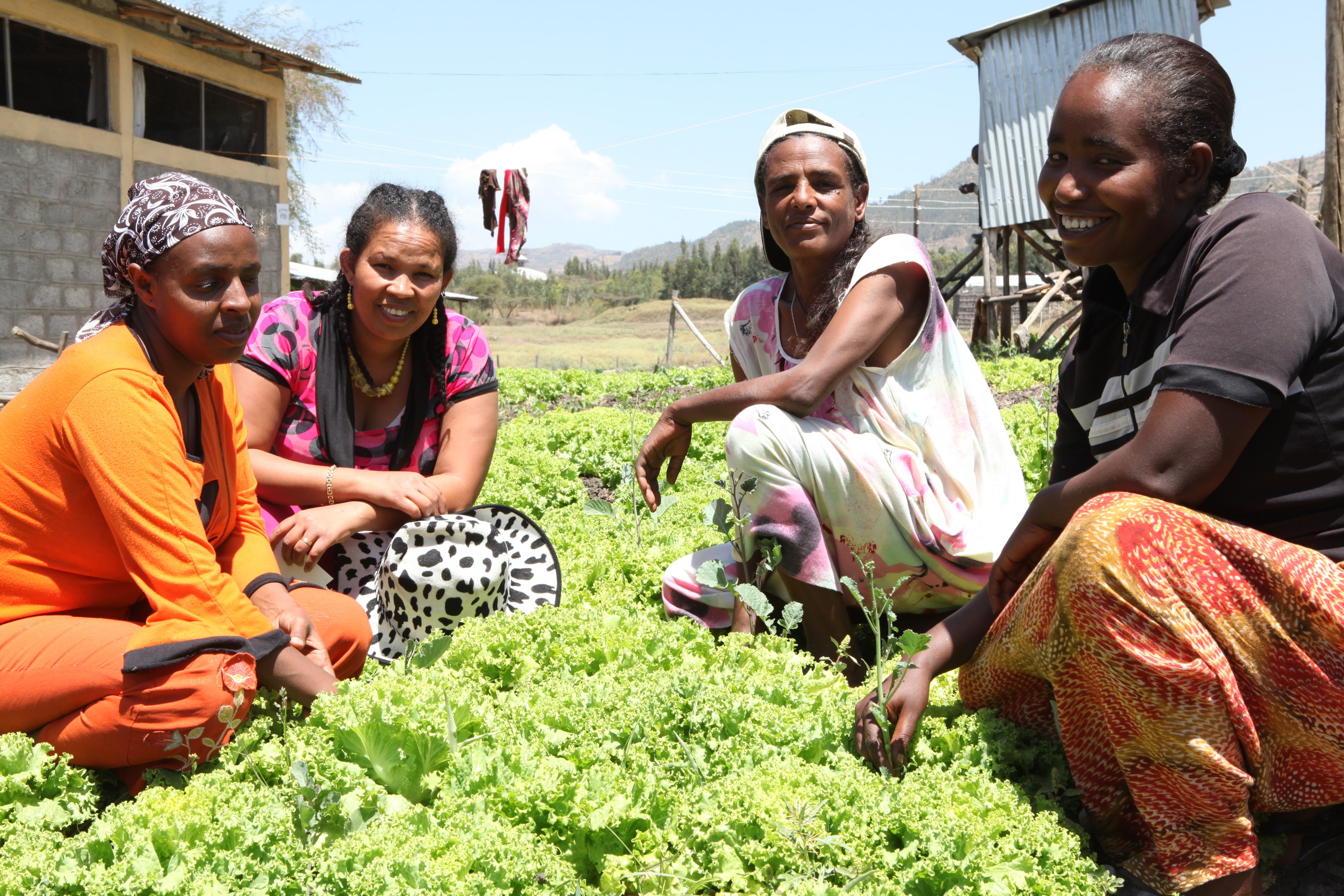 (The images included here are from several different USAID urban gardens in Ethiopia.
Please click on any image to see a larger version.)

When Meaza Birhanu, 39, learned she was HIV positive seven years ago, she was already bed ridden surviving on food donations from the World Food Program. The death of her husband prompted her to get tested and she was convinced that her death was next.

“I had no vision. I was in bed for a long period of time. My extended family living in the countryside wouldn’t receive my visits, as if my HIV status would jump out of my body and grab them,” she told me one evening in Bahir Dar, a city located in Northern Ethiopia. “I cried constantly because they wouldn’t even let me sleep at their house.” 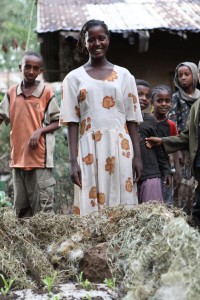 In 2009, Meaza joined an organization for HIV positive people that helped her gain easy access to life saving medication and convinced her to get out of bed and do something. As a group, Meaza and colleagues had more power and thus more possibilities of finding a livelihood.

One year later, the group of 55 members—all living with HIV—partnered with USAID Urban Gardens Program for Women and Children Affected by HIV/AIDS (USAID UGP) and began breaking land on a garden near the banks of the Nile River. Meaza had never before been a farmer or a gardener but she vividly remembered watching her father plow a small tract of land in the Ethiopian countryside.

By mid-2010, Maeza took up her new vocation as an urban farmer, and her outlook changed dramatically. In May, the group—known as Kalehiwot—planted corn. The rains came, the crop grew, and bushels of corn were sold on the market.

“Suddenly in the garden, I felt no pain. They gave me a job, something to look forward to in the morning and I earned money. Once I started gardening, I really woke up,” she explained.

By the end of 2010, the Kalehiwot group garden integrated their vegetable garden with animal husbandry, dairy farming, molasses production and bee keeping. Starting with nothing, today they are the ultimate portrait of urban agriculturalists.

Gardens have long been portrayed as havens of tranquility in art and literature. Francis Bacon called gardening “the purest of human pleasures” and gardens inspired Monet to cover his canvases with flowers and plants. So what is it about the garden plot that breathes serenity? Can we really credit a vegetable garden with improving Meaza’s life? And most importantly, is there evidence that gardening can offer social benefits for more people, especially for the sick and underprivileged such as people living with HIV/AIDS?

USAID Urban Gardens Program has been operational in Ethiopia since 2008. The development project—funded by the President’s Emergency Plan for AIDS Relief (PEPFAR)—aims to improve the health of women and children affected by HIV through the consumption of nutritious vegetables, which complement antiretroviral medicines with high contents of much needed energy, vitamins, dietary fiber and minerals.

USAID UGP—in its fourth year—has created over 330 group and school gardens in 23 cities throughout Ethiopia. Thanks to the program’s reputation and deftly garnered relationships with kebele leaders, the program trained more than 20,000 gardeners in 2011 alone.

Gardeners include people living with HIV, former commercial sex workers, child brides, war veterans, disabled men and women and multitudes of poor children who otherwise have no access to land, water and simple training in gardening.

Urban gardens are a valuable tool in improving food security thus alleviating poverty in Ethiopia, and successful gardeners have the potential to position themselves to improve their income, but the project goes beyond nutrition and income generation. And few people have stopped to consider the social benefits associated with gardening. And if urban agriculturists have suspected this third benefit, no one has every substantiated the notion with data.

To this end, USAID UGP has carried out an in-depth study examining the benefits of urban agriculture in the program’s gardens throughout Ethiopia. The study “Understanding the Social Impacts of Urban Gardening in Ethiopia” takes a look at 15 group and school gardens in 4 cities, and was completed in partnership with Tufts University. 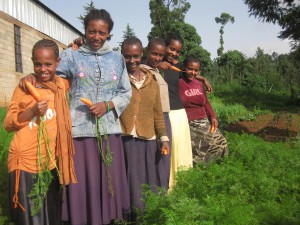 “Given the focus of the project monitoring data on ‘hard’ financial and production indicators, there was a need to explore the specific nature of social benefits and understand their relative importance,” says Ritu Schroff, the study’s lead researcher.

The conclusions are rooted in interviews, scoring and photographs taken by 150 participants, many of whom are living with HIV/AIDS. Thus, while the study also looks at the traditional indicators of financial gain and vegetable consumption, cutting edge participatory methods show researchers perceived social benefits in two categories:  1. Social acceptance in the community and 2. Self-esteem, hope and confidence.

In Ethiopian culture spending vast amounts of time with neighbors and family is a weekly, or sometimes a daily occurrence. Families gather around the traditional coffee ceremony and share stories, gossip and banter while one person roasts, grinds, and brews the beans in a clay pot over a charcoal cooker.

The inability to participate in the coffee ceremony or lack of invitation thereto is often a big blow to a family’s status as well as to a person’s self esteem.

A 13-year old male school­ gardener from the northern Ethiopian city of Bahir Dar told researchers: “We were so poor that people used to isolate us. They wouldn’t come when we invited them for coffee. After we got some wealth, working hard, all of them started to invite us for coffee. Now we drink coffee with seven people.”

Participants in USAID UGP gardens are often targets for stigma and discrimination due to their HIV/AIDS status. Much like Meaza from Bahir Dar, the community and even their own families frequently isolate and ignore family members. But stigma reduction is only the beginning, social benefits derived from gardening are endless. 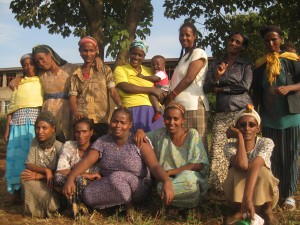 Becoming a productive member of a group garden, growing vegetables from scratch and involving themselves in sales and marketing  prove to the public that these gardeners have the capacity to do the same amount of work, if not more, than those people who are not living with HIV/AIDS. As a result, positive people move from being viewed as infected carriers of certain death to simply seen as urban farmers able to overcome the obstacles of living with HIV.

Many social benefits are intrinsically linked to other improvements, especially economic strengthening factors. For example, one school gardener mentioned how his family’s social status has improved due to a higher household income and the ability to buy kitchen utensils and even a TV.

“We are relieved of being despised by our neighbors [whom] we used to visit to watch TV,” he said.

For many, the group garden is more than just a worksite. Both gardening and the chance to sell vegetables to neighbors or shoppers in a market create opportunities for socially and economically disadvantaged people to interact with the rest of society.

One woman from Adama, the capital of the Oromo region in Central Ethiopia, said “cabbage helped me go out and meet with people. I have known many people because of cabbage.”

“From results like these, we see that cabbage, a simple, leafy vegetable high in vitamin C has done more than just nourish a body. Cabbage has actually enlarged her circle of friends and thus given her a chance to have a normal social life,” says Tsige Teferi, the program’s director. “The gardeners who can liberate themselves from domestic confinement feel empowered to play a larger role in their families, neighborhoods and communities. That’s the power of a garden.” 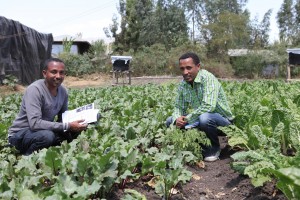 In addition to the freedom to leave their homes and be in the garden, many program participants now feel like they are associated with a job and consider their garden plots their office and more often than not, their favorite place to be.  Where many were previously unemployed, something as simple as a garden plot made an important difference by providing a purpose.

A 50 year old gardener told researchers: “In the past, I would never leave my home. I would not even go to other people’s homes. Now I have started going out and spending time in the garden.”

In the same vein, family leaders have reestablished their role as breadwinners for their families. According to the participants interviewed, gardening fosters feelings of self-reliance and allows mothers and fathers to provide for their families.

“I managed to raise my children from the benefit that I got from the garden. I feel happy in getting organized with other people in the garden and being able to raise my eight children all by myself because my husband is not living with me,” says a mother from a garden in Bahir Dar.

Social Is Number One

When participants were asked to score the benefits from urban gardening and decide which is of most importance, social benefits outweigh both economic and health benefits. Social status is of tremendous importance both among families and communities.

When asked why, some gardeners said:

“I value social relations most. Love exists if you live with a community.”

“I value my social life most. Social life brings education. I get knowledge and living methods from meeting people. Living with people is useful.”

Other gardeners deemed self-esteem and mental peace as the fundamental keys to success and told researchers that confidence and peace are the top benefits of gardening. 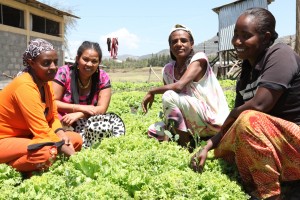 People living with HIV are prone to many more health issues than those who are not. Worrying, depression and anxiety are common. Many of the project’s participants reported that when these feelings of despair appear, they resort to the garden to forget about their problems.

A 30 year old gardener from Adama told researchers: “When I feel angry, I just go to the garden and spend my time there. I feel happy when I do my garden activities. When I go there and work, my mind gets rehabilitation.”

The study’s participants started gardening in 2009 under the tutelage of USAID UGP technical staff and were interviewed in mid-2011. The question of sustainability remains the underlying issue associated with the study. It is the perceived benefits that keep people gardening, and social issues are tied into long term success.

In 2009, when the Urban Gardens Program began, over 5000 people were enrolled and began gardening. By mid-2011, the majority of these participants were still gardening to varying degrees. As long as gardeners continue to feel hopeful and an integrated part of their communities, there is no reason to abandon their plots.