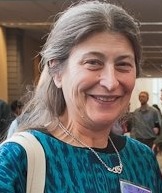 Our Good Food on a Budget correspondent, Kate Hilmer, recently finished reading Eating Animals by Jonathan Safran Foer. “One thing is for certain, and this book made it painfully clear to me: meat matters,” says Kate. “To what extent does it matter? It’s a complex and personal question that each of us must decide for ourselves.”

Anne Schwartz, a Washington farmer, lives and farms with her husband Michael Brondi in eastern Skagit County in northwest Washington State. While her husband maintains a full time job off the farm, Anne has operated Blue Heron Farm since 1979. Anne also has an animal science degree from Washington State University (WSU).

Here is how Anne responds to those like Kate who are trying to decide whether or not to eat meat:

I graduated from WSU with a degree in Animal Biology and in the course of my studies decided to become a vegetarian, not a popular thing to do in the Animal Science Dept in the 70’s I can assure you.  I also have been a food and farming activist since that time and helped write the organic livestock standards and regulations for both our State and Federal National Organic Programs.

There are plenty of reasons to avoid animal products that are produced in Confined Animal Feeding Operations (CAFO’s), but I would argue that many organic or natural livestock systems are one of THE most sustainable systems we have of capturing energy from the Sun and turning it into high quality, nutrient dense, food for our bodies.

With all due respect to Francis Moore Lappe, (Diet for a Small Planet), she did a great disservice by not separating the environmental costs and humane living conditions of CAFO’s from small farm or family livestock operations, or examining the terrible things done to soil and plants in the growing of fruit and vegetables.  There is a gathering body of evidence showing that row crop and vegetable growing operations have a large carbon footprint.

People want fresh produce year round shipped from southerly climes, but they don’t look at the true costs of supplying nitrogen and other nutrients to the soil to grow vegetables or growing protein in other forms. They don’t look at the cultural impact on developing countries to displace their own food systems to grow produce for export.  The growing body of books addressing the global degradation and destruction of water resources should make people look at the True costs of growing fruits and vegetables.

Grass and other perennial forbs, on the other hand, are the basis for a true permanent agriculture.  It would be best for the planet, if no soil was beat into the granular, pulverized condition necessary to plant, cultivate, irrigate, protect from disease and pests, and harvest the prettiest vegetables and fruit.  And that doesn’t include the resources necessary to wash, package and ship this food to the people of the world.

Most of the soils around the planet can’t be cultivated at all, much less sustainably. Grass is the great healer of the earth, it allows the time and soil conditions necessary to reestablish micro flora and soil structure, critical to reduce diseases and insects. Whole books have been written about how grass heals the soil. And waste products from animals harvesting these plants provide a critical source of nutrients to keep land biologically active and productive.

I would also argue that it’s more than what is available on the shelves of grocery stores. People who eat need to understand what food producers are up against.  From my perspective as a organic farmer for more than 30 years, the long term resiliency of our ability to grow any food depends on and requires that we work together to integrate our production systems among all of our resource extraction and conservation efforts.

For example, the loss of the dairy farmers in Western Washington is the loss of a critical cog in the wheel for sustainable vegetable and seed production.  Talk to any Skagit Valley farmer to get a glimmer about the challenges they face without being able to trade land with their neighboring dairy farmer.  Without the healing time of pasture, it forces them to use more fertilizer, pesticides, water and fuel to produce these crops, all of which have a higher carbon footprint and that’s pretty much the same for organic production as well.

I would argue that done right, there is no better source of nutrients than harvesting the milk and meat of ruminants-cows, goats and sheep.  Historically, and still widely practiced around the globe, poultry and pigs routinely get the waste products and scraps left over from other food production, thereby converting waste into digestible food and serving as a critical free resource in providing a self renewing affordable source of nutrients.

I believe we as individuals are tasked with finding which foods our genetically unique body does best with, no small task given life in 2012.  As those discoveries are made, then we must search for those production systems, which support local farmers and food grown in the most environmentally elegant way.  We live in the northwest.  Our rain and temperate climate can grow grass and legumes with minimal inputs almost year round.  It really makes sense for us to eat what those perennial forbs can nurture.

That is why people have been keeping livestock since before cultivated agriculture was begun.  And the not so pretty reality is that animals eat animals.  It is one of the foundations of the entire planetary and oceanic ecosystem.  People are animals too and though we can choose to live with no animal products in our diets, there are consequences to all of our actions.

Sustainable food production on this planet must incorporate producing food from places that we shouldn’t cultivate. The more land that stays in grass and other forbs and perennials, the more that animals – wild and domesticated – are dispersed over that land, the better we all will be.

As one of the pioneering organic farmers and advocates for change, Anne has been active with several organizations advocating for sustainable agriculture for over 30 years. She has served on the Board since 1979, with many years as President, for Tilth Producers of Washington, the organization serving organic agriculture.

Her early focus was developing legislature and regulations to define and institute Organic Certification programs in both Washington State and at the Federal level for the National Organic Program. She was also instrumental in creating the Center for Sustaining Agriculture and Natural Resources at Washington State University. She has served on the advisory board for the CSANR since it’s inception in 1987.

In 2003, she was awarded Woman of the Year by the College of Agriculture at WSU for Leadership and Public Service. Anne has continued to work closely with WSU Faculty and Administration as well as the Washington State Legislature on issues affecting rural communities and agriculture.