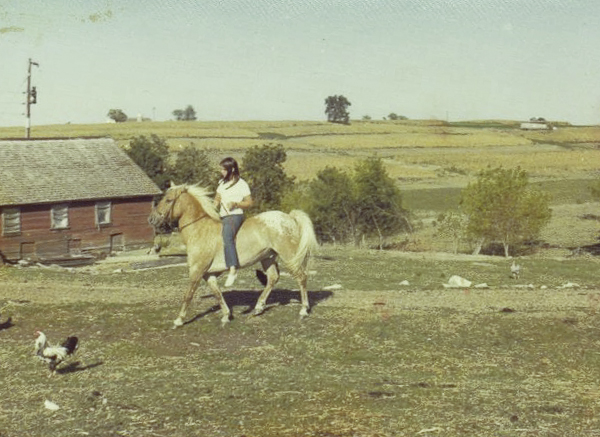 We had an early fall, with first frosts on September 12. Lisa and I covered the tomatoes, peppers, cucumbers, watermelons and cantaloupes with plastic tarps so we were still harvesting them in October, otherwise they would have been long gone.

Our young orchard produced a huge apple crop that fall and my sister, Merle, also had a bumper crop. We decided we should make apple juice and can it for winter enjoyment. I was in possession of an old, but usable apple grinder and she had a cider press. She also had a second room in her basement which would give us plenty of room to set up our equipment, and it had a floor drain so it would be easily cleaned up.

The parts of our mutual equipment did not fit together perfectly, so we had to make some impromptu adjustments, but finally we were ready to roll.  Merle’s husband, Jyles, (whom we always called “Uncle Buddy,” as Lisa had dubbed him that when she very small… he was her “buddy,” and  her “uncle,” hence, “Uncle Buddy”), was going to crank the grinder. Although he had suffered a disabling stroke a dozen years earlier, and walked with a leg brace and cane, he still managed to plant and care for a huge garden every year, and he was up and ready to go for this apple juice “gig!”

We were a motley crew! Lisa had gotten something in her eye when picking apples earlier in the day, and since the eye was scratched and irritated, we put a patch over it. So she was there with her eye patch, feeding apples into the top of the grinder, Uncle Buddy was grinding them up, and Merle and I, barefoot and with our pant legs rolled up to our knees, were running the press, filling containers and replacing them with empties.

Uncle Buddy got to cranking away so hard we could hardly keep up with the flowing juices, and then he got to laughing so hard, we didn’t know if he was going to make it. Soon we were all laughing uncontrollably and making a huge mess, but we did turn out a huge amount of juice, and it was a really fun evening! I don’t remember the amount from that night’s efforts, but I know that I canned 60 quarts of apple juice during the fall, and it was delicious!

Our old “Pony” had been affected by founder several times. Founder, or laminitis, is inflammation of the laminae, or fleshy part of a horse’s hoof, and is very painful and debilitating.

The first time was, of course, on alfalfa. But ever since that, he had foundered on most anything and everything, the most recent being acorns. The big oak tree east of the house starts dropping its huge crop of acorns in September. Many of them fall in the yard, but many others drop in the pasture beyond the yard fence, where they lie thick on the ground. The sheep love acorns and are not affected by them. In fact, while most sheep producers “flush their sheep,” that is, get them in good shape for breeding, by feeding them grain along with their pasture or hay, we flush ours on apples and acorns which are in abundance in our pastures.

This year we noticed that Pony was eating the acorns, and very shortly thereafter he went very lame. We had the vet come out and give him antihistamine shots, but it didn’t help. I went to the vet’s, got some other meds, and Lisa and I gave Pony shots for five successive days. These did not help either, and he had been hobbling about stiffly for nearly a month. We were so concerned, such a beautiful, good pony, and we could barely stand seeing him in such a condition.

One day a man stopped by to “talk sheep,” and when he saw the old pony, he told me about an Amish recipe that would cure founder. He did not have the recipe himself, but gave me the name and phone number of a man at Cashton, WI, who had the recipe and had used it on another person’s horse, and he swore it worked. I was not too optimistic at this point, but I called and got the recipe.

It called for administering one teaspoon of powdered alum orally, twice a day, for a pony of about 400 lbs., more for a larger animal. This could be continued until improvement was shown, or up to 30 days if necessary. And for soaking the front feet for fifteen minutes a day, for 5 days, in about a quarter inch of pure Hilex bleach.

I proceeded to follow the instructions faithfully, and I could hardly believe it, but after 6 days, Pony had improved so much that he was going along with Sundance clear out to the pasture at the far end of the driveway! It was a great relief to us to see our old pony moving about so well and soon Sean was able to ride him again.

I was so happy at the successful outcome of treating Pony, that I hardly minded having had to drill a new $6,000 well. That’s not to say I was thrilled, and by the time the submersible pump was installed that would add another $1,000, but at least we finally would have good water, and plenty of it. Our new well was 525 feet deep and, at test, pumped 11 gallons a minute.

We had previously struggled along with our old well for a year and a half. We had to have it pulled time after time, and bailed out, as those old wells were not cased very deep, and below the casing sand started caving in, disabling the well. Finally, a man working on it broke the old casing off down in the shaft, and there was no more fix to it! At that point, we had to buy water from town for over a year. It was hauled out to our farm in one of Caledonia Haulers’ tanker trucks, and then pumped into a cistern from where it was piped to the house. So, after three years of hassle, it was a great relief to have our own well again, and excellent water!

We sold our male lambs off pasture in the fall, sold a few ewe lambs to other producers, and retained 20 ewe lambs for breeding. Finally, our flock would be growing pretty fast. Of course, by this time we had reached a point where we had to cull a ewe or two now and again due to mastitis or some other problem.

The old “Mama” had passed on the previous year. We didn’t know how old she was, but we had her 9 years, and she was termed “the old ewe” when we purchased her, so at the very least she had to be 14 or more years old. We lucked out by getting longevity in our first sheep, and it was a heritable trait, which was passed on.