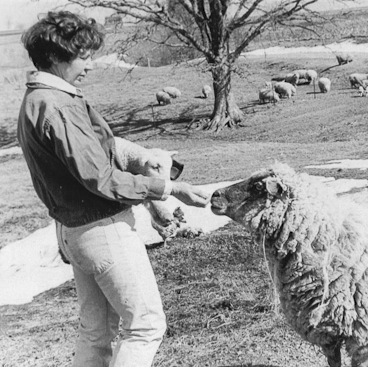 After a hard day’s shearing was accomplished, all the beautiful fleeces were stacked under a window near the front of the barn. The price of wool was very low, due to the prevalence of polyester clothing, and also to a large influx of imported wool from Australia.

At a price of thirty three cents a pound, I did not intend to sell the wool at that time, but would add it to the last year’s clip, which was stored in my sister Merle’s dry basement. Hopefully, the price of wool would rise to a decent level before her basement overflowed, so the wool was awaiting transport to her farm the next morning.

Mother Nature however, had other ideas, and late in the day a near-tornado formed with horrendous winds, which sent everyone scurrying to the house until the storm passed. To my chagrin, when I returned to the barn, the window above the wool had been blown out, and many of the outer fleeces had gotten wet. I spent several days drying the wool in various ways before we could haul it to my sister’s farm. “Best laid plans of mice and men,” and women!

The lambing had gone well, and our 32 ewes had given birth to 53 lambs, or a 165% lamb crop. However 2 lambs had been lost, one born dead, and the other not long surviving after a particularly difficult birth. This was almost inevitable, despite the shepherd’s best efforts, some lambs would be lost. This was especially true with multiple births, where sometimes the lambs were not presented normally.

If you saw a head appearing before the front feet, you would have to go in past the head, find the front feet, then flex the joint above one hoof and bring it up carefully so the hoof was presented, and then go back in for the other foot. This was fairly simple, once you had mastered it, but there were many other presentations that were extremely difficult to deal with, such as two lambs being presented at once, and one forward and the other backward, and sometimes there was even a third lamb to complicate the problems further.

After several years, one can deal with these things with some degree of confidence, but the first time you come up against it can be a traumatic experience. The lambing season can take its toll on the shepherd too, with nights often spent in the barn until 2:00  or 3:00 a.m., getting the lambs safely on the ground, and then moving the new families into a lambing “jugs,” where they can safely bond, and not become separated from each other.

There is one peril, which doesn’t happen often, thankfully, but does occur now and then, much to the shepherd’s dismay. If a ewe is in labor and there is another ewe close to starting labor, the latter, once the first ewe has dropped a lamb, may decide that it is hers and try to steal it. They are incredibly  hard to dissuade, unless you have a spare pen to put around the interloper, which is unlikely.

If the actual mother then goes into labor with a second birth, the MLS,(miserable lamb stealer) will lick off the first lamb, muttering to it all the while, and get it to follow her to the far end of the barn. By the time the actual mother may desperately try to find her first lamb, it is too late. It has been cleaned off and no longer smells like her lamb. You will likely not be able to get her to accept it, and in that case you had better hope the MLS only delivers a single lamb and will feed both her lamb and the stolen lamb, or you are stuck with a bottle lamb.

We got some much needed new fencing put in that spring, and also located a fellow who owned a John Deere “no till” drill. We hired him to interseed a grass-legume pasture mix into 6 acres of our big front pasture. Adding legumes improves a grass pasture immensely, as the legumes impart nitrogen into the soil, which boosts the grasses growth. These improvements were very timely, as with our ewes and their 51 lambs, we would have 83 head grazing this year. We needed plenty of pastures to rotate through, and with more fences we would spend less time rounding up sheep from where they should not be.

Another project which we had been working on since the early years was the eradication of burdock, a tough weed which bears a multitude of bristly burrs. They are notorious for attaching themselves to the wool of passing sheep and making the wool practically worthless. We had very nice wool, so we needed to be rid of the burdock. The pastures, once we had enough sheep to graze them efficiently, were relatively easy to keep free of burdock, as the sheep ate them off repeatedly when they were rotated through pastures.

The woods pasture was more of a challenge, as a dry run ran through the center of the small woods, and the burdock thrived along its edges. The sheep were not in the woods until they had grazed the front pastures, but then they had to go through the woods to get to the little meadow pasture just west of the woods. By the time they got there the burdock had grown big and tough, were past being eaten and already were covered with immature burrs. So after a few years we declared war on them.

In the fall, after frost had killed the standing burdock with their big crop of burrs still on the branches, Lisa and I pulled them up, roots and all. They were relatively easy to pull as the ground was alternately freezing and thawing and remained quite soft. We made large piles of them, and after the first light snow, we burned them burrs and all.

This significantly lessened the burdock problem, and we then made a routine of grazing the sheep in the woods in very early spring so they would eat off any new burdock plants, and then again about a month later, to get any regrowth. This slowed the burdock growth so that one more grazing in the early summer pretty much did them in, and any surviving plants were manually chopped off before they could set seed.

My Dad had passed away in early Spring. My Mom was still on their farm, only about 6 miles from our farm. I tried to get down as often as I could and spend time with her, and she seemed to stay in quite good spirits. No doubt her many interests were a blessing!

She was always making afghans, pillows, and quilts for her children, grandchildren, and great grandchildren, of which there was an unending supply. Our Sean was the youngest grandchild, as well as the 54th. Mom loved puzzles and games of all sorts, and soon after Scrabble came on the market, I got her one. She quickly became one of the most inveterate Scrabble players imaginable.  We played many hotly contested games, and even at 2:00 or 3:00 a.m, when I protested I needed to go home, she was always up for “just one more game.”

Mom still had the little dog, Holly, that I had given my Dad many years before. They were inseparable, wherever Dad was, there was Holly, but she missed him so much she began wandering off for a day or two, perhaps she was searching for him. But once she was gone for almost a week, and Mom felt quite bad about that.

A family friend thought they might have seen her in town, so we searched high and low, and also alerted the town police to be on the lookout, but to no avail. Then, suddenly, Holly came home on her own. But, she continued to wander away periodically, and finally she did not return.

2 thoughts on “Voices From the Farm – Shearing, Lambing, Pastures, and Scrabble with Mom”