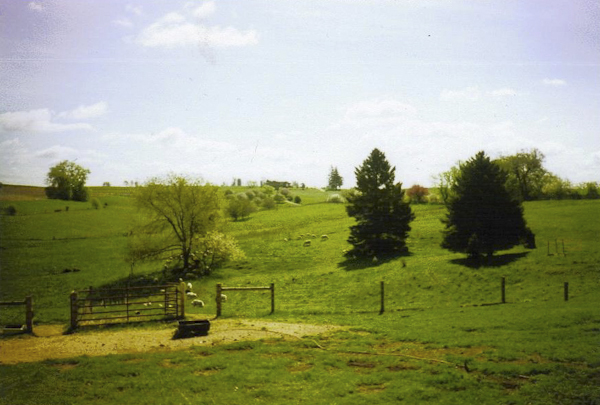 After the traumatic episode of the bloated sheep we began penning them in the barnyard overnight, and in the morning we gave them a good feed of hay before turning them back into the alfalfa pasture. We also put out bloat guard, which hopefully would help prevent bloating, but there was no guarantee and we still had to monitor them constantly. We did not leave them in the alfalfa too long at each grazing session.

It had been quite a dry spring, so although brome grass had been planted along with the alfalfa, the grass did not grow as well as usual. The alfalfa, however, with its deep roots, did extremely well. This complicated the problem further, as the grazing sheep, instead of getting a mouthful of alfalfa and grass, which would have helped avoid bloating, were getting the straight alfalfa. However, as the sheeps’ digestive systems became more acclimated to the alfalfa, the tension began to lessen. By the time they finished grazing the alfalfa, the native grass pastures had recovered enough to start grazing them again.

I had another concern which had been on my mind for quite awhile. The beautiful dog, Grey Brother, who had been so protective when Sean was a baby, had, by the time Sean was old enough to be outside playing in the yard, become increasingly worrisome. He had several times growled when Sean tried to pet him, yet he would not stay away from Sean.

If I was working inside and Sean was outside, I was constantly going from window to window, checking where Sean was and where Grey Brother was. I tried to make sure, if Sean was on one side of the house, that Grey Brother was on another side. But, watch as I might, suddenly Grey would have moved and be near Sean. I had the strong feeling that we really needed to find a new home for Grey Brother, but how could I ask Lisa to give up her beloved dog? It was especially difficult to think of, since she had already lost her first Grey Brother tragically a few years earlier.

Matters came to a head on July 1. I was working inside the house, but had just checked and seen that Sean was playing with toys on the sidewalk on the south side of the house, just in front of the porch. Grey Brother was sleeping under the big oak tree on the east side of the house.

Suddenly, there was a vicious growl, a scream and crying… I dashed out the door, and was horrified to see that Sean had been bitten in the eye. There was such a mass of blood around the eye that I couldn’t tell if the eye was still there, or not. In a panic, we rushed him to the hospital in La Crosse, WI. An examination showed the eye itself was intact, but the tear duct had been severed, both eye lids cut, and there were small cuts above the eye brow as well.

Thanks to some excellent surgery, they were able to locate the part of the tear duct, which had retracted, by infusing sterile milk into the other end of the tear duct which remained, and then were able to join the two segments, and stitch up the cuts. He was in surgery a long while, and everything was complicated when Sean threw up just after the surgery, and got fluid in his lungs.

All in all, it was a very scary afternoon and night. I had to stay in the hospital with Sean for two more days, as we had to frequently put him on a breathing machine to make him cough, which helped to get the fluid out of his lungs. Once his lungs cleared, he healed well, and though he had to wear a shunt in the eye for two weeks, his scars were amazingly small and as he grew they eventually disappeared altogether. Best of all, his vision was not impaired!

It was a blessing that the sheep were back grazing the native pasture, and the folks at home were able to mange fine until Sean and I were home again. Now, a decision had to be made about Grey Brother. We all agreed he had to go, and although Lisa was sad, she knew it had to be and accepted it. We decided to run a “free to a good home” ad in the local paper with the added caution,”not good around young children.”

A young man, who lived about a dozen miles away, came to look at Grey Brother, liked him very much, and took him home with him. We went to visit them a few months later, and Grey Brother was in a good place and much loved by his new master. Sadly, a couple years later, he was run over during a heavy snow storm when he was apparently crossing the county road to look for bones from a deer carcass which hunters had left in the fall.

Another mishap, of less magnitude, occurred later in July when Lisa had a friend staying over for several days. Between the two of them, they managed to leave the gate to the house yard unlocked two nights in a row. The sheep of course, while everyone was asleep, soon discovered they could get into the yard, and then into the vegetable garden where they ate the lettuce, cauliflower, beet and carrot tops. The second night they got all the flowers!

But, I still had another large garden where the sweet corn, potatoes, green beans, squash, etc., were pretty much intact, except that a couple sheep got in there briefly and ate off the potato and green bean tops. Those sheep, after all the travail over their pastures, were on the lookout for every chance to get in where they should not be!

Since the native grass pastures were holding up well, the second growth of the alfalfa was harvested for hay and went into the barn loft for winter feed. The third growth, which was less heavy, and also had quite a good amount of brome grass making a comeback, was grazed through the fall without any further incidence of bloat.