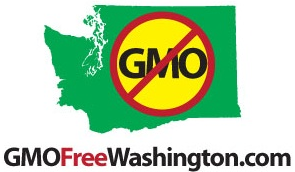 Genetically Modified Organisms – GMOs – are “the result of a laboratory process where genes from the DNA of one species are extracted and artificially forced into the genes of an unrelated plant or animal,” according to the Institute for Responsible Technology. Currently there are no federal laws in the United States that require GMO foods to be labeled as such. Nearly 50 countries around the world DO require labeling.

This action originated in the spring of 2011, when eastern Washington farmers brought a petition containing 1,200 signatures to the Legislature, calling for labeling of GE foods. Fearing for economic repercussions should countries like Japan and members of the European Union reject GE wheat, these farmers took action to protect their livelihoods.

Consumers should be aware that a raw or processed food product that contains grain-fed meat (beef, pork, chicken, turkey) or any ingredients containing soy, corn, sugar or canola is very likely to contain genetically modified organisms. Presently only two labels ensure that no GMOs are present in food products: Organic or Non-GMO verified.

Today corn and soybeans are the two primary food grains that are genetically modified, although sugar beets and cotton are also major crops. GE wheat and alfalfa are next to be introduced commercially.

Corn: 44% goes for animal feed, 30% goes for ethanol, 6% for sweeteners and the remainder (including a fraction of a percent eaten as fresh sweet corn) goes to cereals, starch and “beverage alcohol.” A large percentage of the corn planted every year is genetically modified; 72% is modified to be herbicide tolerant (Ht) and 65% is modified to be insect resistant (Bt). Be aware that much of the genetically modified corn has both traits.

Soybeans: 59% of the soybean harvest is crushed for oil (the meal left from that crush is used as animal feed) and 90% of the oil is edible oils, 6% is used for seed, animal feed, industrial uses, and human food other than oil. Soybeans show the highest adoption of genetically engineered crops of those grown in the US; 94% of all soybeans are herbicide tolerant (Ht).

GoodFood World strongly supports this legislation and will continue to provide information regarding the introduction, production, marketing and sale of food containing genetically modified organisms. Our mission is to help good people sell their good food products and educate good people to buy, prepare and enjoy good food. And our definition of “good food” does NOT include genetically engineering.

We encourage you to learn more and support GMO labeling in your state!

The Non-GMO Project
GMO-Free Washington
California Initiative to Label GMOs
GMO-Free Idaho
Just Label It: We Have the Right to Know
10 Things You Can Do About GMOs in the Food System