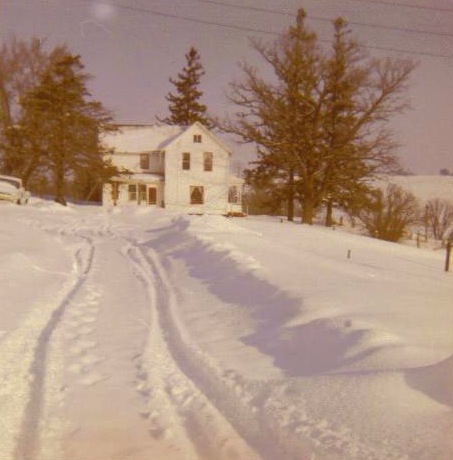 1972…The 70’s were wearing on. They were not the best of times, nor the worst of times; but there was such a prolonged series of mishaps, accidents, and illness that, at times, it seemed if it were not for ‘bad luck,’ we would not have had any luck at all.

In early Spring, shortly after Sean turned a year old, he climbed onto a kitchen chair and tipped it over backward. On the way down, the back of the chair hit the edge of the washing machine. The middle finger of Sean’s right hand was caught between the chair top and washer and was sheared off just below the first knuckle joint. There was no car at home, so I called Jerry to come home and get us to the hospital as quickly as possible. Then I phoned our doctor and told him we were heading for the hospital.

Our big barnyard gate was closed, as the ewes and lambs were in the barnyard, so to save time, carrying  my sobbing child, and holding the severed finger on with a wet washcloth, I managed – when I saw Jerry coming – to open the gate so he could drive through, then right around the circle and back through the gate. Then I closed it and we were off to the hospital.

The doctor met us there, and since getting the finger reattached as quickly as possible was important, he would have to sew it back on without administering a general anesthetic, and he could not numb the finger as it was so tiny.

So, it fell to me to hold my screaming child down, while the nurse held the arm and hand still so the doctor could do his job of stitching the finger back on.

I got through this somehow, but when it was done, I needed to sit down and put my head between my knees, and then have a glass of water. I would hope to never have to do that again! All the efforts payed off, as the surgery was successful and the finger grew back without further incident; although as Sean grew up, that finger was somewhat longer than the same finger on his opposite hand.

We had lost our much loved dog, “Grey Brother” in a freak accident back in 1970. A friend had a male Yorkshire Terrier and very much wanted to get some puppies from him. Our female terrier, “Tatters,” was due to come into estrus and we decided to try to breed the pair. So, when the time was appropriate for breeding, she brought her dog out to the farm. Of course, I had to make sure that Grey Brother was safely restrained, so he didn’t do in the little Yorkie.

I decided the safest bet was to tie him in the granary, making sure his head could not reach the East granary door, which I shut and lowered the bar lock. There was also a West door on the opposite side of the granary, which was also shut. Some long ago critter had chewed a fair sized hole in the corner of this door, but I made sure that Grey Brother could not reach this hole to get his head out.

So, after bringing a bucket of water for him to drink, I left feeling everything was safely taken care of, and that the little visitor would also be safe. Grey Brother however, was not happy about this state of affairs, and kept up a constant barrage of barking. After the breeding pair had been allowed quite a length of time in which to accomplish what we hoped would be a successful breeding, I suddenly realized that the barking in the granary had stopped.

I ran to the granary, and was appalled when I opened the East door. Unbelievably, Grey Brother had backed his body out through the hole in the corner of the West door, but of course, as I had made sure he could not get his head through, and as the bottom of the door was quite high off the ground, he was left hanging in mid air, and he had been strangled.

I was heartsick! Who would have ever thought he could back himself out the hole, certainly not me! But again, another pitfall. The learning curve seemed to be pretty steep. We missed him so much, as not only was he a loved pet, but a great guard dog for the sheep, and an all around good dog.

In about the same time frame as this unhappy turn of events, my friend and neighbor, Carol, had bred her female Norwegian Elk Hound and she had a litter of beautiful Elk Hound puppies. Shortly after Sean was born in February 1971, she brought us an Elk Hound puppy as a replacement for Grey Brother… he became Grey Brother the 2nd. When Spring came and the weather was warm enough, we would put Sean out on a blanket on the lawn, and were delighted to see that the new Grey Brother would come and lay close beside him. “How nice,” we thought, “they will grow up together!”

In January, 1973, when Sean was just about to turn two, my sister, Greta, came up one day to go skiing. She, Lisa, and I  were downhill skiing on the hill below the house and having a great time. There were a lot of clumps of tall grass in the pasture, but we were skiing right through them.

Suddenly, my right ski hit a tall clump which had bent over so the top of the grass was frozen beneath the snow. The clump did not give way, and it turned the tip of my ski up hill, taking my foot with it. I fell of course, and my ski was still on as the bindings had not released.

When I saw that my foot was on backward, I thought that I could not have that, so I got the bindings released and took the ski off. When I saw that my foot was still on backward, I turned it around so it looked right. Of course, I was in shock! Greta and Lisa were at the top of the hill calling to know if I was alright, since I hadn’t gotten up. I wouldn’t answer them until I got my foot on straight.

Of course I did have a broken leg, and it was a slow and painful walk home, as with every step my foot would slew off to the side. Still, I kept thinking that I could not have a broken leg, not with a soon to be two year old to take care of. Once we finally got home and took my ski boot off, the foot immediately began to swell, but my knee, which had been badly wrenched, hurt the worst.

It being a Sunday, we made a call to our local doctor who agreed to come to her office and examine my leg. She said, incredulously, “You walked home on this?” Then added that no way would she touch it; we would have to go to La Crosse. Next we went to St. Francis Hospital, where they set the break and put on a cast that came up to my knee.

So, there I was with a broken leg and a near two year old. Somehow we got through the winter, but Lisa recalls me being in a wheel chair, and Sean being half way up the stairway, just grinning at me when I asked him, nicely, to come down… and grinning even bigger when I demanded that he come down right now! It was a long winter!

6 thoughts on “Voices From the Farm: Not the Best of Times, Not the Worst of Times, but Wearing”