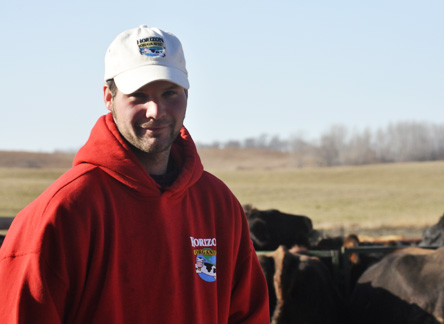 (Copyright by – and reprinted with permission from – Dairyland Peach, written by Emilie Thiessen)

Josh Wolbeck, who is new to the organic farming industry, stands by his herd of cows on his family’s farm outside of Sauk Centre. As of this fall, Wolbeck’s entire farm, including 223 acres of tillable land and 60 dairy cows, is certified organic. Wolbeck hopes the transition will provide a more stable income for him as the market for conventional milk continues to fluctuate.

Transitioning to a full-fledged organic farm took time for Sauk Centre resident Josh Wolbeck, but the process wasn’t what he expected.

“It was actually easier than they say it is,” he said. “Your main goal is to get the land organic first, then the cows. I was further than I thought I was initially, so that gave me a boost to start transitioning the cows.”

Wolbeck, who farms his family’s 223 acre dairy farm outside of Sauk Centre, said it took him three years to become fully organic from the time of his last documented use of synthetic fertilizers. His herd of cows, however, only required a one year transition period.

Wolbeck said the transition period went quickly — some of his land was already considered organic unbeknownst to him — and after his crop of corn, hay, soybeans and oats were organic, certification for the cows was a breeze. Wolbeck started selling his first batches of organic milk on Oct. 1, and felt a weight lifted off his shoulders right away.

“I think being organic is a lot less stressful,” he said.

Wolbeck started looking into organic farming when the market for conventional milk hit a low point three years ago. Wolbeck was concerned with the fluctuations in price, which he worried would be hard on the future of the farm.

“You can manage a $2 or $3 drop and be OK, but when you are talking $5, $6, $8 maybe even a $10 drop in price [per 100 pounds of milk], I don’t know of a business out there that can manage a drop like that,” Wolbeck said. “They take your paycheck and cut it by one third or one half, then tell you to become more efficient. Well, you got to get paid for what you do.”

Wolbeck now sells his milk to Horizon Dairy, the largest supplier of organic milk in the United States, and will go through yearly certification through the Midwest Organic Services Association. Wolbeck said with his recent contract with Horizon, he will be getting a minimum of $23 per 100 gallons of milk, and if the price of milk goes up, Wolbeck receives the difference. If the price of milk goes below $23, Wolbeck is still guaranteed that minimum.

“That is a really good incentive,” he said.

Wolbeck, who graduated from high school in Sauk Centre, said he would not have been able to get such a stable contract with conventional milk distributors. The Agricultural Marketing Service (AMS) announced that the price of Class I dairy (beverage milk) is $18.45 per 100 gallons in November, up from $15.20 in January. The break-even price for dairy farmers is rated at about $17.50.

Wolbeck said he couldn’t rely on such a volatile market at this time in his farming career. Because the demand for organic milk products continues to boom — AMS estimated August milk production was up only 2.1 percent from last year, while organic milk production for August was up 7.5 percent — Wolbeck felt the best, and in many cases, the only option for him was to go organic.

“I wanted to find something that would be more stable,” he said.

The results have been very satisfying. He said he is glad he made the decision to transition his entire farm to organic practices, including his crop land which ultimately feeds the cows. This, he said, is essential to making a decent profit off organic dairy cows.

“If you were doing organic dairy but had to buy the majority of feed, I don’t think you would be any better off,” he said. “But if you can raise most of your feed, then I think you will come out ahead.”

Wolbeck said a lot of people had questions for him when he made the decision to go organic, including his mother and father, Donna and Irvin, who now see the transition as positive progress for the family.

“Everyone thinks organic production is less,” he said. “People ask ‘How are you going to feed the world?’ My response is ‘First I have to feed myself, then I will feed the world.’ If I don’t get paid, I can’t feed the world.”

In terms of workload, Wolbeck said he definitely spends more time in the field keeping ahead of the weeds, but also doesn’t have to worry about the cost of fertilizers for the crops or antibiotics for the cows.

With conventional dairy, Wolbeck said he would spend $500 a month on veterinarian services for the cows. That bill is now no more than $100 a month.

“Health problems are kind of nonexistent,” he said.

Wolbeck said he sleeps easier at night knowing he is doing the cows, the environment and the consumers a favor.

“People disagree, but the synthetic chemicals we put on our crops, they do carry through — to the crop, to the silage, to the cow and to the milk,” Wolbeck said. “Every farmer farms the way they think is best, the way they think is right. I just think organic is right… this might be the harder way, but it is the right way.”