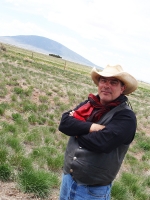 The Food and Agriculture Organization (FAO) of the United Nations has celebrated World Food Day on October 16, every year since 1945. It is a day to focus on agricultural food production, rural farmers – particularly women, the problem of hunger in the world, the rights of farm workers, food security, and food sovereignty.

At GoodFood World, we are celebrating World Food Day with an entire week of attention to the issues – local, regional, national, and global.

We offer the following interview with Devon Peña to highlight issues that are facing farmers across the US as well as around the world. Challenges like farm worker shortages – is it an immigration issue or worker welfare issue? Or corporate control by Big Ag, Big Food, and Big Org (as in organics)? Or commodity speculation by the world’s stock markets which is driving the cost of basic food stuffs beyond the reach of millions? Or factory farming that have mastered the “art” of growing and killing animals faster and on a larger scale than ever before? We’ll bring you information on all those issues this week, and we start with a “food commons.”

Building a productive commons of land, water and food

(Copyright by, and reproduced with permission from Cascadia Weekly. Read the original here.)

“When the history of the early 21st century is debated a hundred years hence, perhaps a central point of contention will be the variant forms used by capitalists to wage class war against other human beings,” notes Devon Peña. “The conflict between the few rich and the rest of us is ultimately about the politics of death, a sovereign ban on the life-sustaining activity of the unwanted.”

The response, he believes, is a focus on life—in particular the enduring elixir of earth and water mingling to produce food. Peña is a lifelong activist in the environmental justice and resilient agriculture movements, and is a professor of American Ethnic Studies, Anthropology, and Environmental Studies at the University of Washington. He is the founder of the Acequia Institute, a private non-profit organization dedicated to protect and promote acequia farming communities of the Upper Rio Grande bioregion.

At its most basic, an acequia is a ditch or canal through which water is drawn from distant mountains to nourish arid lands. The name also describes the broad community of water users who benefit from the irrigation system, the Acequia, the community associations that govern members’ water usage, based on local precedents and traditions.

“But how are you addressing that hunger? How are you eating?

“The food sovereignty model argues that you have to look at other things,” he says. “One is that we are evolving. There is research being done with nutrition science and genomics that suggest that human bodies do co-evolve with their food source. People from different parts of the world have different ways of metabolizing food energy, different ways of integrating minerals and other components of their diet.

“There’s an old saying about that—awareness of this has endured much longer than genomics—you are what you eat.”

Yet humans, he argues, hunger for more than food. They are nourished by community and culture.

For the peoples of Mesoamerica, watered by the acequia, the heritage cuisine is the Three Sisters—corn, beans and squash.

“You don’t just grown corn, beans and squash in a monoculture or plantation society,” Peña observes. “There has to be something more elemental involved, including how we manage biodiversity to maintain the soil ecology—what advocates today call ‘biodynamics.’”

Biodynamic agriculture is an approach to organic farming that treats farms as unified and individual organisms, emphasizing balance among native soil, plants and animals to create a self-nourishing system.

This is nothing new, Peña notes. It is, in fact, something very old.

“I have spent the last three years trying to understand what is really very ancient ethno-ecological, or ethno-agroecological knowledge. And I’ve come to understand what I believe are the most important aspects of this paradigm, one of which is diversity is a key to resilience. Second, an effort to build a solidarity economy instead of a predatory economy.”

A solidarity economy, he explains, arises spontaneously from resilient, reliant communities. Its emphasis is to sustain and nourish, not to extract profit. Its cycle is seasonal, not quarterly.

Peña’s charitable foundation both studies and supports Acequias around the Southwest. Most famous of these is a 14-acre community garden at 41st and Alameda in South Central Los Angeles, the largest of its kind in the United States. Started as a form of healing after the devastating L.A. riots in 1992, the South Central Farmers have since created a miracle in one of the country’s most blighted neighborhoods. But now, bulldozers are poised to level their 14-acre oasis, as development pressures begin to overwhelm the Acequia.

“Our work has focused on problems we’ve come to understand,” Peña explains, “one of which is that as a result of NAFTA and other Neoliberal globalization policies, there are 2 to 3 million indigenous Mesoamerican farmers that have been displaced from Mexico. A lot of them—rather than just lying down by the roadside and dying, starving—came here, in a wonderful meeting of people that is part of the Mesoamerican diaspora.

“What I’ve done,” he explains “is put limited philanthropic resources at their disposal to help rebuild the South Central farm outside of Bakersfield and to continue to work with the agroecological and ethnobotanical knowledge these diaspora farmers brought with them. Making sure that knowledge doesn’t disappear—making sure the seed saving doesn’t disappear—and preserving these very important traditions.”

The Three Sisters—corn, beans and squash—are no longer being grown in Chiapas or Oaxaca, displaced by sprawling corporate farms. They are instead, Peña notes, being grown by indigenous farmers in the United States and Canada, as far north as Bristol, Alaska.

“All of this indicates of a sort of inadvertent, unplanned but inevitable process of globalization from below,” he notes.

What ties them together is the Acequia, the water commons, the water democracy, not only a physical place where food is produced, and consumed, but it is also a social space where decisions are made in the interest of the common good. It is a space in which people—not corporations—decide.

“What I see in common from the Acequias of the south-central farm and in Colorado, and even in agricultural communities in Bellingham [Washington] through the land trust model, are institutions of collective action,” Peña says. “Collective action promotes local participatory democracy, it seeks to address people’s basic biopolitical needs—and by that I mean food, shelter, and community.

“They all approach this through the same basic paradigm—which no one has tried to declare in a manifesto of some kind—this fundamental idea of mutual reliance, cooperative labor and mutual aid as an economy that underlies our basic communities and food systems.”

“Little by little, the different experiences of community gardens, fair trade, community service agriculture, food policy councils, land trusts, farmer’s movements and consumer movements are slowly converging in their efforts to build a better food system,” writes Eric Holt-Giménez, executive director of FoodFirst/Institute for Food and Development Policy. He is the author of Food Rebellions! Crisis and the Hunger for Justice.

“These experiences do not necessarily use ‘food commons’ as their organizing concept, but to the extent that they bring parts of the food system into the public, rather than the corporate sphere, they are indeed constructing a dimension of a food commons.”

“We all face the same issues, wherever we are coming from,” Peña stresses,“ whether an acequia farmer in east Los Angeles or a farmer east of Bellingham—issues of self-governance, access to land and water, questions of how you rebuild not just a local healthy food system but heritage cuisines.

“What all of this amounts to really is green jobs,” he says, and they require no permission or policy to create.

“Get your shovels out and start digging a garden with your neighbors,” Peña says. “Get out on the streets and join the protests. Occupy the citadels of constituted power, the capitol buildings, legislator hallways, town halls and, yes, the banks and corporate headquarters.

“This is not rocket science; it is class war.”