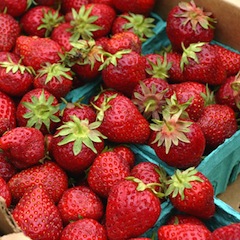 Growing good food is a noble profession, and small and moderate-sized growers are being challenged every day.

The E. coli outbreak reported yesterday (August 8) linked to Oregon-grown strawberries shows how food safety is a becoming a problem for local growers. E. coli is a bacterial pathogen that acts fast and is deadly to a comparatively few people, mostly the very young and those with impaired immune systems. It has been reported that as many as 16 people have been sickened by eating the strawberries grown on a 35-acre farm, Jaquith Strawberry Farm located in rural northwest Oregon, and 1 elderly woman has died.

While an outbreak can be relatively quickly identified and makes the news, tracing the source and cause of contamination can be difficult. This is especially hard when the producer sold the berries to buyers who then distributed them to roadside stands and farmers markets in five counties.

As for the source of the bacteria, the leading suspects are the local deer population. The E. coli strain identified as the cause of the illnesses is carried by certain animals – including deer – that can contaminate food and water with their feces.  Deer tracks and deer feces were noted in several strawberry fields at the farm suspected as the source, according to Oregon health investigators.

Deer have become overpopulated in agricultural regions throughout the US, and have become pests, carry diseases, and are extensively mismanaged. Further, many of the problems with pathogens on small farms have to do with the gross ecological imbalances brought by industrialization – and urbanization. Frequently, these external impacts are not accounted for when assessing blame and damages. The responsibility for control is disproportionally placed on the small farmer.

Contamination with E. coli is a rare occurrence, in fact, this outbreak is the first in the country to be traced to strawberries. When we focus on pathogen outbreaks, we lose sight of a continuing problem that seldom gets the attention it deserves – pesticide poisoning.

Weeds, insect pests, and disease can make commercial production of strawberries challenging; to prevent crop loss growers apply a variety of chemical pesticides: herbicides, insecticides, and fungicides. The intensive and often unrestricted chemical use on commercial strawberries has a broader and more long-term effect on people and the environment, often poisoning indiscriminately; farm workers are affected unmercifully and the effects are seldom reported.

Farmers are becoming increasingly dependent on these chemicals despite evidence that exposure to pesticides through food consumption or fieldwork is extremely harmful to humans. It’s the use of pesticides that gives strawberries the #3 place on the Environmental Working Group’s Dirty Dozen list of fruits and vegetables.

Those chemicals are not just exposing adult farm workers to health problems resulting from pesticide exposure, child workers as young as six are facing life-long health problems. Last week (August 5), three Washington farms were fined $73,000 for employing under-aged workers. Child labor is a recurring problem in farms in southwest Washington, where many farmers underpay their workers, leading families to bring their children to help pick.

How can you ensure that your strawberries will not make you or farm workers sick?

Independent small food operators need to work that much harder to be safe because they get an unfair share of the responsibility and a disproportionate amount of the blame, while large industrial operations often get a “slap on the wrist” when food safety failures are identified and traced back to them.

A better society would place the burden of responsibility on the factory operations and use the proceeds – in money and research – to assist the small growers and local distributors in dealing with the ubiquitous breakdown of natural systems and the associated disruption of ecological balance.