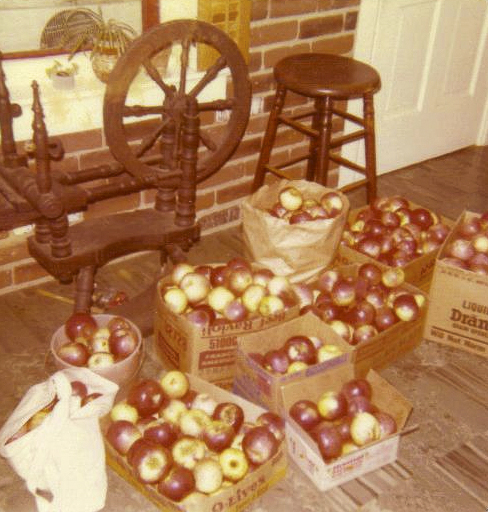 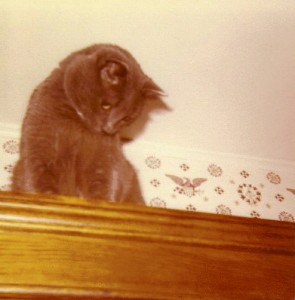 By June, it was time to take “Cat” to the vet to be neutered, so he would not be straying from home. Slowly, perhaps, we were learning to avoid some of the pitfalls that come with having a menagerie.

The gardens were bountiful and through July and August I was busy putting up the fruits of our labor so we could enjoy them through the winter months. At last all the canning jars were full and the freezer as well. When the first frosts threatened in September, I picked all the green tomatoes that were left on the vines and stored them on shelves in the cool basement. They could continue to ripen slowly and we could eat fresh tomatoes up into late fall.

We had not yet reached the threshold where we could bring ourselves to eat our own lambs. Hypocrites that we were, we marketed the ram lambs, from the past spring, to Wilson & Co. at Albert Lea, MN.

During WWII, Jerry had been treated to mutton chops, done to a nasty turn by army cooks, and swore he would never eat lamb. In due time he learned that lamb and mutton were not synonymous, and he eventually  became one of lambs’ biggest boosters!

We did not have our own hay for our sheep, as our crop land was rented out, so we had to buy our hay for the winter. When two wagon loads of hay were purchased, and safely stacked in the hay mow, we felt we were ready to face the winter ahead. The hay, plus a small amount of grain, which would be added to the ewes’ diet pre-lambing, would get them through to spring in good shape.

So, by the end of September, the heavy lifting was done, and I could begin to have some free time… except that I saw an ad that apple pickers were needed for the bumper apple crop in nearby La Crescent.  I was no stranger to apple picking, having grown up on my Grandpa’s farm, where he had a lovely orchard of more than a hundred trees, and many varieties of apples.

One of his favorite times of the year was getting his apples, plums, and grapes ready for the County Fair. We polished apples for days in preparation for the big event.

Grandpa had a friendly feud going with another orchardist whom he referred to as “Old Jones.” I don’t know why he was “Old” Jones, since they were both of about the same vintage, but that’s the way it was. At the end of the fair, Grandpa was in possession of 30 or more First Prize awards, and chuckling because he’d beaten Old Jones again! And it was another good year! 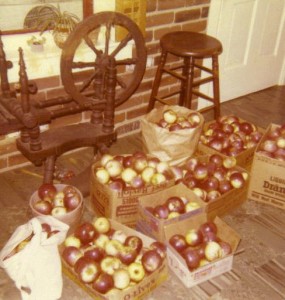 By October. I was happily apple picking at a lovely orchard in La Crescent. One of my close neighbors, whom I hadn’t known before, was also picking, so we shared rides and driving, and became great friends… which we still are, to this day!

I had been delighted when the apple picking job came along, as I wanted to get an automatic washer. I was getting a bit weary of dragging my old Maytag wringer washer out of the pantry and over to the double kitchen sinks. Besides that, I was going to need a new ram for the coming year and, of course, there was always the fencing fund to consider.

We had so much fun picking apples that it hardly seemed like a job, except for carrying those heavy, long, wooden ladders from one part of the orchard to another part. That was hard! But other than that it was joyful work.

In October, the view from the hills high above the Mississippi River was absolutely gorgeous, with the brilliant blue sky and the fall colors in their full glory. It was a scene to cherish and enjoy every day! Also, there was such a nice group of people picking.

There  were pickers from Spring Grove that I hadn’t met  before, and some of those also became life long friends. There were some “hippies” who were fun and interesting. One girl and her husband had a big tent and they camped in the orchard. She was very pregnant, so she picked from the ground and did not climb.

Neither my friend nor I ever fell out of a tree, but one day we heard a loud crash, branches breaking, and a scream! We thought someone was probably killed, but outside of a few scratches and a bruise or two, the lady was alright.

She didn’t have her ladder up straight in the tree, and as it leaned into the branches, the weight of the ladder, along with her weight, caused the branches to give way, and she rode her ladder right through the tree all the way to the ground. The Orchard Boss was very fussy about ladders being straight… not leaning! It took some getting used to, as it felt like the ladder was going to go over backward and take you with it. It was something of a balancing act!

Of course when the lady fell through the tree it caused a lot of fallen and bruised apples. We hurriedly picked them up, and everyone took some home to be made into pies, crisps, apple pie bars, etc. Every day when we broke for lunch, it was amazing.the variety of apple treats that were produced and brought along each day. Everybody brought enough to share, so everyone could sample and taste all the goodies… it was a desert lovers’ feast!

We picked into November. Some mornings, if there had been frost over night, the picking had to be delayed until the frost left the apples, otherwise they would bruise when they were picked. Eventually, the weather became too cold, but most of the apples were picked by that time, so it was a very successful harvest that year.

A big event of that fall was a meeting of a group of neighbors to decide whether to continue to have our neighbor-owned party line  phone system, which worked more or less (mostly less), but was cheap, or convert to a bona fide phone system. I was all for the new system, but Jerry was just as committed to keeping the old system as I was to getting rid of it. Luckily for me, when it came to a vote, only Jerry and one other recalcitrant voted “Nay” and the “Ayes” had it! We would be getting a new phone system installed. Amen!

The ram was put in with the ewes in November, so we would be having lambs in April. I was happy we had a good amount of hay in the barn to get us through the winter and the lambing season.  We also had purchased a jeep with a snow plow on the front, which we hoped would help us come through the winter in good shape.

2 thoughts on “Voices From the Farm: Gardening, Marketing and Apple Picking”