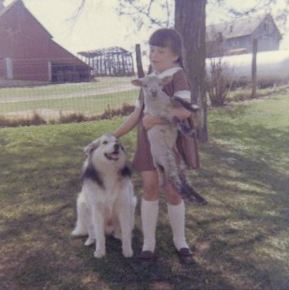 By February 28, there was still no snow on the ground.  We’d had only only a few light skiffs of snow thus far in the winter, the ground was bare almost all of the time. We had never had our driveway plowed!  By this time the previous year, we had been plowed out a total of nine times!

It may have been a relief not having to battle the snow all winter, but according to my journals of that year, we were quite depressed with all the monotony… it didn’t rain, it didn’t snow, the sun didn’t shine, the wind didn’t blow.  It was just “Blah!” We were very tired of it all, and anxious for spring.

Thankfully, we were blessed with a very early spring!  March and April brought lots of beautiful spring weather.  All the birds were returning early, the bluebirds built a nest in the stump below the hedge again, all the spring bulbs were up, and the crocus were ready to burst into bloom.

Early one April morning, Lisa was up and looking out her bedroom window, which was the first thing she did every day, to see what new thing might be blooming in the flower beds, or what other fascinating thing might be going on in the world.  She spied Grey Brother going down the driveway to check out something across the fence in the neighbor’s field.  After she alerted Jerry and I, we all  gathered in front of our big bay window in the living room, and we could see something moving in the field.

Jerry went outdoors, and he could hear geese honking, so we got out the binoculars,  then were able to tell that it was a flock of Greater Canada Geese.  They were enjoying themselves in the corn stubble of the previous fall, and they stayed there all morning, even when Jerry and Lisa left in the VW on their way to school and work  When Jerry came home for lunch at noon, the geese had moved and were resting on the bank above the neighbor’s pond. They were still there when he went back to work, but sometime during the afternoon, they moved on. The sight of all those big, beautiful birds in the corn stubble is still fresh in my mind to this day.

Lambing went fairly well, although two of the yearling ewes did not conceive. We didn’t lose any lambs, but we did end up with three bottle lambs. One was from a set of triplets, the second was a weak twin born during a cold snap, and brought into the house to save it, and the third was a twin from a  ewe with only one teat. This was thanks to an inept sheep shearer in a  previous year, who managed to shear off one teat on a maiden ewe.  Consequently, thereafter she could only feed one lamb.

The windbreak trees were due to arrive during the week, and I was already in the swing of things, as I had planted fifteen seedling trees along the South side of our driveway… five each of wild plum, crab apple, and choke cherry.  This would make for a colorful drive in future springs, and furnish lots of fruit for birds and other wildlife.

Now, it was time to plant the last 500 windbreak trees. It didn’t seem like such a huge job when I thought back to the 1000 trees I was planting in 1965, and hopefully, no interruptions such as there were in that first year, when I heard our old fox terrier, Zip, start barking.

At first, I hadn’t thought much of it, as she was a confirmed barker, but when it went on and on, I thought I had better investigate. I ran down to the house, quite a jaunt, and when I entered the kitchen, I found the floor covered with corn meal. The barking was coming from upstairs, and when I opened the stairway door there was a trail of cornmeal going up the stairs, down the hallway, and leading right to the door of Lisa’s bedroom.

When I opened the door, more cornmeal, Zip was under the bed still barking, the empty cornmeal container was lying nearby, and my sweet, gentle child was standing there, unconcerned, in the midst of all this havoc!  Of course, this led to her being confined to her room for the rest of the day, or at least until her Dad came home and took pity on the poor little thing, and let her out.

I was too mad to allow for any pity, and cleaning up the mess didn’t help my ill humor one bit!  Besides that, I had to go back to planting trees and try to make up for lost time!

One thought on “Voices From the Farm: A Strange Winter for Minnesota – No Snow!”