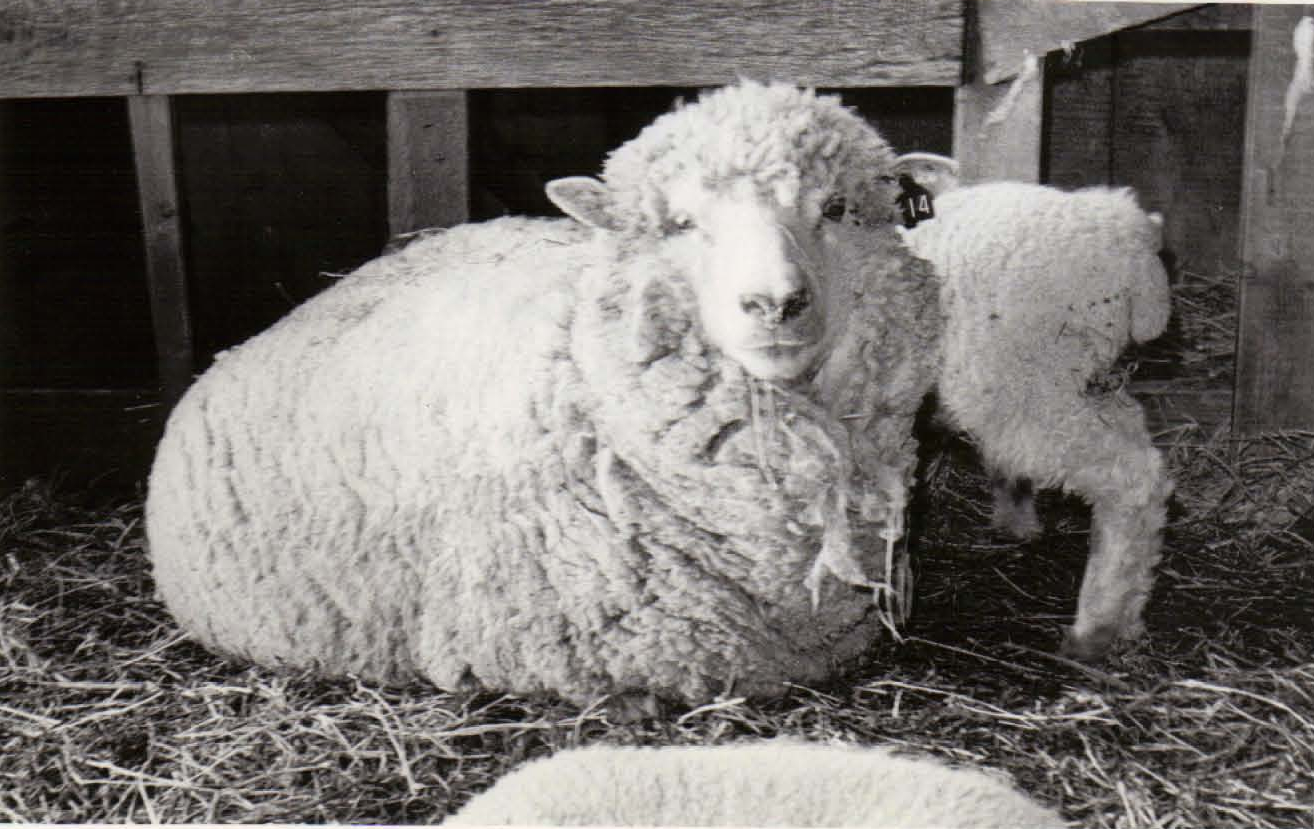 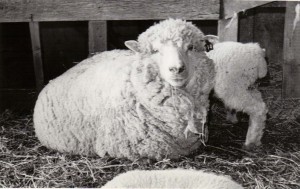 Early April, and we were on “pins and needles” awaiting the birth of our first lambs.  Even Jerry had joined the “expectant” group, but we did not really know what to “expect” from our two ewes.  We had no background information on them, other than that Mama was the “old ewe,” and came to us with only one lamb.  Whether she had only a single, or had given birth to twins, and only one survived, we had no idea.  Sure to Go, being only a year old, we expected it likely she’d have only one lamb.

After many fruitless barn checks, I went out early one morning and found Sure to Go just starting into labor. I alerted Jerry and Lisa.  Jerry decided his welding shop could open a little late that morning.  We all gathered quietly in the barn to await the outcome.  However, it was a long drawn out labor, and we became increasingly nervous at the slow progress.  After an hour of pawing, lying down, getting up, pawing, lying down, straining, and grunting from Sure to Go, at last a water bag appeared.  Jerry, despite five years as a soldier in WW II, and another year in the Korean War, still had a fairly weak stomach when it came to birthing.  He’d had enough, and left.  The two midwives staunchly remained.

After another half hour, the points of one hoof appeared, then more straining, getting up, lying down, and another hoof could be seen.  The points of both hooves were upward, which meant these were front feet, and the lamb was in correct position, coming head first.  If the points of the hooves were downward, it would have meant these were hind feet, and a lamb was being presented backward. Not an impossible birth, but a little more complicated.

However, we were not dealing with that, and soon a nose appeared right behind the hooves. More straining and pushing and the lamb’s head made its’ appearance, and finally the shoulders were through.  Then Sure to Go stood up, and the lamb dropped to the barn floor.  Sure to Go turned quickly and began to lick the lamb’s nose and mouth to remove remnants of its water sack, and excess liquids and mucous, so the lamb could breathe freely.  She took her time cleaning the lamb and we did not interfere, as this was part of their bonding, as well as drying off the lamb.  Soon the lamb was attempting to get to its’ feet and, after several false starts, made it up and took a few staggering steps searching for the udder.

With much nudging and encouragement from Sure to Go, the lamb at last made contact with the teat and began to nurse.  This first milk, called colostrum, which is full of energy and anti-bodies, gives a lamb a good start in life.  Soon, Sure to Go moved away from the lamb and began pawing.  Another lamb was on the way!

The birth of the second lamb did not take quite so long as the first.  Sure to Go had a pair of beautiful twins, a male and a female, unassisted!  We were overjoyed, and Lisa soon named them Seth, and Sheba. We left them undisturbed  to finish their bonding, and meanwhile we set up a lambing pen, also known as a “jug.”  This was so the new mother and her lambs could  be penned together for a couple days without outside interference, or getting separated from each other. A little later, after Sure to Go had passed the “after births,” we put the new family in their pen, gave Sure to Go a nice big flake of hay, and a bucket of water.  I trimmed the lambs’ umbilical cords, then dipped the ends in a container of iodine to help them dry up, and prohibit the entrance of organisms that can cause problems.

4 thoughts on “Voices From the Farm: The First Lambs Are Born”