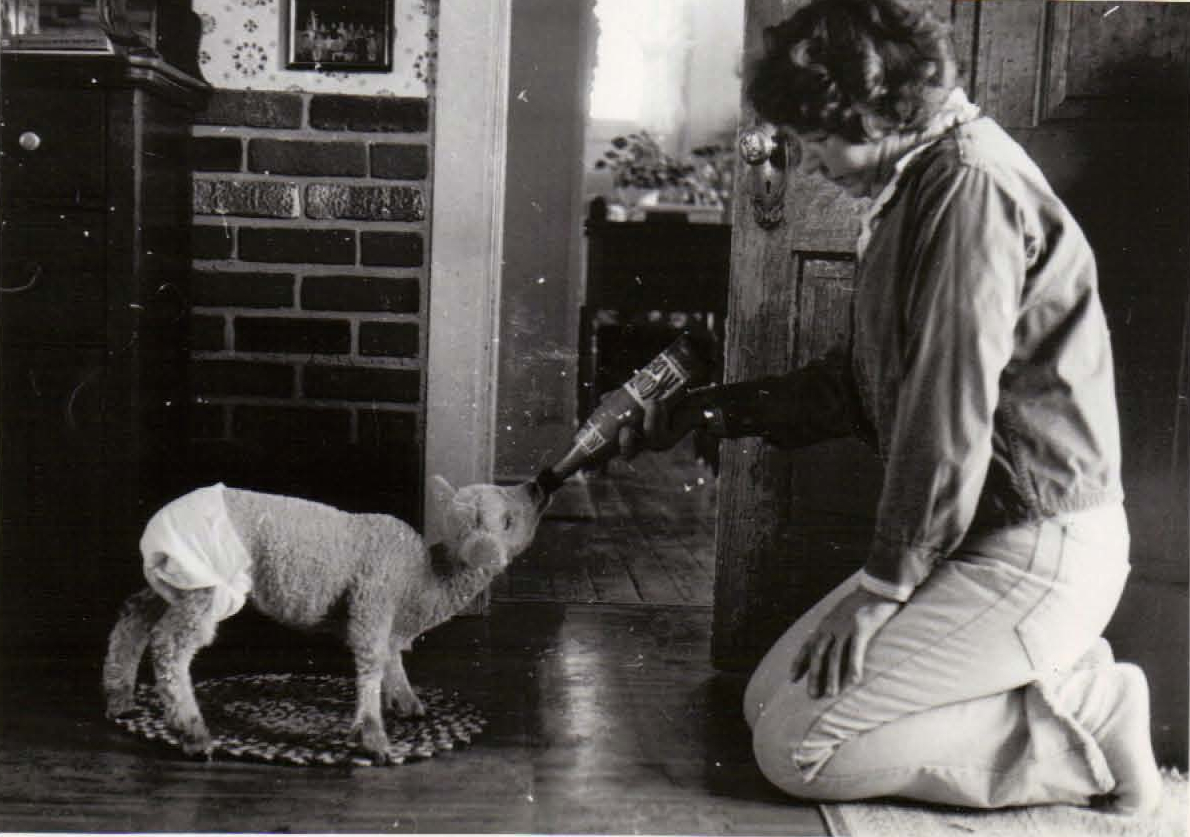 The morning after Mama’s lambs were born we arose early and went to check on our sheep.  We found we were not so lucky after all. Mama had decided that she only had one lamb, and had totally rejected the little male.  When he came near her, she bunted him away.  He, of course, kept trying to nurse each time his sister nursed, but Mama would whirl and butt him with her head.  I decided to tie her to the manger, so she could eat hay, but could not turn her head to bunt him.  She didn’t like this much, but I gave her some hay and brought her a bucket of water, which she drank, and soon she began to munch the hay.  I thought she seemed to have calmed down, so I was somewhat hopeful that whatever possessed her had passed.  Maybe she was going to be okay, but I stayed nearby to keep an eye on her.

Soon the little ewe lamb, who had been named Sabrina, began to nurse.  This signaled the male, who we called Little Bit, to try to nurse again, but Mama would not have it!  She could not bunt him, but she swung her hips around, knocking him over, and then did her best to stomp on him.  She repeated this tactic every time he came near her.  Finally, I got a hay bale and set it on her left side. I brought the lamb to her right side, and while I put my knee and shoulder into her body and pushed her against the hay bale, Little Bit managed to get a drink… but not for long.  She could still move her right hind leg forward and knock him away from the teat. This struggle went on for most of the morning, with the lamb getting a little milk each time, but not enough. 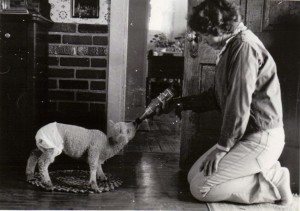 I knew from my experiences in raising bottle lambs as a child, that a ewe sometimes had no milk, or might  disown a lamb, so I was prepared.  I had gotten a few lamb nipples when I  purchased my lambing supplies, so I went to the house, got a pop bottle, nipple, and a container to milk into, and returned to the barn.  I knelt next to Mama and milked some milk into the container, then transferred it to the pop bottle.  I put the nipple on and offered the bottle to the hungry lamb.

Of course, he had nursed on his mother’s teat enough to know that this thing was not his mother’s teat, and he didn’t like the feel of it.  After quite a few attempts, he did get enough taste of the milk to realize it was good, and he was hungry. He started to suck greedily until all the milk was gone, only about 2 ounces, as a new lamb’s stomach can’t hold very much at one time, and they need to be fed quite often. Once he was taking the bottle well, I gave both lambs their shots, and docked their tails, but we left Little Bit as an intact male.

We kept up the attempts to make Mama nurse him, but always had to wind up milking her, and feeding him from the bottle to keep him fed and growing.  He soon caught on that when I came to the barn, I would push her against the hay bale and make her nurse him. At the sight of me, he would be right there ready to nurse.  At least he was getting his mother’s milk and getting off to a good start, but this was very time consuming.

At the end of a week, I was also tired of fighting with Mama, who showed no sign of relenting, and I decided it was time for me to throw in the towel and put Little Bit on lamb milk replacer.  By then he was able to drink more at each feeding, and only needed 4 feedings a day.  In another week he could go to 3 feedings a day.  So Mama won the battle!  But, I was determined that, if she tried this gambit again in the future, she would lose the War!

I would have to make some alterations to the manger, a head gate of some sort, so she could not turn her head and see who was nursing, or smell the lambs.  There would be a pen around her, so the lambs would stay at her rear, be able to nurse, and in week or two they would smell just like her, and she would accept both of them. I would be prepared!

3 thoughts on “Voices From the Farm: The First Lambs Are Born (Part 3)”