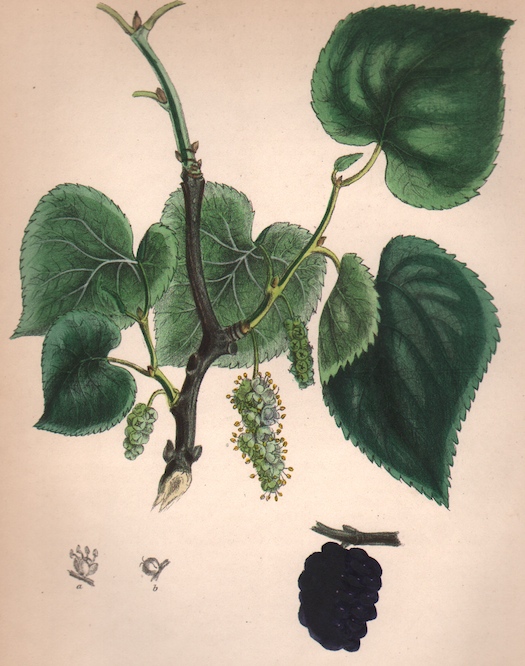 My favorite berry is black mulberry, because it is so delicious, and such a rare treat to eat in Seattle. I have requested that a black mulberry tree be planted on my grave.

Most people in Seattle have never eaten a black mulberry, simply because extremely few black mulberry trees exist in the city. Some of us have eaten mulberries that were black — but which came from other species of Morus.

For example, the common white mulberry tree, Morus alba, has berries that vary at maturity from white, pink, red, purple or black, and vary in size, too. Moreover, the “Illinois Everbearing” hybrid of Morus alba and Morus rubra ripens black mulberries (I wrote an article about it in 1990; read it here).

The original, pure black mulberry tree, Morus nigra, is unusual compared to most — if not all — other Morus species. Its chromosome count is astonishingly high (2n = 308)! It is almost certainly an ancient hybrid cultivar whose ancestral species are extinct. It has been cultivated for millennia and its original native locale is unknown — but likely central Asia.

Its English names, beside black mulberry, are Persian, Spanish, or common mulberry. It was introduced to the British Isles by 1548 if not earlier. It was being offered in North American nurseries by 1771, but is still rare here. In most parts of this continent it is ill-suited. Much of the interior is too cold; much of the Southeast too hot and humid. On the Pacific Coast from B.C. through California it thrives. But few specimens exist.

As an ornamental species its role is modest. It utterly lacks floral beauty. Its fall color is a late, ordinary yellow. The summer foliage is darkest green, dense and inelegant. When the ripening fruit is red it is pretty; when the fruit turns black and drops, staining the ground most messily, there is no joy. And, as usually seen these days, when black mulberry is grafted up on a trunk of a white mulberry, the result is a crude-looking unnatural freak.

But! To eat the fully ripe berries is a sensual foretaste of the delights of heaven.

The black mulberry’s fruit is the connoisseur’s choice. All mulberries are eaten mostly by birds and children. They ripen a few at a time, must be picked daily, and are so plump with juice and so soft and tender that conveying any to markets is awkward.

Therefore, if you desire to eat mulberries you must either grow your own or know of a tree nearby. And if you can grow enough to take weekly to local markets, they will fetch premium prices.

I here quote from John Loudon‘s 1883 Trees and Shrubs, an English book:

“The tree will grow in almost any soil or situation that is tolerably dry, and in any climate not much colder than that of London. It is very easily propagated by truncheons or pieces of branches, 8 or 9 feet in length, and of any thickness, being planted half their depth in tolerably good soil; when they will bear fruit in the following year.

Every part of the root, trunk, boughs, and branches may be turned into plants by separation: the small shoots, or spray, and the small roots, being made into cuttings; the large shoots into stakes; the arms into truncheons; and the trunk, stool, and roots being cut into fragments, leaving a portion of the bark on each.” (page 707).

If this ease of own-root propagation holds true, then why are virtually all the trees currently sold in Washington grafted on white mulberry trunks? I suspect it is because the propagator gets a faster turnover; it is easier to do. My concern is that the grafted trees look ugly, and there may well be delayed graft incompatibility. All the very old Morus nigra trees I have seen on the Pacific Coast are own-root.

You can grow an isolated black mulberry tree and get ripe berries. It has both male and female flowers, is wind-pollinated and self-fertile. It tends to be slow growing, putting much energy into fruit. I bought a small grafted specimen in 2000 and it finally bore fruit this year (2009).

John Gerard described the berries in his 1593 Herbal:

“The fruit is long, made up of a number of little graines, like unto a black-Berrie, but thicker, longer, and much greater, at the first greene, and when it is ripe blacke, yet is the juyce (whereof it is full) red.”

Though mulberries look like blackberries, the nearest plant genus to Morus is Ficus.

The fruit is only to be eaten when fully ripe: dark, very plump, soft and juicy, readily falling off the tree. In Seattle that means late June at earliest, more likely mid-July into October. Unripe berries can be harmful. The berries are rich in vitamin C, potassium, iron, and antioxidant anthocyanins.

Some cultivars that are thought to be Morus nigra are: Black Beauty, Chelsea, Jerusalem, Kaester, King James the 1st, Noir of Spain. Various other named entities ascribed to this species are really from other species or hybrids — as far as I can determine.

Black Mulberry leaves — as my scan shows — are roundish overall, heart-shaped at their bases, on short stalks. They are lobed rarely. They are dark and semi-glossy above, paler and fuzzy beneath. They measure mostly 3 to 5 inches, up to at most 9 inches.

Authentic black mulberry trees have been measured over 50 feet tall, in London, but the vast majority are low, broad, and often the size of a small apple tree. Based on photographs I have seen, and its size, the so-called “National Champion” black mulberry tree, in Westminster, Carroll County, Maryland, is a White Mulberry tree (Morus alba L.). Since 1955 it has been misidentified thus. As of 1999 it was said to be 60 feet tall and 80 feet wide. In my own travels on the Pacific Coast, the largest black mulberry trees are around 30 feet tall and are often wider than tall.

Some botanists split these into separate species, but despite minute technical differences, their overall appearance and behavior is like that of white mulberry.

The black mulberry, compared to the white mulberry: is later to flush in spring, holds its leaves later in fall, has thicker leaves on shorter stalks, is bisexual, is notably hairy, has more milky sap, is only a small tree, invariably has black berries, is less cold-hardy, and its berries taste better to most people.

Red Mulberry (Morus rubra L). is native in the eastern half of the United States, and requires a continental climate to thrive, so is a flop in Seattle.