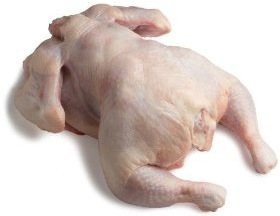 Our food system is definitely bottoms up! Animal agriculture consumes 80% of all antibiotics used in the US and yet our meat is covered with infectious bacteria.

According to a study published in the April 15 issue of the journal Clinical Infections Diseases, 47% of meat sampled contained strains of Staphylococcus aureus, and more than half of those bacteria were resistant to at least 3 classes of antibiotics . The research was conducted by the Translational Genomics Research Institute (TGen) and funded by the Pew Charitable Trusts.

This is the first national assessment of antibiotic resistant S. aureus in the U.S. food supply. And, DNA testing suggests that the food animals themselves were the major source of contamination.

The American Meat Institute is contesting the findings and says that Federal data show that our meat supply is safe.

Food safety attorney, Bill Marler, funded his own series of tests through the Institute for Environmental Health and found that 100 chickens purchased in the Seattle market produced somewhat similar results. Test revealed 42% of the samples contained S. aureas, while only (!) 10% showed the presence of multidrug-resistant S. aureus (MRSA). Marler’s testing showed that organic chickens were slightly less likely to carry Staph bacteria; 3 of the 13 organic chickens (23%) tested were positive for Staph.

Earlier this year Canada’s CBC TV found 2/3 of samples collected at major grocery stores in Vancouver, Toronto, and Montreal had bacteria resistant to at least one antibiotic.

“This says that raw chicken in our grocery stores is far less sanitary than we think.” (Bill Marler, Marler Clark)

What can consumers do?

Although Staph should be killed with proper cooking, it may still pose a risk to consumers through improper food handling and cross-contamination in the kitchen.

Cook poultry to an internal temperature of 165 degrees (that’s higher than most of us consider “done”) and be careful of cross contamination. Raw poultry can contaminate shopping carts, checkout counter conveyor belts, and kitchen cutting boards and utensils. Food handlers can contaminate uncooked foods such as salads if they don’t wash their hands and take other precautions when working with raw poultry.

LA Times: Almost half of meat in stores may have drug-resistant bacteria