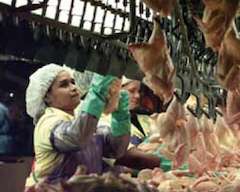 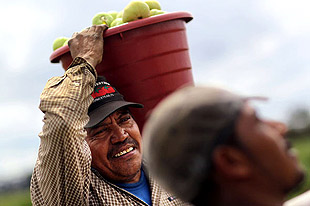 The “Good Food Movement” is a reaction to the global food system. Like much of our economy, food production is dominated by large corporations and industrial food processes, and consumers are looking for a sustainable food system. More and more, consumers are buying produce in a farmers market, supporting an urban farm through community supported agriculture, or even growing or foraging backyard fruits and vegetables.

The conventional food chain provides work for millions of people, in production, processing, distribution, and preparation. The future of good food cannot ignore these workers. People of color are often limited to low-wage service and production jobs, and at least 6 out of 10 farmworkers is undocumented.

Many sectors of the food chain are excluded from the protection of federal labor laws, including farmworkers, tipped minimum wage workers in restaurants, and the formerly incarcerated. Many lack the right to organize without retaliation.

According to The Color of Food, a report prepared by the Applied Research Center, the median wage across the food chain is $11.5 an hour, and 12% of food workers live at the federal poverty threshold. In the food system, 25.6% of workers are Latino and 10.4% are black. Latinos make up 65.5% of agricultural workers, 83.8% of graders and sorters, 58.3% of poultry, meat, and fish processing workers, 70.4% of food packers and packagers, and 23.1% of food service workers – primarily in food prep and fast food.

In response to lack of data about farmworkers’ employment prompted the Bon Appétit Foundation to fund an Inventory of Farmworker Issues and Protections in the US. Key findings from the inventory are:

The primary issues affecting US farmworkers today are:

While neither report separated the data by gender, Injustice on Our Plates – Immigrant Women in the US Food Industry documented examples of each of the primary issues identified in the Inventory with case studies and personal stories. The report closes with:

Not much has changed in the 50 years since Edward R. Murrow exposed the plight of migrant workers in the documentary “Harvest of Shame.” What has changed is that the majority of farmworkers are now undocumented immigrants, making them in many ways even more vulnerable to exploitation. As Murrow said, they have the strength to harvest our fruits and vegetables but no power to influence the laws and regulations that can improve their lives. That part is up to us – the beneficiaries of their labor. 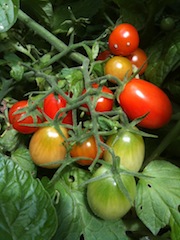 In some segments of the food industry, food workers are taking control of their own destinies. The Coalition of Immokalee Workers (CIW), a community-based worker organization, whose members are largely Latino, Haitian, and Mayan Indian immigrants working in low-wage jobs throughout the state of Florida, launched an initiative in 2001 that ultimately became known as “One Penny More“ to increase the wages of tomato pickers.

In November 2010, the Coalition of Immokalee Workers (CIW) and the Florida Tomato Growers Exchange (FTGE) have reached an agreement that extended the CIW’s Fair Food principles – including a strict code of conduct, a cooperative complaint resolution system, a participatory health and safety program, and a worker-to-worker education process – to over 90% of the Florida tomato industry.

The collaboration will unfold in a two-step process. For this season (2010-2011), participating FTGE members (see the complete list at the end of this release) have agreed to pass through the penny-per-pound from participating purchasers and cooperate with a financial audit of the penny-per-pound funds. They have also adopted the Fair Food Code of Conduct, which will be fully implemented by the beginning of the 2011-2012 season.

It’s a small first step, but steps like these will make a difference in the welfare of the hidden workers in our commercial – and, yes, even large scale organic – food production, processing, and delivery systems.