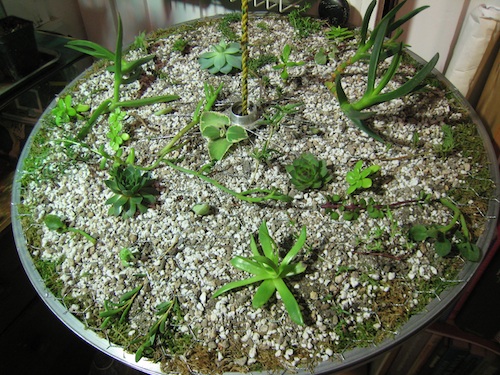 In February 2011, I took a damaged rear bicycle wheel, cleaned it of grime, and rigged it into a planter for succulents.

It recalls, in its shallow soil depth, and succulent plants, a miniature version of a rooftop garden. Except for the fact that some of the 27 kinds of plants placed on it are frost-tender, and so would be killed in a hard winter freeze, it could be kept outside in Seattle. For the time being, it is inside, lighted both from a southwest facing window, and a 160-watt wide-spectrum, self-ballasted incandescent lightbulb about 5 feet above it.

The bicycle wheel is an Araya, size 27 inch diameter by 1.25 inch thickness. The rim is likely aluminum, the spokes look to be steel. The freewheel is deadweight and I would advise to anyone else: remove it – or use a front wheel. I lack a Shimano freewheel-remover, so it is still on. To clean the wheel, I used isopropyl alcohol, paper towels, and a stiff brush.

Next I fitted onto the bottom side, metal-mesh, quarter-inch galvanized hardware cloth. Using tin snips, I cut the sheet into a circle, making a hole for the protruding freewheel and hub, and affixed this wire mesh to spokes using numerous little pieces of re-bar wire.

Then I went to my garden and gathered handfuls of pleurocarpous mosses and packed it between the upper side spokes and the wire mesh. I thought about buying sterile peat moss, or sterilizing my moss, but opted to try it as is, full of microscopic and some macroscopic creatures and soil particles. No professional nursery or greenhouse operation would dare use unsterilized moss as I did, because it can introduce nuisances such as worms, pests or diseases.

The purpose of the moss layer is twofold: it will help prevent the soil layer from filtering through the wire mesh screen; it can be misted with water spray to wick-up moisture intended for the plant roots. I could have used a sponge or foam layer that would have done the same thing, but desired to try living moss – risks and all.

A layer of potting soil was then sprinkled liberally atop the moss, like putting grated cheese atop a pizza. This potting soil was my own blend of “Cactus & Succulent Mix” from Fleetfoot & Foulweather; a few cups of finely ground dolomitic limestone; handfuls of Perlite; and a handful of Walt’s Organic Fertilizer (9-3-5).

Atop the potting soil mix, I affixed chicken wire mesh, cut in a circle just like the quarter-inch mesh on the bottom. The role of this chicken wire mesh is, when the succulent plants all establish an intertwined root system, then maybe I can hang the wheel on a fence without everything falling off. Also, it will make it that much harder for squirrels to dig in it, when I place it outside in summer. The chicken wire also had to be affixed to many spokes and the wire mesh at the bottom.

Using a rope that I guess is nylon, I suspended the planted wheel in my office, placing a large piece of cardboard underneath it to catch falling debris, that I sweep up occasionally and put back on top where it belongs.

Finally I planted it. This was the pleasant part. I plucked pieces of 27 kinds of succulents that I find edible, and laid or poked them gently atop the potting soil. It looks lovely. I assume most will adjust to their trauma, form a callus, and root. Some will almost certainly shrivel and die. Here is a list:

Were this to be an actual rooftop garden, then a lighter-weight soil mix would be needed, and presumably a great many more plant kinds used. In climates such as Seattle, with dry summers, appropriate plant choices are limited. Most cities have rainy summers, so can use a wider array of plants. Most Seattle rains come in winter when plants don’t need it. When plants are growing, between May and the end of August, Seattle averages only some 5 inches of rain – just like Rome.

[The Sedum album ‘Hillbrantii’ that I list above, may actually be Sedum Hillebrandii Fenzl, a species that some botanists place in synonymy with Sedum sexangulare L.]