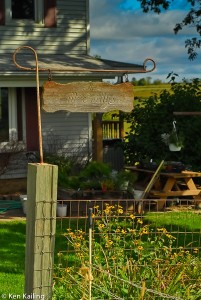 From the frozen hills of southeastern Minnesota, not far from the intersection of Minnesota, Wisconsin and Iowa, we got an email recently from Lea McEvilly, 84, shepherdess.

After nearly 46 years of raising and caring for as many as 300 sheep on 80 acres with just the help of her dogs for most of those years, Lea is selling her last remaining flock.

Letting go of a lifetime of farming is hard, here is how Lea came to the decision to sell her sheep – with a little help from her friends.

Before we hear from Lea, a few notes are in order: 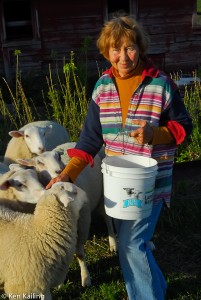 Here’s the news from Minnesota:

At least it is going to be warming up all week and by Friday we may have a THAW! It would be nice to see some of this snow shrink a little and give us a bit of a respite before the next blast.

As for me, I am beginning to feel like a “puppet master.” This past year has been strange. It began with my telling Sean, before lambing this year, that I was “programming” to have twice as many ewe lambs as ram lambs.

He smirked and said, “Good luck with that Mom!” Then came lambing and 14 ewe lambs were born – one was born dead – and only 6 ram lambs. Even better than the “twice as many!”

Then when I got thru’ the lambing, just as I was thinking I probably should sell my ewe flock because of my hip, in walks Jim S. He wanted to buy my ewes, my hay, and my feeders, etc.  So, I sold him my ewes.

But I kept enough equipment to be able to take care of my lambs, then sold some ram lambs, sent a couple to the locker, and kept one to breed the 12 ewe lambs last fall. (One ewe lamb went missing during the summer, but I wasn’t getting around well enough to search the north pasture to find out what had happened to her.)

Lately, I have been pondering whether to advertise the bred ewe lambs for sale in February or keep them and try to keep going one more year.  My head tells me this is the time to sell, as I’m sure I can get at least $215 each for them since sheep prices are through the roof. 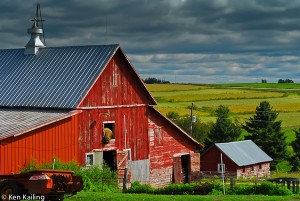 Also, most of the round bales in the hoop building are being used up this winter and there are probably only a hundred or so small bales left in the barn to cover lambing. If I kept the sheep we would need to restock everything.  And how much longer could I handle it? But of course, my heart tells me “go for it.”

In the meantime, I have been “puppeteering” Tom from Austin and Jim from Caledonia. Tom has an RR Hi-5 ram, “Eric,” that he bought from Catherine and Melissa’s flock and he had some Hi-5 ewes that he had purchased previously from Howard M, a neighbor of the afore-mentioned C&M; who had, of course, bought them from C&M; who bought their first 50 ewe lambs from me “way back when.”

So Tom has the makings of a pretty nice Hi-5 flock going, but now he needs to get a different ram for next fall, as he plans to keep all his ewe lambs and doesn’t want them bred by their own sire, Eric. On the other hand, he doesn’t want to give Eric up, because he is such an excellent ram, and has the RR genes, and Tom dearly loves him. 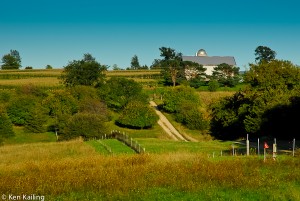 Tom doesn’t have facilities to run two separate flocks, as I used to do, so what to do? He’s emailing me asking for any ideas or suggestions I might have.

Next… Jim re-enters the story, and like Tom, he plans to keep all the ewe lamb he gets this spring. Jim also needs a different ram to breed them as they will be out of the purebred Texel ram he bought from me, along with the ewe flock.

Like Tom, he doesn’t have the facilities to run two separate flocks, but does not want to give up his Texel ram either.

Hmmm!  So, it occurs to me, “Why don’t they just trade rams for the next breeding season, and then trade back, and all their problems will be solved, for awhile at least, and everyone will be happy!”  So I broached this idea to both of them, and they thought it was a great idea. Jim rode with us to the Annual Southeast Minnesota Sheep Day on the 15th and Tom also attended so they got to meet, discuss the matter further, and everything is pretty well set.

Next… Tom emails that he just got called to take a job in St. Peter doing electrical construction, a job he had previously applied for, and he needs to take it in order to pay the bills.  However, it means 2 hours driving each way, and long work days, so he is afraid he won’t be able to watch his sheep during lambing as he is wont to do, and thinks he may not be able to keep them.  Again, do I have any suggestions?

Mulling this over, I think that maybe Jim would be interested in buying Tom’s flock if he needs to sell them, as Tom only has about 8 ewes, which would give Jim a total of 18 and he could handle that okay.  I call Jim, and yes, he is very interested… and I conveyed this to Tom, via email a few days ago.

However, now Jim is calling to hear what I’ve heard from Tom, but Tom is not responding, and I don’t know if he is just too busy, too tired, or just doesn’t know which way to jump. 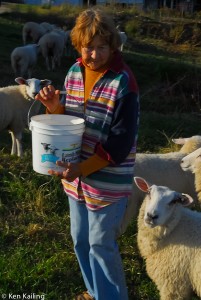 Jim calls today, wondering if I’ve heard from Tom… I haven’t. Jim has now talked with a guy from Iowa who is cutting down his flock and has some 5-year-old white face ewes for sale, so Jim is thinking of buying them, if Tom doesn’t want to sell.

The Iowa guy is asking $200 apiece for the ewes. Jim thinks that is a little steep, but I tell him, “No, it’s not.” I go on to say that I would be asking $215 apiece for my ewe lambs if I decide to sell them.  At this mention of selling my ewe lambs, I can almost hear Jim’s ears perking up, and he says, “You’re thinking of selling your ewe lambs?”

I explained my dilemma as to whether to sell them or keep them, and the likelihood of upcoming eye surgery, then possibly hip replacement, and he says, “Well, I’d be interested in them!  So if you decide to sell, keep me in mind!”

So, obviously, this is meant to be, and I will probably sell them to Jim, and he will take the rest of my hay, which I will no longer need, and the rest of my equipment.  And it is perfect for him, since he has been grandfathered into the Scrapie Free Program since he bought my Certified SFCP flock. My lambs are still certified so he wouldn’t lose his SFCP status, which he would if he bought someone else’s sheep that are not certified.

How’s that for a convoluted story?  Hope you paid attention to all the details, as there will be a quiz on this later!

Now, it is time to go out and feed the lambs their barley (which Jim will also buy, and probably the feed bin as well)!

2 thoughts on “Voices From the Farm: It’s All about Sheep!”