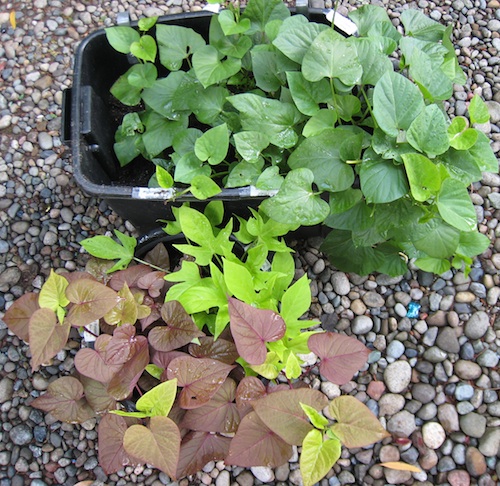 During 2010, I tried to grow sweet potatoes in Seattle.

Briefly summarized: I learned that cultivars vary immensely and that growing sweet potato plants for their edible leaves is well worthwhile; but for their swollen roots alone, I found them not worth space in a garden here.

The sweet potato is well known as a crop adapted to, and thriving in, warm and hot places. It is easy to grow there. Gardening books assign it USDA climate zones 9 through 12.

In terms of its cultural preferences, it has little in common with its unrelated namesake the common potato Solanum tuberosum L. The latter is in another plant family (Nightshade), requires little summer warmth, and its leaves are poisonous even cooked.

A nutrient comparison of the common or Irish potato, and the sweet potato, reveals that compared to common potatoes, sweet potatoes are higher in fat, lower in protein; higher in minerals; way higher in vitamin A.

About 650 species of Ipomoea exist, primarily in tropical and warm-temperate regions. The common sweet potato, Ipomoea Batatas, originated in Central America. Domestication occurred before 6,500 years ago. It is now grown globally wherever the climate permits and is especially prized in China.

The specific name batatas or batata dates from the 1500s –the Spanish name patata, from Carib [Haiti] batata (sweet potato). After the first voyage of Columbus in 1492, sweet potato was introduced to Europe.

Cultivars of Ipomoea batatas have been selected and grown for 3 main reasons:

Sweet potato leaves are hairless, often shiny, thick, variably shaped, and nutritious. They have milky juice. They grow on trailing, vine-like stems. Flowers are rarely seen in the North and appear late in the growing season.

Commonly in the United States, at Thanksgiving, people serve sweet potatoes, and call them yams. According to SweetPotato.org, “African slaves in the South called the sweet potato nyami because it reminded them of the starchy, edible tuber of that name that grew in their homeland. The Senegalese word nyami was eventually shortened to the word yam.”

Few residents of these states know that the leaves are also edible and highly nutritious. A 2006 article, Nutritive and Anti-nutritive Evaluation of Sweet Potatoes Leaves, points out “Its wide use as vegetable is however hampered by the fact that it is considered a poor man’s vegetable, coupled with the fact that it had always been used traditionally as feeds for domestic animals.”

“The leaves of Ipomoea batatas from the data, reveals that it contains an appreciable amount of proteins, minerals, fat, fibre, carbohydrate, caloric values (energy) and low levels of toxicants except for oxalate whose value can be reduced by cooking.”

I tried to grow in Seattle, this year, 10 sweet potato cultivars. Knowing that they require heat to yield well, and that Seattle is notably lacking in summer heat, I needed care. A.R. Kruckeberg’s 1995 book, The Natural History of Puget Sound Country, reports:

“Western Washington, where the sun just skirts the southern horizon in winter, has the lowest heat budget level of any place in the United States, outside Alaska.”

That is why it is difficult in Seattle to raise large crops of tomatoes, melons, peppers, eggplants, and the like.

Moreover, my garden is notably shady due to many trees. Therefore, to maximize my yield, I planted all the sweet potato starts in black plastic tubs, and as they grew, raised the level of compost, supplemented with fertilizer. The tubs were put in relatively sunny places, and watered amply.

The results? Of the 5 “ornamental” cultivars, Blackie, Margarita and Sweet Georgia Heart Purple all croaked as if they rotted; Sweet Caroline Light Green and Sweet Caroline Sweetheart Red made pretty, edible foliage, but no swollen roots. It should be mentioned that this 2010 spring and summer were unusually cool even for Seattle standards. This was a poor year, and my garden a poor site, to try a sweet potato experiment. Possibly I gave the plants too much nitrogen.

Of the 5 production cultivars, Centennial and O Henry died early; Bush Porto Rico made adequate greens but no thickened roots; Georgia Jet was a strong grower of good foliage, but no swollen roots. Beauregard alone made both good foliage and one plump root.

But that Beauregard grew a sweet potato – even in these difficult circumstances – is gratifying. Beauregard was released by the Louisiana Agricultural Experiment Station in 1987. It is the leading cultivar now in the United States.

Besides those ten, there are two more. In September I mail-ordered from Flora Exotica an unnamed cultivar in a small pot, and in October from Glasshouse Works a purple tuber clone. These two I shall grow overwinter as houseplants. Their leaves, cooked, shall feed me. I have enjoyed sweet potato leaves cooked via stir-fry, and used as one would spinach, added to pasta dishes or topping a vegetarian pizza.

How to cook my lone Beauregard potato is something to mull over.

2 thoughts on “Growing Sweet Potatoes in Seattle – Is It Possible?”