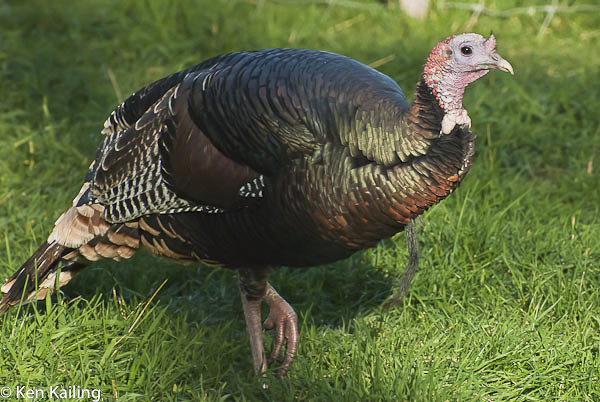 It’s dawn, it’s winter, and it’s cold in the forest. The snow squeaks and crunches underfoot. Ahead in the oaks are huge shadowy figures hunched on the bare branches. Crouched vulture-like are a dozen – no, two dozen – huge feathery masses. Approach closer and one by one they launch from their perches – up to 20 pounds of body mass and feathers – extending their wings in a 5-foot span to soar overhead,  feathers rustling in the branches.

Turkeys in the wild are sly, devious, and quite capable of fending for themselves in the climatic extremes of the “driftless area” of southern Wisconsin and Minnesota – the part that glaciers missed in the last ice age. In fact, across the country, wild turkeys have grown in number from about 30,000 birds in the 1930s to more than 6.5 million ranging coast to coast.

Around 25,000 heritage breed turkeys are raised on small farms and sold directly to consumers or through specialty markets. If you live in Wisconsin or Minnesota, you are more likely to have a wild turkey on your dinner table than a “heritage” breed: in 2009, more than 70,000 wild turkeys were killed during the states’ spring and fall hunting seasons. (1)(2)

Broad-breasted Whites – The Turkey for the American Table

Benjamin Franklin admired the wild turkey for its boldness and ability to forage for itself. In the 230+ years since, consumers have come to admire the domestic turkey for its ability to grow fat and large breasted, fast! The broad-breasted white grows to an average of 32 pounds in just 18 weeks. So fast that the bird develops a variety of health problems including leg and joint disorders, lameness, heart disease, and weakened immune systems.(3)

Turn these birds out from their factory farms and they’d certainly die. They can’t run – in fact, they can barely walk – or fly. They depend on large quantities of high protein food and hormones to support rapid grown. And – as a final insult – even if allowed the opportunity to mate, they couldn’t reproduce.

While turkey continues to be the centerpiece of Thanksgiving dinner, prices are continuing to rise. This year, wholesale prices for conventional turkeys are up about 28% and retail prices are expected to be up 20% over 2009. 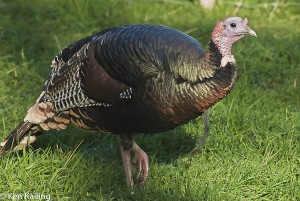 Consumers who want pasture-raised heritage breed turkeys are looking for birds that are well cared for, grow slowly, and have flavorful meat. Unfortunately they are expensive to produce.

Domestic turkeys are tough animals to raise. Poults (young turkeys) are fragile birds. They don’t tolerate heat or cold very well, they start out needing a very high protein diet and, until they are about 10 weeks old, they are at risk from predators while in the field. The heritage breeds are more robust than the broad-breasted whites and, once they are large enough to fend for themselves outdoors, they grow slowly, taking 24 to 30 weeks to reach market weight.

“We laugh – rather ruefully – that young turkeys are looking for a way to die,” said Louis Sukovaty, owner of Crown S Ranch. “They get chilled, they don’t drink enough or eat enough, they drown in their water basins, they get eaten by hawks or raccoons…” It’s these kinds of challenges that make pastured turkeys costly.

Compare that to QFC, a Seattle chain of supermarkets, which this week offered 24-pound turkeys for $7 with the purchase of $25 worth of groceries. 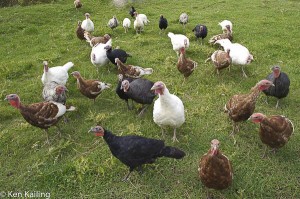 While pastured, free-range, antibiotic- and hormone-free, naturally raised heritage turkeys may more closely resemble the turkeys our great grandparents ate; they are being priced out of the reach of the average American.

Short of partnering with a turkey hunter or raising a couple of birds in the back yard, consumers looking for alternatives are buying from farmers like Sukovaty who sell direct. Every year, Crown S Ranch raises several hundred organic turkeys, both broad-breasted whites and heritage breeds. And they are a bargain at $6 or $7 a pound.