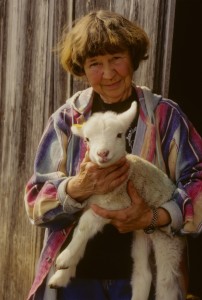 At 88, after writing for GoodFood World since January 2011, Lea McEvilly put her pen down due to failing eyesight. We thank her for her tenacity, her courage, and – especially – her sense of humor.

A child of the Great Depression and rural one-room schools, Lea dreamed of having her own farm. And her dream came true in January 1965, when she and her husband found 80 acres of rolling hills in southeast Minnesota, not far from the intersection of Minnesota, Wisconsin, and Iowa.

In her articles for Farm Talk, Lea describes her efforts to build up her flock, create a co-operative that used telecommunications to auction sheep and lamb meat directly to buyers, and grow a successful industry in Minnesota and the upper Midwest.

For 46 years Lea raised as many as 300 sheep at a time with just the help of her dogs – and an occasional llama. Farming is hard and letting go of a lifetime of farming is just as hard.

She found new homes for her own unique breed of sheep (a 5-way cross she devised) and turned her beloved farm over to her son to choose the future for the land.

Enjoy Voices from the Farm and read Lea’s sheep-raising adventures and misadventures. We begin at the beginning – and the end – with It’s All about Sheep!