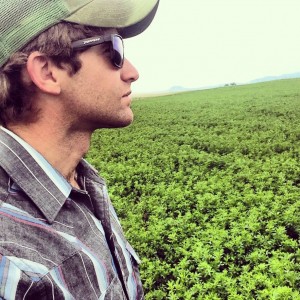 Casey Bailey studied Religion at a Liberal Arts College in California and worked at an inner city recreation center with kids in San Francisco.  After graduating in 2003 he returned to Montana, leased farmland, and entered the Music Program at the University of Montana in Missoula.  During that time he participated in an educational seminar in Guatemala through the Environmental Studies program.

Since then, Casey became a youth director at a Lutheran church in Great Falls, MT, worked on a campaign for 21st Century Democrats, began to practice organic farming, successfully graduated from the Policy Institute, served on the board of Montana Organic Association, and played in a number of ensembles at a wedding near you!

As part of the youth program he initiated a Community Garden that included high school students, faith communities, and Meals on Wheels, which used the produce in daily meals taken to elderly in their homes.

Casey is now solely focused on organic small grain farming and organic grass finished beef.  He bought a 1500 acre farm and, with great support, is transitioning the 3,000 acre family farm that he grew up on. He can also be found in the tenor section of the Great Falls Symphony Choir and if not there he is probably on his telemark skis in the mountains.

Achieving a degree in the social sciences expanded Casey’s imagination and allowed organic farming to find it’s way in. He believes in practice and becoming. Life is built upon invisible relationships that in the long run are fundamentally more powerful than market driven capitalism. These interrelations on both a human scale and a production agriculture scale hold the potential for emptiness and meaning.

Every day we must practice the choice of meaning in order to see that it is there.  It is his belief that this choice and awareness has a direct result on the health of our environment and the human population that it nourishes.

Here is a link to Casey’s GoodFood World articles and commentary.