Around 100 years ago there were hundreds of varieties of vegetable and fruit seed available to the farmer and home gardener. By 1983 those varieties had been reduced by more than a factor of 10.

Potatoes are the world’s fourth most important food staple after wheat, rice, and corn. And the potato is known to produce more food per unit area of land planted than any other major-planted crop.

There are over 4,000 edible varieties of potato, mostly found in the Andes of South America. However, in the US, of the top six potato varieties – yes, there is one category called “Frito-Lay Varieties,” primarily used for chips – four are a variation of russet potato, comprising 69% of potatoes grown in the US.

What happens when a country depends on a single variety of potato for sustenance? The Irish Potato Famine of the 1840s is a perfect example of how mono-cropping can lead to disaster. Lack of genetic variation in Irish potatoes was a major contributor to the severity of the famine, allowing potato blight to decimate Irish potato crops. The blight resulted in the starvation of almost one out of every eight people in Ireland during a three-year period.

But the greatest shortcoming of lack of crop diversity may lie in the compromised quality of those foods, and the long-term effect that has on your health.

The Way We Eat Potatoes 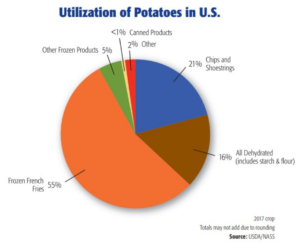 “Utilization” of potatoes grown in the US:

That means more than three-fourths of the potatoes consumed in the US are most likely eaten fried.

Today, 30 crops provide 95% of human food energy needs, 12 crops together with five animal species deliver 75 % of the world’s food today, and three of which – rice, wheat, and corn – are responsible for more than 60% of our energy intake.

Not only have we lost or ignored thousands of varieties of potato grown currently around the world, we are losing the many ways potatoes could be prepared. Wikipedia lists nearly 150 ways to prepare potatoes from dozens of countries.

How can we expand the variety of the food we eat? First, learn to cook. Be adventurous, try new recipes. Shop with the intent to eat a new vegetable at least once a week.

The best way to protect a crop variety is to eat it.

Bangers and mash anyone?