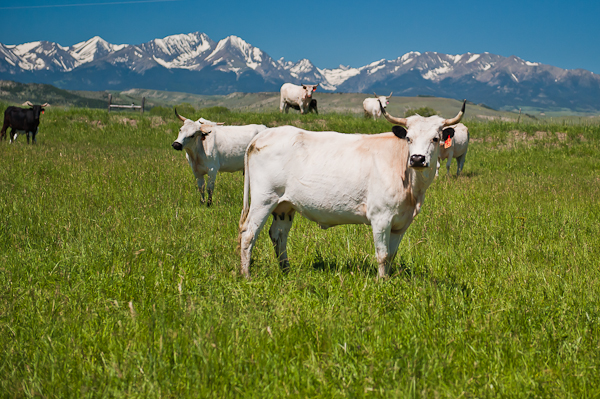 We all like to imagine that the beef we eat came from a cow living a happy-go-lucky life, frolicking on lush green pastures until a gentle and painless end. Obviously the average American does NOT want to meet their dinner while he/she is still standing.

However, the idea that you could, if you wanted, meet the farmer who raised your dinner, is not so far fetched.

In one of the early episodes of Portlandia, Carrie and Fred discuss in detail the origin of the chicken they are offered for dinner. Colin (the prospective entré) has a bound CV documenting his birthplace. While a book that weighs more than the chicken in question makes for good satire, how DO we learn more about the origins and sources of the meat on our plates? Colin may have had references, but very few of the animals slaughtered for your dinner get such recognition.

There is simply no easy way to track a single chicken, pig, or cow from farm to plate. Walk into any conventional big name supermarket and you’ll find miles of plastic-wrapped Styrofoam trays full of bright red steaks, roasts, and ground beef. You’re not likely to see any labels identifying where it was born and raised.

Why you probably CAN’T know where your meat came from

Over the last 75 years, the beef industry has evolved into an intense, industrial enterprise designed to put as much weight on animals as fast as possible and get the resulting meat to market as quickly as possible.

Agnes the Angus is nothing more than a meat factory packed cheek to jowl with others just like her/him into feedlots and (s)he is fed grain – lots of grain, most of which is genetically engineered – and antibiotics and hormones to bring him/her up to the target weight for slaughter in less than a year.

In 2015, the USDA reported that more than 34 million beef cattle were slaughtered, producing over 23.7 billion pounds of meat. Just four companies control 84% of the beef packed for sale in the US. In some slaughterhouses (the old-fashioned name for “meat processing plants”), a single pound of ground beef could contain meat from dozens if not hundreds of animals.

Consideration for the animals and the consumers who eat them has been overtaken by the drive for profit. In response to the damaging impact of feedlot production, more and more farmers and ranchers are choosing to return to, and improve upon, traditional methods of raising cattle on grass.

White Park cattle are a distinctive white with black or red “points” (feet, nose, ears, tail). Their horns vary in shape, but most grow curving gracefully forward and upward. They are well suited to non-intensive production, like rotational pasturing.

Better for the animals

Beef cattle are ruminants; that is, they have multiple stomachs. They are able to digest plant cellulose by regurgitating the semi-digested plants and chewing them again to break the matter down further. The roughage provided by grasses and other plants allows ruminants to produce saliva, which helps neutralize acids that exist naturally in their digestive systems.

When taken off forage and put on a diet of grain and other byproducts – many of which should never cross the lips of a cow – the animal produces less saliva, causing an increase in acidity within its digestive tract. In response to the acidosis, cattle will kick at their bellies, stop eating feed, and eat dirt. To treat the problem, they are often given plastic feed pellets for roughage, along with lots of chemicals, additives, and antibiotics.

Grain-fed cattle often suffer from a number of health problems including intestinal damage, dehydration, liver abscesses, respiratory and cardiovascular failure, and death. There are estimates that as high as one-third of all feedlot cattle develop liver abscesses.

High prices for corn and soybeans have sent cattlemen searching for something cheaper – but just as high calorie – to feed their cows. The solution? Candy! That’s right, candy. Cows are fed chocolate bars, gummy worms, ice cream sprinkles, marshmallows, bits of hard candy and even powdered hot chocolate mix. All without any “apparent” harmful effects on the cattle or the consumers.

Americans eat more meat than ever before, and most of it is high in saturated fats. Researchers have linked serious health problems such as heart disease, stroke, diabetes, and certain types of cancer to heavy meat consumption. One way to avoid all those saturated fats? Grass-fed meat…

Lower in total fat
Lower in the saturated fats linked with heart disease
Higher in beta-carotene
Higher in vitamin E (alpha-tocopherol)
Higher in the B-vitamins thiamin and riboflavin
Higher in the minerals calcium, magnesium, and potassium
Higher in total omega-3s
Healthier ratio of omega-6 to omega-3 fatty acids
Higher in CLA (cis-9 trans-11), a potential cancer fighter
Higher in vaccenic acid (which can be transformed into CLA)

Lower Fat – Meat from grass-fed cattle is much lower in fat, and therefore lower in calories. A 6-ounce steak from a grass-fed animal has almost 100 fewer calories than the same sized-piece from a grain-fed animal. The average American eats about 67 pounds of beef a year. Switch to grass-fed beef and you’ll save nearly 18,000 calories a year.

Omega-3 Fatty Acids – Omega-3 fatty acids are fats that are essential to human health. Sixty percent of the fatty acids in grass is omega-3, which is formed in the chloroplasts of green leaves. Meat from grass-fed cattle can contain as much as two-to-four times more omega-3 fatty acids than grain-fed animals.

At the same time, a high ratio of omega-6 to omega-3 fatty acids has been linked with an increased risk of cancer, cardiovascular disease, allergies, depression, obesity, and autoimmune disorders. A ratio of four to one or lower is considered ideal, grain-fed beef has a much higher ratio of omega-6 to omega-3 fatty acids than wild game or grass-fed beef. In grass-fed beef the ratio is approximately 2 to 1, while the ratio in grain-fed beef is more than 14 to 1.

As cities continue to grow and farmland moves farther and farther away, these are challenges that family farms and ranches, which want to maintain a direct connection to their customers, will have to manage.

If we don’t find ways to resolve transportation and distribution hurdles, we are doomed to getting our food through the complex, high-energy networks maintained by the conventional food system; a system controlled by only a handful of mega-producers.

Meet your meat, get to know your farmers, and give them the support they so desperately need to keep the fragile links in the independent “good food” supply chain connected.

Wise Use of Antibiotics, Union of Concerned Scientists, http://www.ucsusa.org/food_and_agriculture/solutions/wise_antibiotics/pamta.html

For additional information go to Eat Wild, a site maintained by Jo Robinson, author of Pasture Perfect, and source of the information on the nutritional value of grass-fed beef.