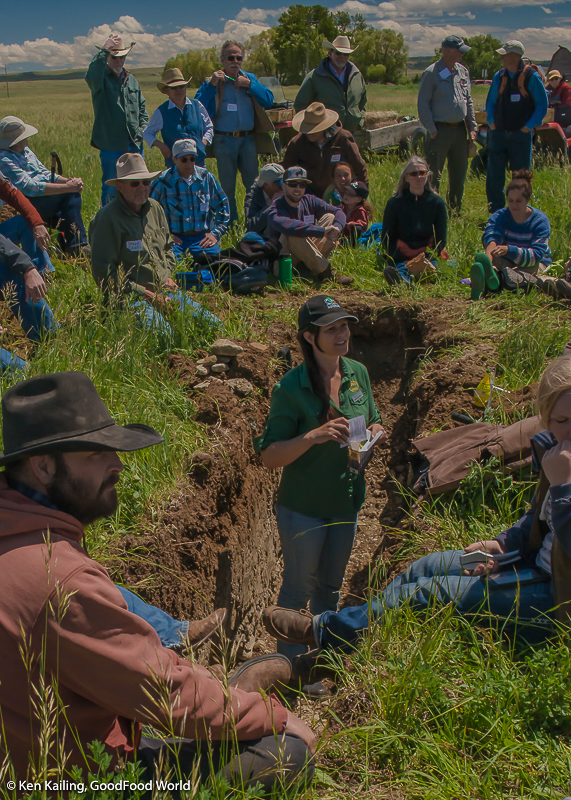 “We know more about the movement of celestial bodies than we do about the soil underfoot.”

When one of the world’s experts on soil health and land resilience (from Auckland, NZ, a 9,500 mile trek) is scheduled to lead a day-long workshop just 170 miles away, you do everything you can to be there! 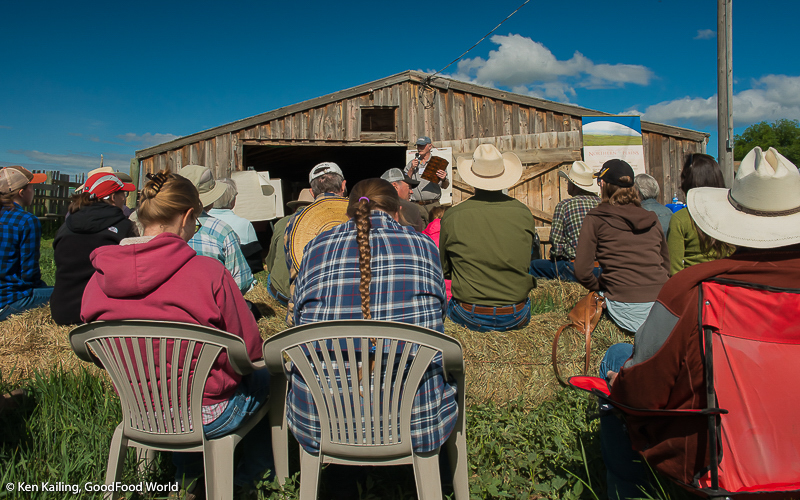 Nichole Masters, the director of Integrity Soils, is a social ecologist, systems thinker, and a trained adult educator. Nichole is passionate about getting farmers and ranchers back into control of their soil health and nutrients, and crop and animal management. By adopting a “soils first” – ground up – approach, she teaches methods that have positive effects on both human and environmental health.

Ranching and farming is all about producing food, and Nicole’s mission is to teach and support farmers and ranchers to ensure the food they produce is the best quality in the world now and into the future.

Following the highly energetic Ms. Masters across fields, pastures, and paddocks for 8+ hours reveals not only her knowledge, passion, and commitment, but her enjoyment of and sensitivity to soil as a living system. What’s under your feet is not “dirt!”

Nichole’s Soil Crawl covered a wide range of topics including:

Regenerative Agriculture and a Soil Crawl in Big Timber, Montana

Sponsored by the Northern Plains Resource Council (a grassroots conservation and family agriculture group formed to protect the Montana’s water quality, family farms and ranches, and unique quality of life), the Soil Crawl brought together 70+ people ranging from toddlers to octogenarians, ranch owners and managers to educators and agency staff.

Weather in mid-June in south central Montana can be changeable. However, for the day the Crazy Mountains towering to the west snagged and held advancing rain clouds until sunset. That gave us warm and sunny weather and the occasional sunburn. 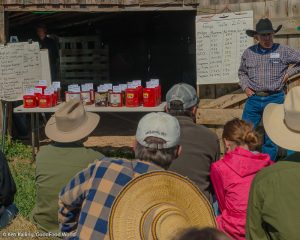 The day started with the group seated on hay bales and in lawn chairs on Roger and Betsy Indreland’s ranch, cradling cups of hot coffee in the cool morning, and eager to learn more. Nichole and Roger started the day talking about soil test results, the success (or not) of adding organic nutrients like kelp and compost tea, and the need to monitor pasture and grazing patterns to prevent overgrazing.

Roger described a method to increase plant diversity that had the audience smiling and ranchers making notes. Taking a page from Nature’s handbook and looking at the way bison contributed to the biodiversity on the land they grazed, Roger mixed seeds specific to dry, wet, and mixed moisture areas into mineral rations fed to the cattle. While they move across the fields, the cattle “seed and fertilize” by leaving manure behind. Some seeds germinated better than others, and the common trait seemed to be size – the smaller the seed, the more likely it could pass through the animal and flourish. 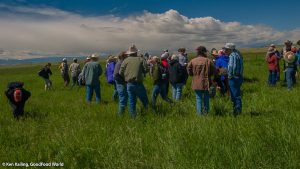 As the day warmed, the group spent the day exploring the soil, the grasses, and the fauna (from the microscopic to the macroscopic) flourishing above and below ground. We learned, for example, that healthy pastures have more dung beetle activity. The beetles help break down the pats by creating holes and pathways through the dung, letting water infiltrate and slowly dissolve it, and return the nutrients to the soil. That sent us off with loupes to count the number of dung beetle larvae in various cow pats.

Nichole and Roger led us, like straggling calves, across pastures on the Indreland Ranch where we overturned “cow pies” and counted dung beetles and their larvae, and examined forage plants and the occasional weed. 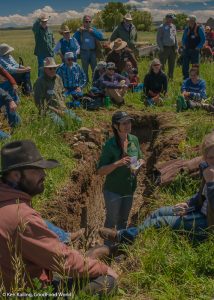 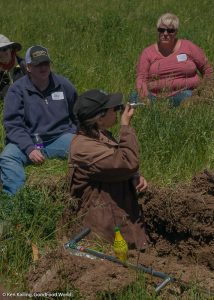 In a trench nearly reaching her armpits, Nichole measured the depth of topsoil and root growth, and discussed the importance of invertebrate and microbial life in the soil. She demonstrated elements of the carbon cycle and described the importance of carbon and microbial life in the soil. Using a reflectometer to check the amount of sugars in the crushed leaves and stems of forage plants (BRIX test) is one way to measure of photosynthetic activity. 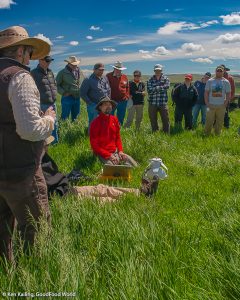 Water infiltration is measured using a circular pipe with a 1 square foot surface area that has been driven into the soil. Tony poured 1 gallon of water into a dam created by a piece of black plastic. As an observer readied a stop watch, he whisked away the plastic and measured the time it took for 1 gallon of water to soak into 1 square foot of soil.

Healthy soil absorbs water quickly – in this case, 7 to 11 seconds. Unhealthy soil – compacted, and with fewer healthy microbes – can take 15 minutes or more (up to an hour) to drain. As a result, poor soil is prone to flooding, ponding, and soil erosion.

“Soil carbon is the stable stuff that gives soil its lovely chocolate brown color, and it’s what holds on to the moisture,” said Ms. Masters. Each carbon molecule has the potential to hold 20 molecules of water, so small increases in soil carbon go a long way in carrying capacity. An increase in carbon by 1 percent creates an increased holding capacity of up to 15,000 gallons of water per acre down to a depth of 12 inches. And in Montana’s ranching country where the average rainfall is 14 to 16 inches annually, “holding capacity” is critical.

Because soil respiration is a strong indicator of the biological health of soil, it can be used to measure the impact of changing agricultural practices. The bell-shaped dome of a portable soil respiration system measures the concentration of CO2 in the upper soil layers and the atmosphere near the soil surface. The production of CO2 in the soil is influenced by environmental factors such as soil moisture, and Tony was able to clearly demonstrate how the addition of water stimulated the increase in CO2.

Tea Time – Compost Tea, That Is 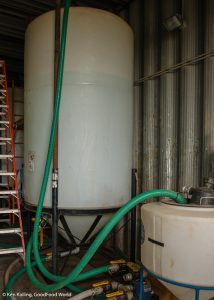 Organic ranching means substituting natural soil amendments and weed control for synthetic ones made of petroleum products and other man-made chemicals. Wes Henthorne, B-Bar Ranch, has tried many solutions, and is currently experimenting with “home brewed” compost tea.

Made of clean fermented compost, fish emulsion, and molasses, compost tea is more like home-brewed beer than anything else. As the bacteria in the fermented compost devour the nutrients in the molasses and the compost, a dark rich liquid is produced.

Once the tea is ready, it is pumped from the fermentation tank into a spreader made from a recycled bulk milk tank, tubing, and a pump, with an elevated sprayer attached. The sprayer nozzle is high enough that the tractor driver can see if it is functioning correctly without having to stop the vehicle. The tank can hold hundreds of gallons of tea and treat hundreds of acres of pasture.

A partnership with the county has allowed Wes to treat roadside weeds on roads surrounding his ranch with a variety of methods and still keep the buffers required by organic regulations. Fire has proven to be the most effective weed control and a team of “burners” (pulling a propane tank with a fuel nozzle) and “dampers” (pulling 500 gallon tanks of water with sprayers) is the best way to control both the weeds and any runaway flames.

Down and Dirty – a Pile of Reasons to Fall in Love with Soil, Nicole Masters
200+ Videos: Nichole Master’s on Soil Health
Regenerating Landscape with Cover Crop Cocktails and Planned Grazing, Gabe Brown
Keys to Building a Healthy Soil, Gabe Brown

The Living Soil: Evidence of the Importance to Human Health of Soil Vitality by E. B. Balfour, first published 1943, with eight more editions through 1948.

[1] BRIX Readings, and What They Tell Us, http://www.ag-usa.net/brix_test_meaning.htm