Osvaldo and I were talking about the ole bees, bouncing around in the back of a truck that was heading down a path, which would have been a nice stroll on foot. I told him about beekeepers in Ethiopia who still used traditional—euphemism for ancient—honey methods, meaning they climb trees and hang tubular, woven baskets, which eventually fill up with wax, honey and bees. Then the farmers must lower the baskets and stick their hands into the organic, dangerous mess.

“Sometimes, I don’t think we should be taking the honey from the bees. We are stealing from them and taking something that is not ours,” he says. “So we have to make sure to give back to the bees whenever we can.”

It was the second time on the job in which I had underestimated the power of bees. You can’t just go and take a photo of beekeeping. It’s not that easy. The bees try really hard to protect their hive and their honey, and maybe that is part of why Osvaldo identifies the activity as theft. For him, it would be the same with cows, sheep, silk worms or oysters.

We are the species specialized in taking. Over a lifetime, we take much more than we give, and though we are capable of giving, we rarely do. Osvaldo’s ideas were not just one man’s sympathetic concerns for the hive, but a general mentality shared by his indigenous family and community, the Arhuaco, who live and thrive in the Sierra Nevada de Santa Marta in northern Colombia.

I made a visit to the group after local government leaders committed public funds to bring hundreds of rural families into the local agro economy through apiculture. Since most of the lands surrounding the Sierra Nevada and the Sierra Perijá (mountain chain dividing Colombia and Venezuela) are protected or restrict land use, the environmental friendly parameters of beekeeping offer the Arhuaco an sustainable alternative to ranching, which is strictly prohibited.

I went to visit the new beekeepers and hear their stories of how Colombia’s armed conflict brought nothing but problems to their lives. In fact, the Arhuaco had tried beekeeping before, but the guerrilla tried to get them to join the resistance. The paramilitary groups, the ones claiming to fight the guerrilla, plundered hives and forced them to move higher into the mountains, up to steeper land, colder temperatures, but also closer to the center of the universe.

The mamo is an Arhuaco spiritual leader who brokers the deeds of man with the needs of the natural world. His wisdom and knowledge level out a balance between our actions and the mountains, themselves an allegorical representation of life: the permanent snow-capped peaks represent the head, highland moors are the heart, the rivers and canyons, the veins, the ridges represent muscles and the hair is grass. The water is the blood.

The mamo led us to a clearing in the forest where I assumed they take all the outsiders, the gringos, the colonos, mestizos and the bonachi, as non-indigenous folks are called in these parts. We removed our shoes, sat down on a log and waited for instructions. A young Arhuaca woman was translating the mamo’s messages. When I asked for permission to photograph the ceremony, the mamo replied: if you are a friend, then taking photos is no problem. Simple enough, I thought.

The cleansing is a formality that allows the mamos to suss out the visitor’s motivation, and use that to guide meditation. The mamo gave each of us a small ball of cotton and asked us to separate it into two pieces, one in each hand.

“First the mamo wants us to think about the work we are undertaking today.”

We meditated for several minutes. After that, out of each ball of cotton, he ordered us to create four separate strings. We continued holding the cotton in each palm.

Throughout the ceremony the mamo dipped a long stick into his poporo, a hollow gourd containing powdered lime, usually prepared from seashells collected on the Caribbean coast washed and charred in fire. Each time, he licked the stick, dipped it into the poporo, and placed a small but significant amount of lime onto the wad of coca leaves in his cheek, causing a chemical reaction with the coca leaf mash and releasing the stimulating alkaloids.

For the Incans, the coca plant was a gift from the gods meant to improve the lives of humans, but seems to have been primarily used by religious leaders and the elite caste. In Colombia and on the Caribbean coast, there is evidence that the coca leaf was used by all, as supported by the writings of Amerigo Vespucci from 1499:

All of them had their cheeks full of a green herb that they chewed constantly like beasts, so that they could barely speak; and each one carried about his neck two gourds, one of them full of that herb that they had in their mouths and the other of a white powder that looked like pulverized plaster, and from time to time, they dipped a stick into the powder after wetting it in the mouth, then put the stick in the mouth, an end on each cheek, in order to apply powder to the herb that they chewed; they did this very frequently. We were amazed at this thing and could not understand its secret or why they did it.

So, important, the coca leaf is woven into nearly every interaction. When Arhuaco men greet each other they reach into their mochilas, pull out a handful of leaves, and simultaneously give and receive the gift. Mamos and Arhuaco men use the coca leaf to improve meditation, suppress hunger and as medicine. When a boy becomes a man, he receives a poporo and is expected to take it very seriously. It means he can chew the coca leaf and he can go out and start a family.

In downtime, the men rub the stick around the mouth of the gourd leaving a polished hue on the gourd’s lip. This action, too, is one of meditation, and a time when the man is supposed to be placing his thoughts on his wife and their relationship. As one colleague put it: “the longer they rub the gourd, the longer their bonds of love will last.”

After we meditated the second time, the mamo looked in my direction. He placed his poporo on one foot while fishing for things in his pocket. At the same time he spoke in a soft flutter to the interpreter.

“Mamo wants to know if near your village there is a body of water?”

“The mamo has here some stones and you are being told that when you get to your village, you deposit those stones in the water.”

I wasn’t expecting to be made an actor in the mission to equalize our work and the natural world. The mamo recruited me, the gringo with the camera, as a messenger to deliver the ingredients of peace to my people. Perhaps the most important stone that he gave me was an ox-eye gemstone, shaped like a small egg. This stone most likely represents the earth and bringing it together with waters of the Great Salt Lake will allow this Arhuaco community to effect some kind of balance in my community, because where there is balance with Mother Nature, there is peace. 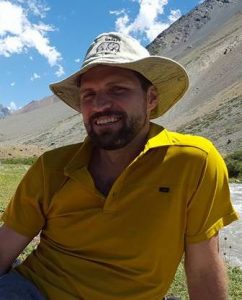 Nicholas is an NGO writer currently based in Bogota, Colombia and working on a large land tenure program that encourages the government to better serve millions of victims displaced by the violence.

Over the past six years, he has worked mainly on agriculture-focused projects in Ethiopia, Liberia, Uganda and Somalia, among others. He specializes in NGO documentation, communications, and PR, and teaches local writers how to create attention-grabbing stories for their NGOs.

On his weblog you can find stories from his immigrant life, some thoughts on development aid, and a strong dose of rock climbing and adventure.

Here is a link to Nicholas’ GoodFood World articles and commentary.