Our real life-blood here in the Northwest is not reflected in the 50-plus-story glass and steel monoliths we build as an edifice to airplanes, computer software, and agricultural exports (grain, alfalfa, etc.), they are comparatively short lived: less than 100 years old and not likely to last another 100. It’s the wild salmon and the intrinsic and indigenous human culture that goes back at least 10,000 years that hold us together in a web of life so intricate and adaptable it withstood the Ice Age. 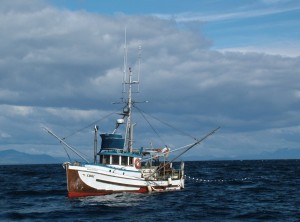 Wild salmon are without question the heart and soul of our region. But newcomers aren’t told that, and most of the rest of the US population can’t relate or doesn’t even care, having fallen into a fish food culture that values greasy breading and spicy sauce over the fish inside as a culinary fix. Ironically, to keep our wild salmon alive in the natural fishery and to sustain ourselves, we’ve got to eat them. Unfortunately, we don’t!

First, we don’t eat as much highly nutritious seafood as we should even when we live right on the water. Instead, we eat hamburger, or we eat the lower grade factory-farmed (soon to be genetically enhanced) salmon imported and hauled in to flood our markets because it’s cheaper. It’s even dyed to appear more natural and mildly flavored enough to avoid challenging unsophisticated American palates. By eating imported farmed fish, we may even think we are saving Nature’s wild salmon.

Save nature by eating factory food? That’s really propaganda that real estate people are happy for us to believe as they develop our shore lands where prices sky rocket on “seaside estates” now being grabbed up by wealthy buyers from as far away as Asia and India.

Meanwhile, industry, municipalities, a multitude of cars and trucks, as well as every kind of waterborne conveyance imaginable – giant freighters, “floating city” cruise ships, personal yachts, and pleasure craft – continue to dump raw sewage and toxins into our bays and estuaries polluting and killing our fisheries.

Because salmon are anadromous – meaning they divide their lives between freshwater and the ocean: they are born in freshwater, mature at sea, and return to their natal streams to spawn a new generation – the protection of natural watersheds is vital. Instead they are being settled, lumbered, mined, you name it.

Corporate and industrial food (all big businesses) believe that if we eat inferior quality but easily managed, grown, and processed factory fish, we don’t need to support and protect the natural salmon ecosystem. It can be used more efficiently and economically for other – revenue-generating – projects.

If that’s the case, then we don’t need any of what we’ve come to associate with our Northwest: not the wild fish; not their relatives, the indigenous Northwest people; not the pristine upper meadows, riverine forests, and grassy estuaries; not the best managed fishery left in the world; and certainly not the small commercial fisherman who sustain it. We can become just like everywhere else. Or not quite, our natural areas will become nothing more than real estate amenities for the very wealthy.

So where exactly does the remaining high-quality wild fish catch go? You guessed it! It’s exported by the moneymen to be sold to the highest bidder. Nearly all Alaska sockeye is exported to Japan frozen or exported canned to the UK.

The same is happening with all our food products in the US: the best of the best is being exported at high prices and cheap, poor quality food products are being imported. Americans simply don’t know the difference. Meanwhile, the environment is rapidly going even further to hell!

Money spent to clean up Puget Sound and other vital waterways can come from restoring a sustainable market for our local fish and seafood. Such a simple idea is, of course, totally against the grain of current logic.

At the Federal level, the President has little concern for the environment, the wild fishery, or indigenous people; he sees the base of our world power especially in exports and energy. We must correct the gross imbalance of exports and imports if we are going to survive climate change.

And a lot of us living in the Pacific Northwest believe protecting our wild salmon is the right thing to do; that it’s even a spiritual obligation.

Wild salmon is on our minds at GoodFood World! If you are anywhere in the region this week, we hope you will connect with a salmon celebration – here in Seattle at the Fishermen’s Fall Festival at Fishermen’s Terminal or in British Columbia at the Wild Salmon Convergence.